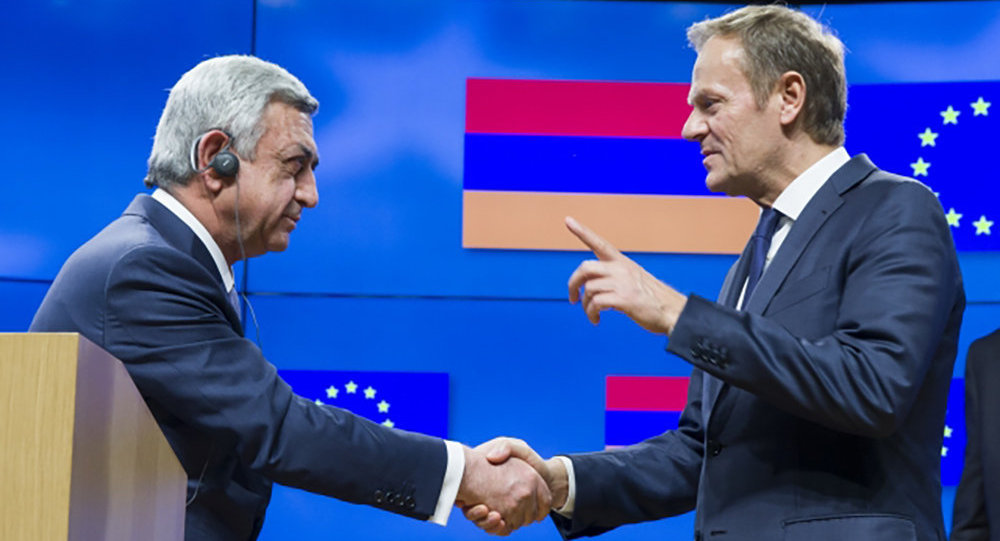 The European Union (EU)-Armenia Comprehensive and Enhanced Partnership Agreement (CEPA), an instrument of European Neighborhood Policy, was signed on 25 November 2017 at the 5th Eastern Partnership (EaP) Summit in Brussels. The Agreement, considered as being “ambitious” by Donald Tusk, President of the European Council, and by Federica Mogherini, High Representative of the EU for Foreign Affairs and Security Policy, foresees cooperation between EU and Armenia in many areas.[1] As it can be remembered, the negotiations between the two parties that had started in July 2010 were interrupted by Armenia in 2013 due to its decision to join the Eurasian Economic Union in 2015.[2] However, the EU’s willingness to see Armenia in the EaP resulted in the restarting of the negotiations and this process ended up with the Armenia’s signature of long-anticipated Agreement on last Friday. Henceforth, the relations between Armenia and the EU will shape around the Comprehensive and Enhanced Partnership Agreement.

One of the reasons behind of EU’s strong willingness on Armenia has derived from the perception of the growing Russian influence in the region. In the opening speech at the Brussels Summit, European Council President Tusk condemned Russian aggression in the region and once again pointed out the EU’s strong opposition against annexation of Crimea. Tusk remarked that the common future of the EU and its partners depend on stability and prosperity, and stressed the necessity of the resolution of frozen and armed conflicts.[3] An important point that should be noted here is that the attitude being exhibited by the EU on the subject of Crimea is not being displayed on the subject of Armenia’s aggression in the territory of Azerbaijan. In the Preamble of newly signed Agreement, the paragraph about the resolution of Nagorno-Karabakh conflict paradoxically includes a statement on territorial integrity as well as the principle of self-determination.[4] In addition to this, Article 8, despite carrying the title “Regional Stability and Peaceful Resolution of Conflicts”, has a far-reaching scope, but does not include any concrete proposals. It is pointed out in the Article that the parties shall engage in coordination by adhering to the goal of ensuring Europe’s security.[5] This paradoxical approach of the EU, which has expressed its sensitivity many times regarding the enabling of a stable environment, is an obstacle for the stability within the Eastern Partnership and of the regional countries.

With the content of the newly signed Agreement, EU has gained a legal ground now to take a more effective role in Armenia. It is envisaged that this situation will make the EU, which is the second largest actor in Armenia’s economy, more effective in the politics of Armenia. The first part of the Agreement titled “Political Dialogue and Reform” includes several issues about fighting against corruption, good governance, strengthening constitutional structure, democratization, and human rights and fundamental freedoms.[6] It remains to be seen within the next years how much the EU’s normative instruments will be implemented in the framework of the goal of Europeanizing Armenia. Thus, it is assumed that the underlying goal is to make Armenia more aligned with the EU through institutional and legal reform and to attempt to (to a certain extent) break Russia's influence by increasing EU’s influence.

The comprehensive structure of the Agreement arranges areas of cooperation regarding economy and trade between the EU and Armenia. The Section, prepared in accordance with the previously determined 2017-2020 Priorities[7], includes cooperation and regulations for increasing Armenia’s trade capacity and eliminating the country’s disadvantages arising out of its landlocked position. It is observed that particular attention has been paid to prevent incompatibility with the Eurasian Economic Union’s structure, which Armenia joined in 2015. Considering that Russia sees the Eastern Partnership as a threat to its interests and area of influence, it seems that the new Agreement has been configured so as not to conflict with Russia's hesitations.[8] This situation can be interpreted as an indication of Armenia’s privileged position from the perspective of the European Union.

At the Fifth East Partnership Summit, an Aviation Agreement was signed on November 24, which can be considered as a complement to the Deep and Comprehensive Partnership Agreement.[9] Due to the geographical features of Armenia, this Agreement creates a new framework for overcoming disadvantages of its landlocked position. Considering the social impact of the rapprochement with the EU and the new job opportunities that Armenian citizens may take advantage of, it is observed that Armenia attaches importance to the said agreements, seeing them as instruments for balancing Russia. As is always the case, Armenia is trying to use these agreements it has made with Russia and Western countries and organizations with the aim of balancing these forces against each other. This makes it doubtful whether the Armenian government will be able to act as an independent country or, in other words, act despite Russia during the implementation phase of the agreements signed with the EU.

Considered from this point, the EU-Armenia CEPA has a particular importance both for the EU and Armenia. The privileged status bestowed by the EU to Armenia, which at many times in the past has put Russia in the forefront in its relations with the EU, has not been subject to change. On the contrary, this ambivalent attitude of Armenia has been rewarded. From the EU’s point of view, it is assumed that these agreements may provide a rapprochement between the EU and Armenia or that they will enable Armenia to pursue multilateral politics. However, to what extent Armenia can maintain its will to get closer to the EU or to what extent Russia would allow this rapprochement has not yet been assessed by the EU, or the likelihood of failure of such a rapprochement is ignored.