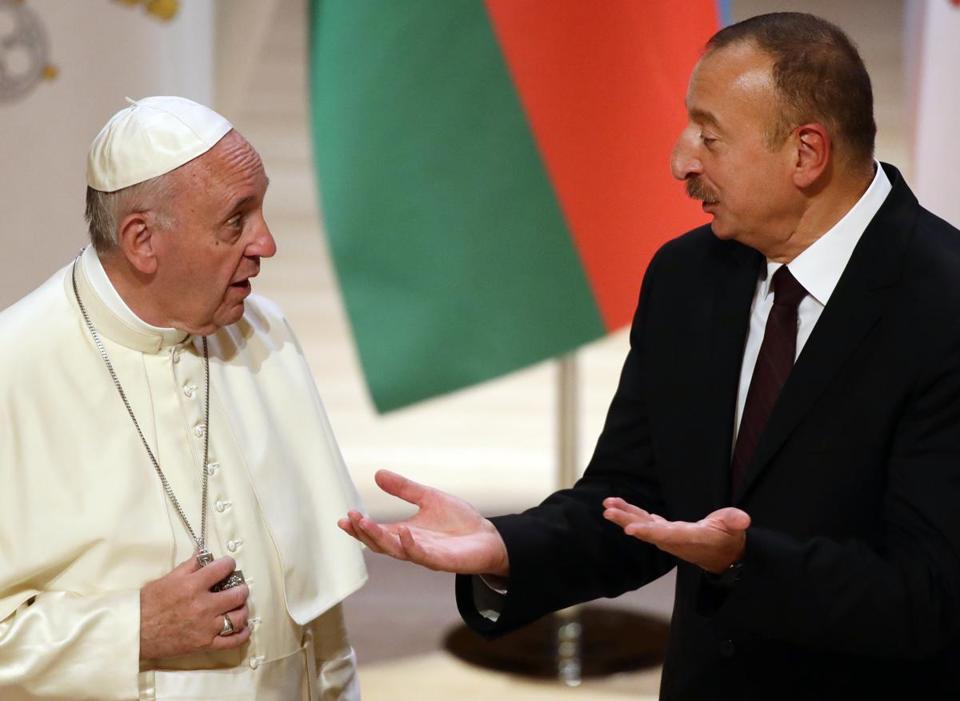 Firstly, Azerbaijanis monitored Pope Francis’s visit to see if he continued to overlook the historical suffering of Muslim people at the hands Christian people. They specifically wanted to see if the Pope would mention the Khojaly Massacre committed by Armenian groups during the Karabakh War. Unfortunately, he did not. He did not call for the Armenians in Armenia to come to terms with the crimes committed against Azerbaijanis. What is even more perplexing is that Pope Francis did not even bother to allude to the Khojaly Massacre.

Secondly, the Azerbaijanis awaited for a call from Pope Francis for an end for the occupation by Armenia for the Nagorno-Karabakh region and the adjacent seven regions of Azerbaijan. Unlike the case with the Khojaly Massacre, Pope Francis did allude to occupation by Armenia. However, the end result for the Azerbaijanis was similar to his omission with the Khojaly Massacre. It was a disappointment because his reference resembled more of an omission. Pope Francis made the following statement: "There is no alternative to patiently and assiduously searching for shared solutions by means of committed and sustained negotiations… to the many people who suffer the effects of bloody conflicts."[i] In Armenia he had stated:

I will speak to the Azerbaijanis about the truth, of what I have seen, of what I feel. I will encourage them too. I have met the President of Azerbaijan and have spoken with him. I will also say that not making peace on account of a small patch of land – because that is all it is – means something grim . . . But I say this to all, Armenians and Azerbaijanis. Perhaps you aren’t agreed on the modalities of peacemaking, and this you have to work on.[ii]

Even though it was not as derogatory as his speech in Armenia, his speech in Azerbaijan only called both sides to the negotiation table. This is an unfortunate implication by Pope Francis as if the burden of responsibility of the occupation of Azerbaijan territory rests on the shoulder of both sides.

Thirdly, despite his claim to be in a “pilgrimage of peace”, the Azerbaijani people were not able to actually feel the heartfelt closeness that for example the people of Armenia or Georgia could feel in his visit to those two countries. In Georgia, for example, he did make a reference to the Christian Orthodox Georgians who were displaced and became refugees after the 2008 war. In Azerbaijan, despite President Ilham Aliyev statement that the Azerbaijani people had “…faced a humanitarian catastrophe…” during Nagorno-Karabakh conflict, Pope Francis remained silent about the Azerbaijani refugees victimized by the Karabakh conflict.[iii]

Fourthly, what is interesting is that there was a message Pope Francis was interested in delivering to the world. Yet it was not a message to the whole world. The message he wanted to deliver wasn’t to the Christian world. He wanted to address the violence committed in countries in which Islam is predominant. He stated that “We see the growing emergence of rigid and fundamentalist reactions on the part of those who, through violent words and deeds, seek to impose extreme and radical attitudes which are furthest from the living God”.[iv] The message here is open to interpretation that it was to condemn the persecution of Christians and non-Muslims by the de facto “State” in Iraq and “Syria”.[v]

The appropriateness of such a message, of a Christian leader, to the Muslim Word, in one of the most secular state with a predominantly Muslim population deserves to be questioned.

By finishing his Azerbaijan visit, Pope Francis has concluded his final visit in the South Caucasus.  In his trip to Azerbaijan, his messages unfortunately lacked character and depth. They neither offended the people of Azerbaijan, nor did they make them feel warm hearted. He did not address the injustice the Azerbaijani people have suffered over the years in the region at the hands of their neighbors which Pope Francis had visited a short while ago.

Over the course of five month Pope Francis has visit all three South Caucasus countries. During these visits, at times he provided the public of these countries and the international community with contradictory and inconsistent moral messages about peace. These require further serious compressive in depth analysis.