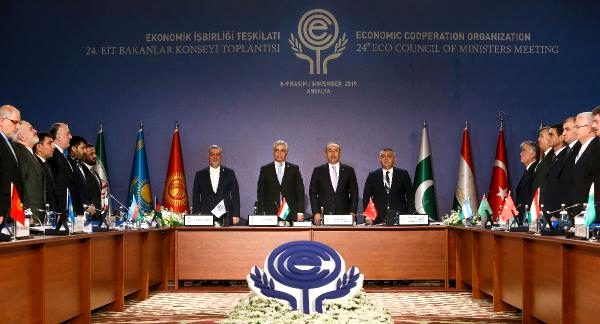 The 24th Meeting of the Senior Officials and The Council of Ministers of the Economic Cooperation Organization (ECO) were held in Antalya on 8-9 November 2019. As a result of this meeting, Turkey took the chairmanship of the ECO from Tajikistan. This would lead our country to pursue more active policies within ECO which has a deep-rooted history.

The roots of the ECO can be traced back to the establishment of the CENTO[1] in 1955. The CENTO, which was in fact a defense organization, gained an economic characteristic within time through the development projects which were intensified on communication and transportation[2]. The Regional Cooperation for Development (RCD), which constituted the economic side of the CENTO and was established in 1964 in Istanbul and was institutionalized in 1977 through the Izmir Treaty, is regarded as the predecessor of the ECO.

This organization was established by Turkey, Pakistan and Iran which share deep-rooted and common historical and cultural heritage. When the circumstances of the era are taken into consideration, it can be stated that this cooperation field was very effective and helpful in terms of improvement of the relations of the member states. The establishment of the RCD can be interpreted as the efforts to maintain and enhance the regional cooperation, especially where the USSR was posing threat, within the framework of Euro-Atlantic structure.

Nevertheless, in the aftermath of the change of regime in Iran in 1979, the activities of the RCD decreased and the organization became dysfunctional. On the other hand the absence of a functional regional organization was clearly felt. Therefore, the cooperation was re-established yet again by Turkey, Pakistan and Iran six years after the Islamic Revolution, in 1985, but this time as “Economic Cooperation Organization”.

It can be stated that especially following the disintegration of the USSR and the independence of Central Asian Republics, a new era started with regards to regional cooperation and opportunities. In this framework, in addition to Turkey, Pakistan and Iran, Afghanistan, Uzbekistan, Turkmenistan, Kyrgyztan, Kazakhstan and Tajikistan were accepted as members during the extraordinary meeting of the Council of the Ministers of the ECO held in Islamabad in 1992 and the number of member states increased to 10.

This development demonstrated that the relations which were interrupted with the Central Asian and South Asian countries, which we share important historical heritage, due to the impact of the USSR, could be developed within the framework of the ECO.

The primary objectives of the ECO are the sustainable economic development of the Member States, removal of trade barriers and promotion of intra-regional trade, the ECO region’s playing greater role in the increasing world trade, development of transport and communications infrastructure linking the Member States to each other and the world, economic liberalisation and privatisation, mobilizing the resources of the ECO region, effective utilization of agricultural and industrial potential of the ECO region, prevention of drug trafficking, ecological and environmental protection and strengthening of historical and cultural ties among the peoples of the ECO region, establishment of mutually beneficial cooperation with regional and international organizations[3]. In line with these objectives the ECO has been a multi-faceted international platform with regards to improvement of relations between our country and the member states.

Turkey has been closely following the activities of the organization conducted by the various institutions and actively contributing to them. Turkey previously assumed the presidency of the ECO during the 11th Summit and the meeting of the 19th Council of Ministers held in Istanbul on 20-23 December 2010. The presidency was shifted from Iran to our country at this meeting. Our country hosts the Directory of the Agriculture, Industry and Tourism of the ECO whose secretariat is located at the capital of Iran, Tehran. In addition to these, it is also worth to mention that the founding document of the ECO is titled as “the Izmir Treaty” which refers to the constituent meeting held on 12 March 1977 in Izmir.

Another important aspect of the ECO with regards to our foreign policy objectives can be evaluated through the relations between the ECO and Turkish Republic of Northern Cyprus (TRNC). The removal of unjust isolation towards TRNC and the Turkish Cypriots are among the foreign policy priorities of our country. An important outcome of our efforts in this direction has been the acceptance of TRNC with the name of “Turkish Cypriot State” as observer member in the ECO in October 2014. In this context, the ECO is among the international organizations, together with the Organization of the Islamic Cooperation, that accept TRNC as observer member with the name of “Turkish Cypriot State” at international level.

As it can be observed the ECO has important functions in terms of regional cooperation and stabilization efforts. The re-establishment of the organizations due to the need of its presence, despite its abolition, is one of the main indications of this situation.

As a massive regional organization with 8 million km2 landscape and half billion population, the importance attached to this cooperation mechanism in our foreign policy is also obvious. Assuming the chairmanship for the fourth time and representation of our country in this ceremony at the level of minister are the repercussions of the importance attached to this organization.

The chairmanship of Turkey provides important opportunities with regards to several aspects and can be anchor in terms of regional stabilization and development of relations with the regional organizations, which are among our foreign policy priorities, and recently announced “Asia Anew” policy. Especially the ongoing issues in the region are taken into consideration, as an important center of power Turkey can increase the effectiveness and the visibility of the organization and accelerate the reform process of the ECO.