PARLIAMENTARY ELECTIONS IN ARMENIA AND THE IRREGULARITIES TOLERATED BY THE EU
Commentary No : 2017 / 33
Hazel ÇAĞAN ELBİR
18.04.2017
5 min read 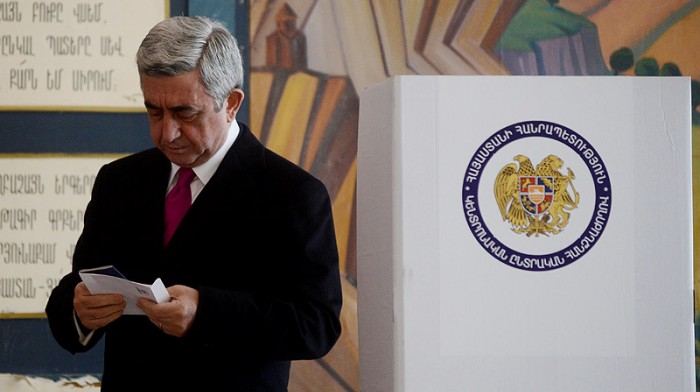 On Sunday April 2, 2017, Armenians went to the polls for parliamentary elections. According to the election results, as expected, the Armenian Republican Party under the leadership of Serzh Sargsyan took first place with 49% of the votes. This election is an important step for Armenia. After the referendum in December 2015, it was decided to transition from semi-presidential system to parliamentary system[1]. With this change, steps have been taken to reduce the powers of the President and to strengthen the Prime Minister and Parliament.

With regard to the elections held on 2 April, the public and observers are not in consensus on whether the elections were held fairly. One of the reasons that create suspicion are claims regarding the casting of votes in return for money. These claims were also confirmed by international observers from the Organization for Security and Cooperation in Europe (OSCE). Vote-buying and the intimidation of voters during the elections were also pointed out by Heidi Hautala[2], the Head of the delegation from the European Parliament. As in the elections on May 6, 2012, this year’s election was also observed by OSCE. OSCE observers who observed the parliamentary elections in Armenia have revealed that there were irregularities in the elections held this year as was the case in the 2012 elections. In the 2012 election results, in which the Armenian Republican Party, under Sargsyan's leadership, was the first party with 44.02% of the votes, although it was pleasing that there was no acts of violence, the fairness of the elections were overshadowed by cases of "vote-buying", voting papers being filled with beforehand and multiple voting.[3] While the EU has drawn a relatively positive picture regarding the 2 April 2017 elections, it also mentioned instances of vote-buying, intimidation of voters, pressures on civil servants and private sector employees, and pointed out that this has led to the shaking of public confidence. Nevertheless, it stated that the election result reflected the choice of the Armenian people[4]. Yet, ‘vote-buying' has become a tradition in elections in Armenian[5]. Such cases have been recorded in previous elections[6]. It is reported that the final report of the OSCE observers will be issued approximately eight weeks after the end of the electoral process[7].

In the 2017 parliamentary elections, despite some minor technical problems and relatively few irregularities compared to previous years, cases of multiple voting were recorded by observers[8]. Yet, in spite of all these irregularities, it is significant that the European Union (EU) expressed its respect for the elections of the Armenian people. It appears that the EU is pleased that the Armenian people are standing behind Sargsyan. The EU is known for its different approach to some of the Eastern countries, including Armenia. However, the EU’s assessment of the election frauds as a normal situation is an attitude that shouldn’t be adopted by an international institution that is supposed to be impartial and fair. Furthermore, EU is also expected to be impartial and fair. This attitude is also incompatible with principles of justice.

Two weeks before the elections, on March 21, 2017, the "Comprehensive and Enhanced Partnership Agreement" (CEPA) was initialed between the EU and Armenia within the framework of the "European Union Eastern Partnership"[9]. The aim of this partnership agreement is not only to support Armenia, but also to improve relations. This agreement is one step behind of the Eurasian Economic Union agreement between Armenia and Russia, which was signed in 2013 after Armenia returned from the verge of signing an agreement with the EU.[10] Therefore, this agreement will not bother Russia. Yet, as suggested by its very name, CEPA is an agreement within the framework of the the EU’s policy of opening to eastern countries.

The CEPA, which has been initialed between the EU and Armenia, is expected to be signed at the ‘Eastern Partnership Summit' in November 2017[12]. At present, Sargysan has time until November 2017. As long as Russia does not object to the agreement, Armenia will be able to sign CEPA. If Russia approves the signing of this agreement between the EU and Armenia, President Serzh Sargsyan will not hesitate to sign the agreement.

[4] “Statement by the Spokesperson on the Parliamentary elections in Armenia, ” accessed 10 April 2017,  https://eeas.europa.eu/headquarters/headquarters-homepage_en/24071/Statement%20by%20the%20Spokesperson%20on%20the%20Parliamentary%20elections%20in%20Armenia

[8] “Statement by the Spokesperson on the Parliamentary elections in Armenia, ” accessed 10 April 2017,  https://eeas.europa.eu/headquarters/headquarters-homepage_en/24071/Statement%20by%20the%20Spokesperson%20on%20the%20Parliamentary%20elections%20in%20Armenia