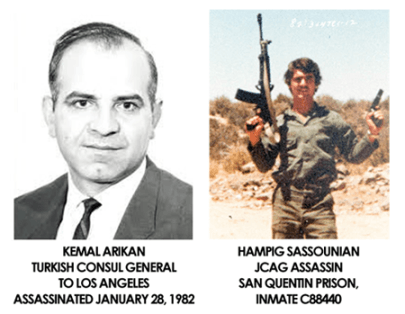 On 14 December 2016, the Armenian American terrorist Hampig (Harry) Sassounian, who assassinated the Consul-General of Turkey in Los Angeles, Kemal Arıkan, on 28 January 1982, was granted parole as a result of his parole hearing. This decision is subject to the approval of the Governor of California and will be open to appeal.

As it is known, Hampig Sassounian was convicted for murder of Arıkan because of his nationality and was sentenced to life imprisonment. Since it was established that Arıkan was murdered due to his national origin, Sassounian was not eligible for parole. However, 20 years later, in 2002, Sassounian was made eligible for parole by way of the removal of the special provision regarding murder based on national origin on the grounds that he apologized for the murder, although it was very clear that he killed Arıkan simply because he was a Turkish national and has shown no remorse for it.[1] Following this decision, Sassounian’s previous parole requests were rejected by the California Department of Corrections Parole Board in 2006, 2010, 2013 and 2015. However, ultimately, he was granted parole after a parole hearing held on 14 December 2016.[2]

Kemal Arıkan’s murder was one in a chain of the Armenian terror campaign which began in 27 January 1973 with the assassinations of Mehmet Baydar, the Turkish Consul-General in Los Angeles and his Deputy, Bahadir Demir, in Santa Barbara, California, targeting Turkish diplomats and other officials in the 1970s and 1980s. This terror campaign was led by two terrorist organizations: ASALA (Armenian Secret Army for the Liberation of Armenia) and JCAG-ARA (Justice Commandos for the Armenian Genocide-Armenian Revolutionary Army). Hampig Sassounian was a member of JCAG-ARA. This is a terrorist organization affiliated with Dashnaksutyun (Armenian Revolutionary Federation) which perpetrated numerous bloody attacks in Eastern Anatolia and actually has seats currently in the Armenian Parliament.

Dashnaksutyun and the mentality it represents is effective in California, where most of the Armenian Americans in the U.S. live. The latest manifestation of this mentality that is hateful and intolerant against Turks and anything about Turkey was the recent raid of the lectures with Prof. George W. Gawrych, the author of Young Atatürk: From Ottoman Soldier to Statesman of Turkey, in California State University Northridge ve Chapman University by the youth organization of the Dashnak Party, leading to the cancellation of these lectures. It was this mentality that lead to the bombing of the house of Prof. Stanford Shaw, who was teaching at UCLA (University of California Los Angeles), and therefore, that lead him leave America in 1977. The cancellation of the lecture with Ambassador (R) Gündüz Aktan and AVİM Honorary President Ömer Engin Lütem in the University of Southern California in 2006 due to pressure from Armenians is also a result of this mindset.[3] The previous murders of Mehmet Baydar and Bahadır Demir in 1973 again by an Armenian American was again mentality put into action.

As it can be seen, militant Armenian circles in California are able to prevent anything they perceive is against their “cause”. They feel they are above the law in this regard. These militants, who see Sassounian as a “hero” and are prone to violence, will certainly feel untouchable after the release of the murderer of Arıkan, and will possibly see terrorism as a legitimate tool for their “cause” once again.

The decision with regard to Sassounian’s parole is open to be reversed by the Governor of California. However, to make such a decision in a California, in which Armenians have much influence, requires courage and morality. Considering the fact that Governor Brown was heavily endorsed during his election process by the Dashnak affiliate ANCA (Armenian National Committee of America) and other Armenian American organizations[4] and that he approved an act in 2014 about the inclusion of the Armenian genocide allegations into school curricula in California,[5] the difficulty of such decision becomes more apparent.

In this period marked by the rise of global terrorism, the release of the terrorist Sassounian will inevitably add a new problem to the already strained Turkish-American relations, will harm the spirit of the fight against terrorism and will cause disappointment and indignation among the Turkish people. It would certainly be prudent for the American authorities to reverse this parole decision of a terrorist which otherwise is bound to have undesirable consequences.