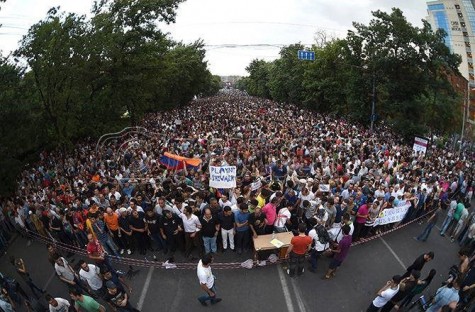 Armenia, the Caucasus nation of 3.2 million, has had hard days since June 17 due to the unrest against the raising of electricity prices. Thousands of protesters take to the streets in the on-going protests.

The country has been affected by the economic downturn of Russia, which Armenia has very close ties with. The electricity distribution company of Armenia, the Electric Networks of Armenia (ENA), is a subsidiary of Russia’s state-owned energy holding company Inter RAO. According to some estimates, the company’s debt is 250 million dollars.[1] Due to a sharp devaluation of the national currency, the dram, on May 8, the ENA asked the government to raise electricity tariffs by 40.8 per cent. The state regulatory commission, instead, approved raising tariffs but only by 16.7 per cent starting in August 1.[2] This raise would negatively affect the Armenians living in the country, whose Gross Domestic Product (GPD) per capita equals to 2,996.450 U.S. Dollars, according to the IMF.[3]

However, this decision raised tension in the country. Using the slogan “No to Plunder” (arm. Voch Talanin), the protesters popularised their protest on Twitter using the hashtag #ElectricYerevan. It was also said on the Facebook page of the protesters that “We are masters of our country, we will not allow electricity price hikes, we will not let our people be robbed.”[4] On June 17, first, a relatively small group gathered in the center of Yerevan, but the number eventually reached to thousands, with a peak of 15,000. On June 23, it is reported that police used water cannon, and beat protesters, including journalists. Nearly 230 people were detained as well. Since June 22, the protesters have been blocked the capital’s main avenue.

The use of force by police raised criticism from the Embassy of the United States of America, the European Union (EU), and the Organization for Security and Cooperation in Europe (OSCE). The EU and the OSCE expressed concern over police violence. Michael Link, the director of the OSCE Office for Democratic Institutions and Human Rights, said "As all OSCE member-states, Armenia has committed to protect and promote the fundamental freedom of peaceful assembly. At present, it must fully respect the rights of protesters in Yerevan. The information on the use of water cannons and detention of hundreds of demonstrators causes serious concern.”[5] The released statement of the Embassy of the USA can be read as the following:

“...Freedom of speech and assembly are fundamental rights in any democracy, and we were pleased to see both sides work in a manner that respected these rights and did not escalate tensions.

However, we are concerned about reports of excessive police use of force to disperse the crowd on the morning of June 23, as well as several reports of abuse while in police custody.  In addition, we are troubled by reports that journalists and their equipment were specifically targeted during the operation.  It is imperative that the Government conduct a full and transparent investigation of reports of the excessive use of force by the police to the full extent of Armenian law.”[6]

The Prime Minister of Armenia Hovik Abrahamyan “accused protesters of violating the country’s constitution and vowed to push ahead with the controversial 17 per cent electricity price hike, despite a days-long stand-off between protesters and police that has raised fears of a serious political crisis in the impoverished former Soviet country.”[7]

Russia’s press secretary stated that the Kremlin is watching what is going on in Armenia very closely. Musa Mikaelyan, a commentator on the news site 1in.am mentioned that: “the very fact that the Russian presidential press secretary commented on the events in Yerevan is evidence that either Russia is taking part in the events unfolding in Yerevan, or it is very worried and trying to take part, or is expressing readiness to participate if events get out of control.”[8] According to Oliphant, “some Russian politicians accuse Western governments of organising protests as part of Western plot to drag former Soviet states out of Russia’s orbit.”[9] However, independent analyst Stepan Safarian said to APF that "Protesters have no links to any political forces whatsoever. This is a purely social rebellion."[10] Some analysts also say that “the protests are partly fuelled by anger over years of alleged corruption and unaccountability within the Armenian government, and big business monopolised by Russian oligarchs with ties to the Kremlin.”[11] What brings the people out into the streets, according to Richard Giragosian, director of Yerevan-based think tank Regional Studies Center, is “the economic crisis and the underlying sense of economic hopelessness and lack of opportunity.”[12] He also added that “the government is attracting criticism because it’s seen as too weak as an interlocutor with Russia, whether it’s joining the Eurasian Union, or damaging its association agreement with the EU.”[13]

Many Ukrainians, as well as Bloomberg View columnist Leonid Bershidsky, see that there are similarities between the uprising in Ukraine and in Armenia. Bershidsky is in the opinion that these similarities worry Moscow. He stressed that the Ukrainian uprising, too, started in the same way: “with quiet grumbling, small rallies and singalong. Then police used excessive force, and the protests escalated so that, in less than two months, downtown Kiev was burning...”[14]

The images of some protesters waving European Union flags can be understood as stance against the pro-Russian policies of the government. On October, 2013, President Serzh Sargsyan mentioned that Armenia will have close relations with the EU and expressed that Armenia is ready to sign a modified version of the Association Agreement with the EU at the Eastern Partnership summit, in November 2013.[15] However, in January 1, 2015 Armenia became a member of the Russian-led Eurasian Economic Union. Having a Russian military base in Gyumri, Armenia still has close relation with Russia. In January 12, 2015 a Russian soldier from the Russian 102nd Military Base was accused of killing seven members of a local Armenian family in Gyumri. The incident has raised tension between Russia and Armenia, and caused huge protests. The mass killings have caused a wave of anti-Russian sentiment among some residents.[16] On June 27, 2015 it was announced that the Russian suspect will be tried in Armenia.

On June 27, the President of Armenia, Serzh Sargsyan has suspended as increase in electricity prices and said that the government would cover the cost pending a review. United Press International claimed that “The government's move comes as Russia agreed to loan Armenia $200 million for military upgrades.”[17] Nevertheless, the demonstrators did not disperse. They demanded the government to completely annul the rate hikes.

Since protests are still on-going, developments will continue to emerge.