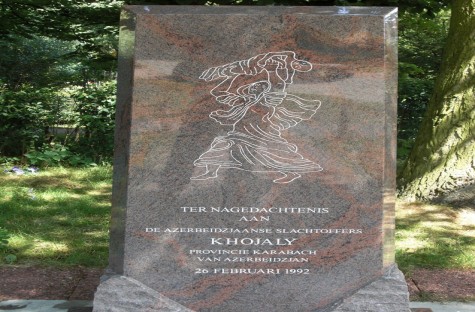 23rd ANNIVERSARY OF THE KHOJALY MASSACRE

Photo: The Khojaly Massacre Memorial in The Hague, Netherlands

Since 1923, Nagorno-Karabakh had been an Autonomous Oblast of Azerbaijan SSR with Armenian majority and Azerbaijani minority. After 1991, the region has been a part of the Republic of Azerbaijan. Although belonging to Azerbaijan, Armenia claims ownership of the territory that is of strategic importance due its location. In the late 1980’s, the movements of ‘glasnost’ (openness) and ‘perestroika’ (uncountable) convinced Armenians to demonstrate for the unification of Karabakh with Armenia. In 1987, Karabakh Azerbaijanis were systematically displaced by Armenians. In 1988, Armenia carried out some negotiations with Moscow for the incorporation of Karabakh into Armenia. The Council of Upper Karabakh, consisting of an Armenian majority, voted for the unification of Karabakh after the rapidly emerging protests in Armenia. However, the government of the Union of Soviet Socialist Republics (USSR) rejected the Armenian demands.

After the collapse of the USSR, the Karabakh conflict intensified between the newly-independent countries of Azerbaijan and Armenia. On November, 1991, Azerbaijan abolished the status of Nagorno-Karabakh Autonomous Oblast, bringing the territory under direct control of Azerbaijan. This decision was not accepted by the Armenians and on January 6, 1992, the Council of Upper Karabakh declared independence from Azerbaijan. This declaration transformed the conflict into war.  The conflict caused thousands of causalities on both sides.

Karabakh was connected to Armenia via Khojaly. Having the only airport in the region boosted the significance of the city. On the night of February 25, 1992, Armenian soldiers with backing of the Russian army units captured the city and massacred the unarmed Azerbaijani people and the soldiers.

According to the official data, 613 civilians were massacred including 106 women, 63 children and 70 elderly people; 487 people including 76 children were injured, 1.275 people were taken hostage and were tortured. 150 Azerbaijan Turks who were taken hostage are still missing. According to the unofficial data, 1.300 Azeri Turks were massacred and more than 1.000 people were injured. Due to the massacre, 25 children were left orphaned.[1] The Human Rights Watch report defined the Khojaly Massacre as ‘the largest massacre to date in the conflict’.[2] At the end of 1993, the city of Shusha with an Azerbaijani majority and Kelbajar districts were captured by Nagorno-Karabakh which is still under the occupation by Armenians.

The involvement of Russia and Turkey brought the Karabakh question to the international agenda. In 1992, the OSCE Minsk Group was created by the Organization for Security and Co-operation in Europe (OSCE) for a peaceful resolution of the problem. The group, including Turkey, continues its activities without any solution to date.

The response of the current President of Armenia, Serzh Sargsyan, who served in the Armenians forces in the Khojaly massacre, to the researcher, Thomas De Waal is notorious: “The Azerbaijanis thought that they were joking with us, they thought that the Armenians were people who could not raise their hand against the civilian population. We were able to break that [stereotype]. And that’s what happened. And we should also take into account that amongst those boys were people who had fled from Baku and Sumgayit. Yes, it’s true that there were civilians in Khojaly. And when a shell flies through the air, it doesn’t distinguish between civilian and soldier, it has no eyes. There was a certain amount of ethnic cleansing. It's not possible otherwise. But we didn't think up this method. They thought this up when, with the help of their militia, they kicked our people out of the Hadrut and Shusha region[3]” Thereby, Sargsyan remarked about the purposeful murder of civilians and thereby acknowledged the ethnic cleansing of Azerbaijanis. This is one of the acts, according to Article 2 of the Convention on the Prevention and Punishment of the Crime of Genocide, signed by United Nations, which is ‘committed with intent to destroy, in whole or in part, a national, ethnical, racial or religious groups’.[4] Armenia claims that the 1915 events constitute genocide, but does not accept the ethnic cleansing that technically constitutes genocide against Azerbaijanis. As such, contrary to its current president's statements, Armenia is thereby contradicting itself.

The United Nations (UN) acknowledged the occupation of the Azerbaijan territory by Armenians. “After the occupation and displacement of Azerbaijanis, four UN Security Council Resolutions have been passed. The first one (No. 822) dates April 30, 1993. It called for the cessation of armed hostilities and withdrawal of local occupying forces troops from Kelbajar and other occupied districts. UN Security Council resolution 853 refers to the resolution 822, and called on withdrawal of local Armenian troops from Agdam district and other occupied districts of Azerbaijan.  The resolutions 874, adopted on 14 October 1993, called upon the parties to observe the ceasefire, and resolution 884, adopted on 12 November 1993, also referred to the first two resolution, condemned the occupation of Azerbaijan territories by Armenians and demanded an immediate cessation of armed hostilities. Besides, considering the influence of Armenia over the Upper Karabakh Armenians, The UN Security Council demanded for implementation of the resolutions.”[5]