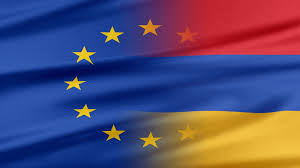 The legal basis for the European Union (EU)-Armenia bilateral relations fundamentally rests on the Partnership and Cooperation Agreement that was ratified in 1999. It provides a platform for wide-ranging cooperation in the areas of political dialogue, trade, investment, economy, law-making, and culture. The said agreement was signed and ratified at the end of the 20th century and served as a basis for the relations up until the beginning of 21st century. However, increased relations and changes in regional situation have made the Partnership and Cooperation Agreement outdated and Armenia was included (as a Southern Caucasus country) in the European Neighborhood Policy (ENP),[1] which encourages closer ties between ENP countries (including Armenia) and the EU.[2]

In this framework, an ENP Action Plan for Armenia was published on 2 March 2005. The key objectives for the Action Plan identified, among others, are strengthening the rule of law, of democratic structures and pluralism; holding democratic elections; constitutional reform; reform of local self-government; strengthening respect for human rights and fundamental freedoms; improvements in the business environment; tackling corruption and fraud; reform of tax and customs administrations and legislation and lastly as progress towards conflict resolution and enhanced regional cooperation. The EU-Armenia ENP Action Plan was adopted in November 2006 for a period of five years [3]. Armenia was then included in the EU’s Eastern Partnership in 2009, which is a specific dimension of the ENP and aims at building a common area of shared democracy, prosperity, stability, and increased cooperation. [4]

Negotiations on EU-Armenia Association Agreement started in July 2010. The Deep and Comprehensive Free Trade Area Agreement between the EU and Armenia was also started in June 2012. The negotiations concluded successfully in July 2013. However, the agreement was not signed an President of Armenia Serzh Sargsyan withdrew from the EU association process at the last minute and announced the intention of Armenia becoming member of the Eurasian Economic Union spearheaded by Russia.[5]

Following Armenia’s decision in September 2013 not to sign the negotiated Association Agreement, including a Deep and Comprehensive Free Trade Area with the EU and Armenia's subsequent entry into the Eurasian Economic Union in January 2015, Armenia and the EU nevertheless continued their political and trade dialogue to find a way forward for future cooperation. Negotiations on a new framework agreement were launched in December 2015, resulting in the signing of the Comprehensive and Enhanced Partnership Agreement (CEPA) on the margins of the Eastern Partnership Summit held in Brussels on 24 November 2017. The CEPA is considered as a modern, comprehensive, and ambitious agreement, which deepens the Parties' relations in political, sectorial, and trade areas of mutual interest.[6]

The EU-Armenia Partnership Priorities were signed in February 2018. The said priorities “aim to facilitate the implementation of the cooperation between the partners, including in the context of the new agreement” and “seek to strengthen the relationship between the EU and Armenia and pursue the promotion of universal values and stability, resilience, security and prosperity built on democracy, human rights, rule of law and sustainable economic growth and openness.”[7]  In fact, these priorities reflect the priorities adopted at the Eastern Partnership Summit of 24 November 2017 held in Brussels. In this regard, the Declaration adopted at the said Summit reconfirmed the clear commitment by both the EU and the six partner countries to the Eastern Partnership and highlighted the importance of shared values and implementation of the reform agenda, based on the results it delivers across four priority areas: (1) economic development and market opportunities; (2) strengthening institutions and good governance; (3) connectivity, energy efficiency, environment and climate change; and (4) mobility and people-to-people contacts.[8]

The Comprehensive and Enhanced Partnership Agreement entered into provisional application on 1 June 2018 and the the first meeting of the Partnership Council under the Agreement was held on 21 June 2018. The Council is the highest body established under the CEPA to supervise the implementation of the Agreement and to discuss issues of mutual interest. The Council was chaired by the High Representative of the European Union for Foreign Affairs and Security Policy, Federica Mogherini and Foreign Minister Zohrab Mnatsakanyan led the Armenian delegation. According to Joint Press Statement, [9] Armenia and the EU expressed their willingness to expand and deepen cooperation within the framework of this “new legal basis” and the Eastern Partnership, and the reviewed European Neighbourhood Policy. [10]

In this framework, the Partnership Council welcomed the peaceful nature of the recent protests in Armenia, which led to a democratic change of government in accordance with the Constitutional framework. The EU praised the general restraint exercised by all sides and called for continued, inclusive dialogue among all political stakeholders, including civil society. The EU welcomed the Armenian government's expressed commitment to fight against corruption and actions the Armenian government so far took in this field. The EU reconfirmed its support, including technical and financial assistance, for reforms to enhance democracy, rule of law and respect of human rights, as well as to increase prosperity and socioeconomic resilience in Armenia.

The Partnership Council highlighted the importance of amending Armenia's electoral code in line with OSCE ODIHR recommendations to build confidence in the electoral process. The EU expressed its readiness to assist Armenia with the organization and monitoring of new elections. The Partnership Council also stressed that an effective and independent judicial system is essential for the rule of law and an important precondition for economic and social development; indicated the need for swift progress with the development of a new Criminal Code and a new Criminal Procedural Code, and stressed the importance of comprehensive anti-discrimination legislation.

In addition, the Partnership Council underlined the need to build further on the CEPA provisions in the field of trade through sustained efforts in order to secure a stable, business-friendly and predictable trading environment in Armenia, including full and timely implementation of the provisions on the protection of geographical indications. The Partnership Council also underlined the importance of good governance in the field of taxation with respect to the Code of Conduct on Business Taxation.

On energy, the Partnership Council underlined the importance of energy security, energy efficiency, renewables and nuclear safety in line with the CEPA and with the EU-Armenia Partnership Priorities signed on 21 February 2018. On transport, the Partnership Council looked forward to the signature of the EU-Armenia Comprehensive Air Transport Agreement, initialed on 24 November 2017, which will improve market access and contribute to the highest safety, and environmental and social standards. Furthermore, Armenia expressed its willingness to start a Visa Liberalization Dialogue if all benchmarks are met.

The Partnership Council recalled that the EU-Armenia Partnership Priorities will shape the EU assistance priorities for Armenia. More than 160 million is euros are earmarked for the years 2017-2021. The Partnership Council stressed the need to make the best use of these resources, with a view to supporting the implementation of the CEPA and improving the living conditions of the citizens in a visible and tangible manner.

It is noteworthy that “the EU reiterated its support to the OSCE Minsk Group Co-chairs' efforts aimed at finding a peaceful solution to the Nagorno-Karabakh conflict.” It should be also underlined that “the EU reiterated its commitment to support the normalization of relations between Armenia and Turkey and encouraged both sides to engage in this process without any preconditions.”

As it is mentioned in some comments, the Comprehensive and Enhanced Partnership Agreement between the EU and Armenia “is not likely to change the geopolitical balance in the South Caucasus or to change Armenia’s foreign policy.”[11] Although it constitutes and is presented as a “new legal basis” for the relations between Armenia and the EU, in political reality the agreement represents not much more than the regular and mostly ineffective EU activity in the nearby regions.

[1] The ENP governs the EU's relations with 16 of the EU's closest Eastern and Southern Neighbors. To the South: Algeria, Egypt, Israel, Jordan, Lebanon, Libya, Morocco, Palestine, Syria  and Tunisia and to the East: Armenia, Azerbaijan, Belarus, Georgia, Moldova and Ukraine. Russia.

[4] The Eastern Partnership (EaP) is a joint initiative involving the EU, its Member States and six Eastern European Partners: Armenia, Azerbaijan, Belarus, Georgia, the Republic of Moldova and Ukraine.

[6] “Report on EU Armenia Relations in the Framework of the Revised ENP” (HIGH REPRESENTATIVE OF THE UNION FOR FOREIGN AFFAIRS AND SECURITY POLICY, April 4, 2018), SWD(2018) 330 final, https://eeas.europa.eu/sites/eeas/files/report_on_eu-armenia_relations_in_the_framework_of_the_revised_enp.pdf.

[10] On 18 November 2015, the European Commission and the High Representative for Foreign Affairs and Security Policy presented the main lines of the review of the ENP. In the reviewed ENP the EU focuses on areas that matter most. The stabilization of the region, in political, economic, and security related terms, will be at the heart of the new policy. The EU's own stability is built on democracy, human rights and the rule of law and we will continue to make the case for these universal values.