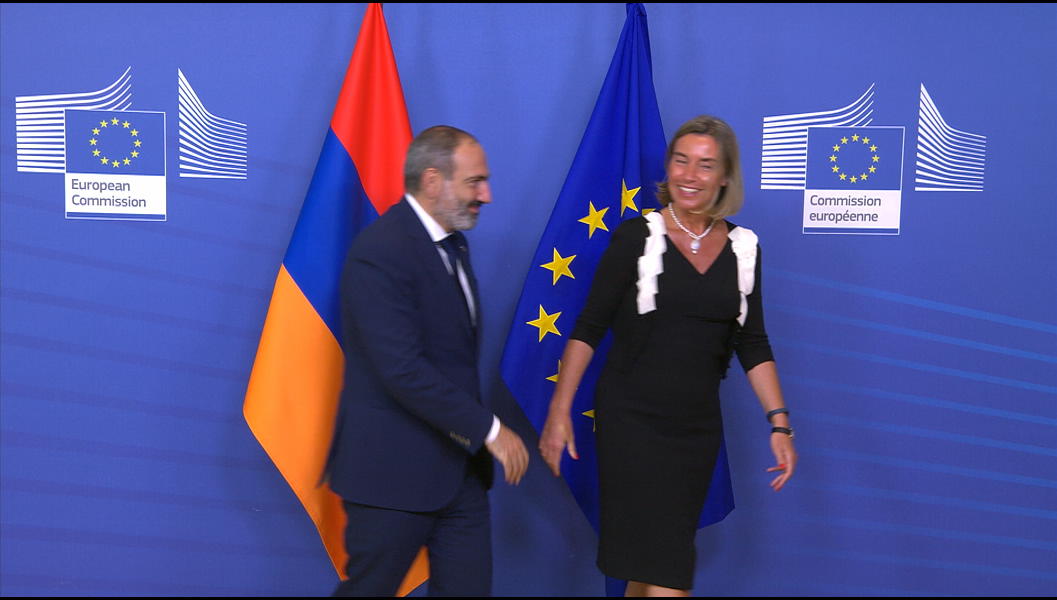 According to the Armenian press, Armenian Prime Minister Nikol Pashinian, during his two-day visit to Brussels on 11-13 July on the occasion of participating in the NATO Summit, also met with the two top European Union officials. He reportedly held separate talks with President of the European Council Donald Tusk and the President of the European Commission Jean-Claude Juncker in the margins of the NATO Summit. [1]

Pursuant to information provided by the Armenian Prime Minister’s press office, both of the EU officials praised the recent democratic change in Armenia’s government. Tusk is quoted to have said that “what happened in Armenia was special and, I would say, very European” regarding the mass protests that brought Pashinian to power in May of this year. Tusk is claimed to have said that “your example is very promising and you can count on EU assistance in implementing reforms.” The same news report asserts that “Pashinian assured Tusk and Juncker that his cabinet is committed to democratizing Armenia’s political system, strengthening the rule of law and combatting corruption.”[2]

Pashinian also met with the High Representative for Foreign Affairs and Security Policy/Vice-President of the European Commission Federica Mogherini in Brussels on 11 July. According to the European External Action Service;

“The two discussed the new Armenian government's clear commitment to reform and the concrete action already taken to this end. […] Mogherini confirmed that the European Union stands ready to provide concrete support to reforms, including through technical and financial assistance, and highlighted the fight against corruption and judicial reform as areas of particular importance. The High Representative also stressed the EU's readiness to provide assistance for the organization and monitoring of the next elections, to be held in line with OSCE/ODIHR recommendations.”[3]

Mogherini also “confirmed her and the European Union's strong support for the peaceful settlement of the Nagorno-Karabakh conflict” and said that “it is vital that the sides engage fully in negotiations without preconditions, under the auspices of the Minsk Group Co-Chairs.”

However, while speaking to reporters at the end of his visit to Brussels, Pashinian reportedly complained that “the EU has still not promised extra aid to his government.” He said that he expressed his” bewilderment” at this fact in his first talks with EU leaders. The “bewilderment” of Pashinian, as reported by the press, was met with a response by the Head of the EU Delegation in Yerevan Piotr Switalski. He rightfully and realistically stated that;

“… the European Union needs to hear ‘very concrete ideas’ from the new Armenian government before it can consider increasing economic assistance, […] the [Armenian] government has yet to come up with a set of specific reform-oriented projects requiring EU funding. We would like to hear from the Armenian government concrete ideas. In what form, in what way can the European Union be helpful? In some ministries we have already received some preliminary ideas. We would like to have a comprehensive view. And when we have this view we will discuss how we can help.”[4]

It should be mentioned at this point that the EU has pledged to provide up to 160 million euros of aid money to Armenia for the period of 2017-2021 in line with the Comprehensive and Enhanced Partnership Agreement (CEPA) between the EU and Armenia. CEPA was signed on the margins of the Eastern Partnership Summit held in Brussels on 24 November 2017 and entered into provisional application on 1 June 2018. The first meeting of the Partnership Council under the Agreement was held on 21 June 2018.[5]

The cooperation and aid framework between the EU and Armenia has thus already been established. However, as evident from the statements of EU officials, it is not enough for the Armenian Prime Minister Pashinian to boast that the previous corrupt and unconstructive Armenian government has been replaced with a new one, nor is it enough to simply proclaim that bright days are ahead for Armenia. It is obvious that the EU is in definite need of hearing from the Armenian government concrete ideas about how the EU and Armenia should proceed together and that the that Armenian government has yet to come up with specific reform-oriented projects requiring EU funding.

It should be also kept in mind that the EU has recently adopted a “merit-based” approach for the new prospective EU members.[6] In the context of the new EU reform discussions, this approach should be deemed valid for all other EU engagements. The “merit-based” approach brings objective criteria for further engagements and creates competition between prospective EU members that all are looking to demonstrate that they are the most deserving of EU economic assistance. In the light of the foregoing, it is possible to state that Armenia, at this point of time, lacks the merits for increased EU economic assistance because it has put forth more words than deeds.

[6] “Communication From The Commission To The European Parliament, The Council, The European Economic And Social Committee And The Committee Of The Regions . A Credible Enlargement Perspective for and Enhanced EU Engagement with the Western Balkans” (European Commission, June 2, 2018), COM(2018) 65 final. P. 2., https://ec.europa.eu/commission/sites/beta-political/files/communication-credible-enlargement-perspective-western-balkans_en.pdf.