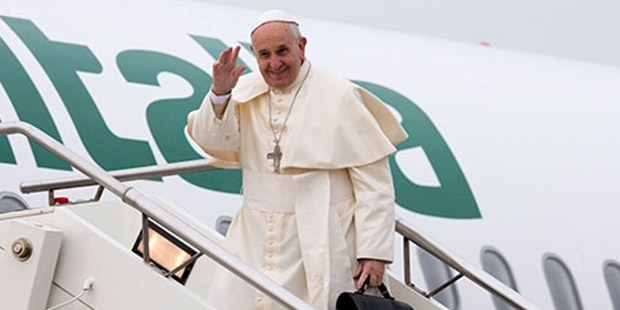 Pope Francis, the spiritual leader of the Roman Catholic Church and the head of state of Vatican City, will make an official visit to Azerbaijan on October 2. This will be the last leg of Pope Francis’ Caucasus region visit. This visit is important for multiple reasons.

There are key issues that Azerbaijanis and others will closely look at during Pope's visit to Azerbaijan. During his visit to Armenia back in June, Pope Francis had brought up the controversial allegations.  During a speech delivered in Armenia, he approached the Armenian revolt during First World War in a one-sided manner and referred to the 1915 events as an “Armenian genocide”. By doing this, not only did he distort historical facts, he also disregarded the atrocities committed against Ottoman Muslims by Armenian revolutionary committees and gangs that operated within the Ottoman Empire before, during, and after 1915.

Firstly, Azerbaijanis will monitor Pope Francis’s visit to see if this omission of historical suffering of Muslim people at the hands Christian people will become a pattern and lead Pope Francis’ to make careless remarks about issues that are of importance to Azerbaijanis. For example, Azerbaijanis will look to see if the Pope mentions the Khojaly Massacre committed by Armenian groups during the Karabakh War. They will further observe if Pope Francis will make a call to Armenians (in Armenia) to come to terms with the crimes their fellow Armenians had committed against Azerbaijanis.

Pope Francis not only mentioned the Nagorno-Karabakh occupation only in passing, he also ensured Armenians (in Armenia) that he would talk to Azerbaijanis about why they should make peace despite the fact that a portion of Azerbaijani homeland is under occupation. In his return from Armenia trip, he stated that,

I will speak to the Azerbaijanis about the truth, of what I have seen, of what I feel. I will encourage them too. I have met the President of Azerbaijan and have spoken with him. I will also say that not making peace on account of a small patch of land – because that is all it is – means something grim . . . But I say this to all, Armenians and Azerbaijanis. Perhaps you aren’t agreed on the modalities of peacemaking, and this you have to work on.[2]

Azerbaijanis will expect him to explain how the expulsion and the ensuing suffering of millions of Azerbaijanis from their homes can be simply explained away as a conflict over “a small patch of land”.

Perhaps it would be in the best interest of Pope Francis, and certainly in the best interest for the continued development of Vatican foreign policy, if he increases the time he will spend in Azerbaijan. It is unfortunate that his visit to Azerbaijan is the shortest among the visits he has made or planned in the Caucasus region. His visit to Azerbaijan will not even last for 12 hours, whereas he had allocated three days for his visit to Armenia.[3] It is also unfortunate that has chosen to simply meet with only key figures in Azerbaijan such as the President İlham Aliyev and Haji Allahshükür Hummat Pashazade, Sheikh ul-Islam, Grand Mufti and chairman of the Religious Council of the Caucasus. Yet it would have been considerate if he had planned a meeting with the ordinary people of Azerbaijan as well. Would such an action not send the Muslims of Azerbaijan and rest of the Muslims in the world a message that he actually truly cared about the Muslim-Catholic relations?

The Holly See Press Office had announced that the motto for the visit to Azerbaijan will be, "We are all brothers". The Press Office stated that the inspiration for the motto came from the words written in the Gospel of Matthew and the overall teachings of the Roman Catholic Church which state “that all men are part of a single family were called to the fraternity and friendship.”[4] Wouldn’t a more comprehensive visit to Azerbaijan truly show the Pope’s firm belief of these Roman Catholic Church values, whether one is a Muslim or a Christian?

[2] “Pope in Georgia and Azerbaijan for the second part of his visit to the Caucasus,  Asianews.it, http://www.asianews.it/news-en/Pope-in-Georgia-and-Azerbaijan-for-the-second-part-of-his-visit-to-the-Caucasus-38010.html