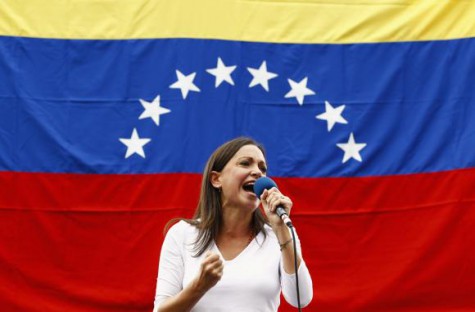 Venezuela's Congress on Tuesday requested a criminal investigation of opposition deputy Maria Corina Machado for crimes including treason in relation to her involvement in anti-government protests that have left dozens dead.


Machado, a 46-year-old engineer, has been one of the most visible leaders in six weeks of opposition demonstrations against socialist President Nicolas Maduro that have unleashed the country's worst unrest in a decade.


Ruling Socialist Party legislators, who hold a majority of the seats, voted to ask the state prosecutor to investigate Machado for offenses that range from damaging buildings to inciting civil war.


"We will not permit impunity. We will ensure revenge for those deaths. We will ensure these deaths will be paid for," said legislator Tania Diaz of the ruling Socialist Party. "Anyone who violates the right to life is violating the constitution."


The move comes a month after the arrest of opposition leader Leopoldo Lopez, who along with Machado launched a national movement at the start of the year under the banner "The Exit" that is meant to help end 15 years of socialist rule.


Tuesday's theatrical session included a slick video of Machado's anti-government activism of the last decade that highlighted her links to the United States, the Venezuelan government's ideological adversary.


"I'm convinced that this attack against me is the product of a regime that's terrified by an unprecedented citizens' movement," Machado said in a defiant press conference on Tuesday night, vowing the opposition would keep up protests.


She cannot be tried without approval from both the state prosecutor and the Supreme Court, and another assembly vote as to whether she should be stripped of her parliamentary immunity, according to a constitutional lawyer consulted by Reuters.


Decisions by the courts and the state prosecutors' office have frequently been in line with the Socialist Party, meaning the process could take place quickly.


Machado helped turned sporadic student demonstrations in the western Andes region that began in January into a nationwide protest movement that has included both peaceful marches and violent melees between hooded youths and anti-riot troops.


She has urged demonstrators to stay in the streets to protest inflation of 57 percent, chronic product shortages and one of the world's highest rates of violent crime.


Machado, elected to Congress in 2010, is frequently pilloried by Chavez supporters as an out-of-touch elitist whose wealthy background makes her incapable of relating to the poor.


Despite her high profile during the protests, many Maduro opponents criticize her as shrill and overly confrontational.


She rose to prominence in 2003 through an organization that helped the opposition gather signatures for what would ultimately be a failed recall referendum in 2004 against the late socialist leader Hugo Chavez.


That group received financing from the United States, in what Chavez call Washington's meddling in the country's affairs.


In one well-known exchange with Chavez in Congress, Machado called on him to halt state takeovers of private businesses, coining the phrase "to expropriate is to steal."


Chavez refused to enter into a debate, dismissing her by saying "an eagle doesn't hunt a fly."


Government critics point out that she signed a 2002 decree that dissolved state institutions during the de facto government that ruled for less than two days during Chavez's ouster.


She won less than 5 percent of the vote in the 2012 opposition primaries to choose a candidate who would face down Chavez in that year's election. Chavez died of cancer a year ago.