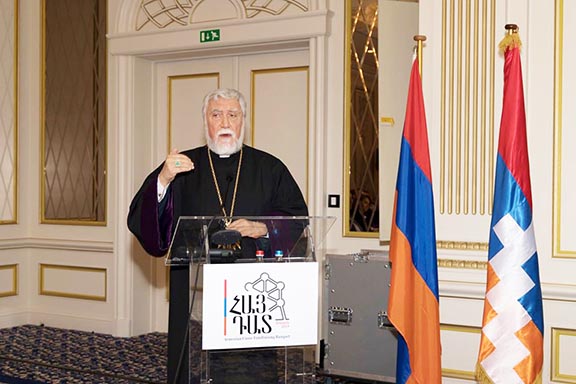 On 9 November 2019, a development that would put the Turkish-Armenian reconciliation in a difficult position took place in Brussels. According to the Asbarez’s news report dated 15th November and titled as “$2.4 Million Raised by ARF Bureau for Advancement of Armenian Cause, an event was organized by the Armenian Revolutionary Federation Bureau on November 9 in Brussels. Among those attending the event were “President of Artsakh/Nagorno Karabakh Republic”, who is “representative” of the illegal separatist regime of the autonomous region within the territorial integrity of Azerbaijan, Armenian’s Ambassador to the Kingdom of Belgium, Armenia’s permanent representative to NATO, the permanent representative of the so called “Artsakh Republic” in Brussels and the Patriarchs of the Armenian Churches in Great Britain and Ireland. Among those attending the event, the most prominent name was Aram I., the spiritual leader of the Armenian Catholicosate of Antelias. In his speech, Aram I highlighted the importance of pursuing the Armenian Cause and the imperative to maintain this effort in order to meet the demands of Armenian people. Afterwards, “The Armenian Cause is not solely the cause for the Diaspora or Armenia or Artsakh. It is the Cause for the entire Armenian Nation. For us the strengthening of Armenia is a fight. The preservation of Artsakh’s independence is a fight. We are a people that has demands and for us the strengthening Armenia’s independence is an utmost priority,” added to his speech, and said that the pursuing of the Armenian Cause is an everyday fight.[1] Assuming the participation of the Catholicos of Antelias, Aram I, one of the leading figures in the Armenian Diaspora, to the event organized by the Armenian Revolutionary Federation (ARF) known for its past supporting to radicalism and terrorism, as a radical political attempt to raise the issue of Armenia into the world public. At this point, it would be helpful to remind activities of Aram I in the past.

Despite the fact that French military authorities objected and Turkish authorities gave assurance, the Armenian Catholicosate of Cilicia, which was preexisting in the Kozan (Sis) district of Adana, had abandoned Kozan on its own record in 1921 and re-established in the town of Antelias near Beirut.[2] The Patriarchate, which had came under the influence of extreme ideas as a consequence of the activities in order to connect the Armenian diaspora and churches to this Patriarchate during the Cold War period, became one of the salient institution engaged itself in hostility towards Turks in a short period of time[3]. In April 2015, due to the request for the return of the immovable property, the Catholicosate’s application to the Constitutional Court was rejected on procedural grounds a year later. Then, upon the application, which was rejected because the administrative and judicial application ways were not exhausted prior to its application to the Constitutional Court, was brought to the European Court of Human Rights (ECHR).[4] Aram I, whose hostility towards Turkey and the Turks became apparently vivid during the judicial process, tried maintain pressure and guidance relevant to trial process in a court with international prestige.[5] Despite all the efforts of Aram I, the case was rejected because of the very same reason bearing the procedural grounds of non-exhaustion of domestic remedies offered by the Constitutional Court of Turkey. The Catholicos Aram I, directed his criticism to the ECHR on this decision, readily demonstrated his eagerness to create a negative atmosphere against Turkey by attempting to use the case as a political tool rather than a legal achievement at that time.[6]

It would be revealing at this point to remind Aram I, who is still continuing his activities against Turkey as in the past, does not only act on behalf of the Armenian Catholicosate of Antelias. In 1974, Aram I was one of the founding members of the Middle East Council of Churches, following that, he started to attend the Assemblies of the World Council of Churches (WCC).[7] After his election as a member of the Faith and Order Commission of the WCC in 1975, and as a member of the Standing Committee of the same Commission in 1983. Aram I’s position in the WCC has become increasingly important, and later he served as Moderator of the WCC for a long time. Taking into account all of these, it would not be a mistake to assert that not only on behalf of the Armenians Catholicosate of Antelias, but also on behalf of the WCC that Aram I acts as a spiritual leader as well.

Considering the duties to date of Aram I as a spiritual leader, it should be stated that both for the Armenian and the Christian societies he plays a significant role. Nevertheless, Aram I, the Catholicos of Antelias, a leader who comes to the forefront with his political and radical attitudes against Turkey. In this context, the fact that Aram I’s participation to the fundraising event, organized by the ARF on 9th October together with the politicians, who are separatists and charged with ethnic cleansing, reveals how religion was abused. On the other hand, the ARF is an entity which terrorize the members of Armenian Diaspora by its radical standing throughout history. Today the ARF’s stance is criticized within the Armenian community as well. Hence, this affiliation between the Catholicos of Antelias and the ARF under the fundraising event is immensely inappropriate. Such attempts in order to use religion as an instrument in politics do not help to advance the Turkish-Armenian relations.

[1] “$2.4 Million Raised by ARF Bureau for Advancement of Armenian Cause,” Asbarez, 15 October 2019, http://asbarez.com/188425/2-4-million-raised-by-arf-bureau-for-advancement-of-armenian-cause/?fbclid=IwAR2SqBBMzqioWLIyJHpNodpo4AEx96xCwbv4TK7Lt0UNDdRBVHgxsUWamqQ