THE TURBULENT POLITICAL CLIMATE AND THE PROTESTS TAKING PLACE IN THE STREETS OF TBILISI OVER THE 31 OCTOBER PARLIAMENTARY ELECTIONS
Commentary No : 2020 / 44
Ceyda ACİCBE
12.11.2020
5 min read 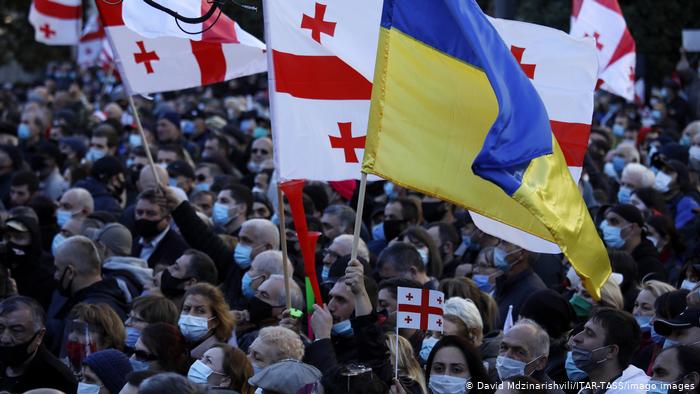 Following the 31 October parliamentary elections in Georgia, protestors took to the streets and rallied in Tbilisi to support opposition parties that have rejected the result of the elections, and demanded the resignation of the head of the Central Election Commission (CEC). The opposition parties and their supporters have reportedly also called for a fresh vote. On 8 November, hundreds of protestors gathered outside the CEC and Nika Melia, an opposition leader, stated that “Our fight will be till the end. We are not scared of anything”.[1] But what has caused this widespread outrage in Georgia?

It would be revealing to start with a retrospective glance of political events in Georgia. After many years, the ruling party, the Georgian Dream (GD), began to genuinely feel the power of the political opposition on 20 June 2019. That day, at the meeting of the Inter-Parliamentary Assembly of Orthodoxy (IAO), Sergei Gavrilov (a member of the Russian State Duma) sat in the chair of the speaker of the Georgian parliament and delivered a speech from there. To some, it was an indication of a lack of esteem towards furthering the pro-Western course of Georgia. To some, it was an obvious manifestation of adhering to the Russian policy of the current government. It seems that the change of the IAO’s agenda was approved by the leading figures of Georgian authorities, i.e. by the leaders of the GD.[2] Hence, the disillusionment and frustration with these events may have led people to come together and demonstrate in the way we have seen in the events.

In fact, the present-day tension can be traced back to the demonstrations of 20 June 2019. What the opposition was demanding at that time was for the use of proportional party lists in future elections. A few days later, Bidzina Ivanishvili, the leader of the GD, stated that the demands of the opposition would be fulfilled in the upcoming elections in 2020. This proposal, coming from the Ivanishvili, paved the way for the beginning of the negotiations with the opposition. However, contrary to what was agreed, most of the GD’s members did not accept switching to a proportional electoral system on 14 November 2019, during a vote for a constitutional amendment.[3] From that day onwards, demanding democratic reforms in the country, the opposition and its supporters began to hold peaceful protests.

The 31 October parliamentary elections using proportional lists would affect the election of 120 members of the parliament (with a total of 150-seats) and the remaining 30 in single-member majoritarian districts. In addition, the party that received less than 40.54 percent of the votes in the election could not form a government on its own. Political parties would now have to pass the 1 percent electoral threshold (instead of 5 percent) to enter the next parliament.[4] Most importantly, the low barrier of entry to the parliament meant that the future legislature would be the most factionally diverse so far in the last twenty-five years.[5] Now, the question regarding the 31 October parliamentary election was which of the 50 registered parties would be able to constitute a coalition government?

According to the October 31 vote, the GD won over 48 percent of the 95 percent of votes that have been counted as of the writing of this article. More than 50 percent of seats would have allowed the GD to form a government by itself. But the leaders of all eight opposition parties have accused the GD of stealing the election and signed an agreement indicating the refusal of their mandates. To opposition party leaders, to be a part of this parliament meant becoming part of the GD.[6] The next day, the leaders encouraged their supporters to begin demonstrations. Regarding the 31 October parliamentary elections, International Election Observation Mission (IEOM) stated that the elections “were competitive and, overall, fundamental freedoms were respected. Nevertheless, pervasive allegations of pressure on voters and blurring of the line between the ruling party and the state reduced public confidence in some aspects of the process”.[7] Meanwhile, the crowd on the streets of Tbilisi continued to increase incrementally.

A bigger demonstration was scheduled on November 8 by the opposition parties and their supporters. The plan was to gather at the center of Tbilisi. Indeed, tens of thousands of opposition supporters gathered at the center of the city, and a part of them gathered outside the CEC and called for a rerun of the 31 October parliamentary elections. However, this demonstration was met with harsh police intervention, leading to dozens of people getting injured. The opposition parties have called on Ivanishvili to dismiss the head of CEC and negotiations to begin on a fresh election.[8]

Whether the process will be moved to political and legal platforms is a question that is waiting for an answer. However, it seems that the opposition supporters continue to come out into the streets. In this case, perhaps the real question is whether the streets of Tbilisi will witness a crowd marching for a change in the government akin to what happened in the aftermath of the recent elections in Belarus and Kyrgyzstan?

[3] Giorgi Menabde, “A Year in Review: Georgia’s Security and Democratic Foundation Face Tests From Within and Outside,” Eurasia Daily Monitor 17, no. 5, https://jamestown.org/program/a-year-in-review-georgias-security-and-democratic-foundation-face-tests-from-within-and-outside/.

[5] Giorgi Menabde, “Are Georgians on the Verge of Electing Their Frist Coalition Government?,” Eurasia Daily Monitor 17, no. 150, https://jamestown.org/program/are-georgians-on-the-verge-of-electing-their-first-coalition-government/.