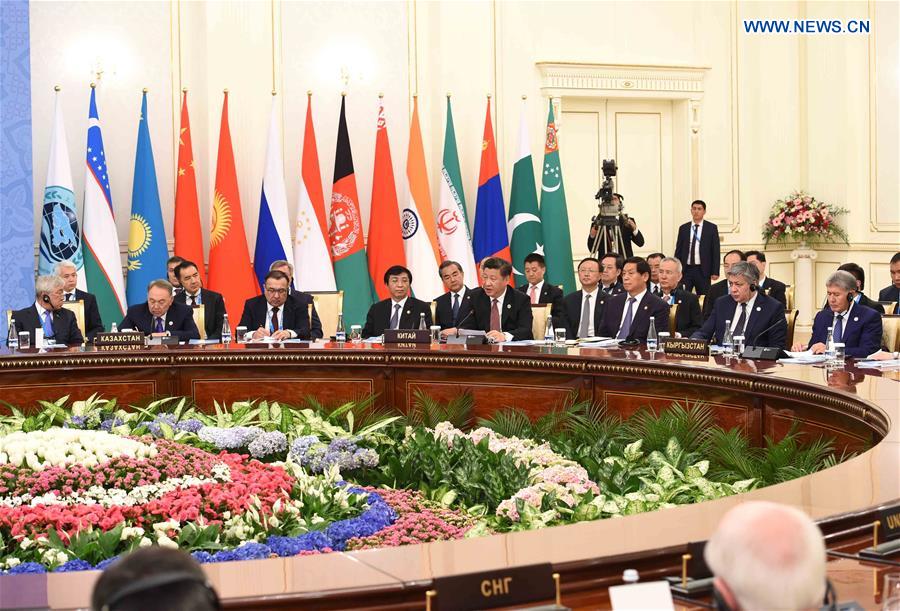 Shanghai Cooperation Organization summit took place in Tashkent, Uzbekistan between the dates June 23-24, 2016, under the chairmanship of Republic of Uzbekistan on the 15th year anniversary of the organization. One of the striking agenda items of the summit was India and Pakistan’s memberships to the SCO. The decision to start the membership process was taken at the Ufa Summit last year and this this decision was followed up with The Foreign Ministers of SCO member countries’ decision to submit the memorandum of obligations on the full memberships of India and Pakistan to the Council of Heads of State for consideration and signing between the dates 23-24 May 2016 at the Meeting of the Council of Foreign Ministers of SCO in Tashkent. Iran is expected to be the next member.

Commenting on these developments, Kazakh President Nursultan Nazarbayev stated:  “We will meet up next time at the SCO forum at which we will include India and Pakistan into the organization,” and added “Iran is the next. So, this organization with three billion residents is becoming a huge power," pointing out the increasing potential and capacity of SCO with the newcomers.[1] It is also believed that SCO will be an opportunity for India and Pakistan to open new communication channels. Since security matters in addition to economic ties are one of SCO’s priority working areas, normalization of the relations between Pakistan and India will be crucial in order to maintain the potential of becoming an important actor. Xia Yishan, who is a research fellow of Central Asian studies at the China Institute of International Studies, states that: “Besides adding 1.5 billion people under the SCO umbrella, the India-Pakistan admission may also help improve strained ties between India and Pakistan by opening another communication channel,” this statement underlines the new opportunity which may serve to provide stability in the region.[2] Total population of the SCO member countries is approximately 1.6 billion[3] and the total GDP is $11.6 trillion.[4]

However, Indian Deputy Foreign Minister Sujata Mehta stated that necessary procedures to be a full member of SCO might take one year. She said: "At the summit in Tashkent the process of India’s accession to SCO will begin with the signing of a commitment memorandum…Then, in accordance with the schedule set for us, we should join the agreements earlier signed within the SCO framework in order to become a full member of the association…It will take about a year to sign more than 30 documents."[5] Also referring to the membership process of the two countries, Russian presidential aide Yuri Ushakov said: "It is very important to emphasize this: the process of admission of India and Pakistan to SCO will enter the final stage and we hope that at the next summit that will be held in Kazakhstan, India and Pakistan will be finally admitted to SCO membership,". He also added that the membership application of the Iran will be discussed behind the closed doors.[6] In addition, Bakhtiyer Khakimov, who is Russia’s presidential representative for SCO affairs, stated that: “all partners understand that there are no principled objections to Iran's candidacy as such, but there are technical nuances as to when the process should be launched," underlining the support for Iran’s membership.[7] Iran applied for a full membership to the SCO in 2008, after gaining an observer status along with India and Pakistan in 2005, but due to regulations of the SCO such as in order to apply for a full membership a country should not be under the sanctions of the United Nations, the process was pending. But since the sanctions have been lifted now, Iran has started to openly declare its motivation to become a full SCO member and re-applied for full membership last year.[8]

Currently, because of the obstacles Iran faces, India and Pakistan are ahead of Iran with the membership process. But both China and Russia give positive signals regarding the Iran’s aspirations to join the club. Preparations for India and Pakistan’s memberships officially started in Dushanbe, Tajikistan, in 2014 where the 13th annual summit of SCO took place. While commenting on Iran’s membership application, Chinese Foreign Minister Wang Yi  stated: “We fully endorse Iran’s interest in this issue (of joining the SCO). At the moment, we should focus on the issue of the accession of India and Pakistan.”[9] Also, commenting on Iran’s membership application, Bakhtiyer Khakimov stated in May 2016 that there is a “common understanding that Iran is a real candidate for joining SCO as an official full-fledged member. We do not see any obstacles, taking into account the fact that sanctions are being lifted”.[10]

The overall aim of the regional organization can be summed up as covering security issues, boosting cooperation, promoting connectivity via investing in infrastructure for transportation corridors and providing bases for further engagement among member countries.  The goals of SCO are identified as follows: to strengthen mutual trust, friendship and good-neighborliness between the member States; to encourage effective cooperation between them in the political, trade and economic, scientific and technical, cultural, educational, energy, transport, environmental and other spheres; and to undertake joint efforts for the maintenance of peace, security and stability in the region, and the building of a new, democratic, just and rational international political and economic order[11]. Consequently, if managed accordingly, these developments will give SCO a global role which will not challenge the current international structures; on the contrary, the organization can introduce a potential to serve as a complementary tool via building beneficial structures dealing with regional issues on the regional level.

However, Russia’s and China’s motivations within the organization differ from each other. China adopts more economy-oriented policy in its foreign policy and focuses on “One Belt – One Road” initiative whereas Russia is in a deep struggle with the West and pro-Western actors. Also the interests of the other members should be taken into account. In order to build sustainable bases for regional stability and development of beneficial ties, it is important to give regional countries active roles for the adaptation win-win policies and internalizing regional issues without the domination of any powers. Moreover, engaging observer countries (namely Iran, Afghanistan, Belarus and Mongolia) and dialogue partners (namely; Armenia, Azerbaijan, Cambodia, Nepal, Sri Lanka and Turkey) also have upmost importance. Expansion also can be an added value in terms of long-term visions for the organization. The start of the India and Pakistan’s membership processes can be given as examples.

As for Iran, one of the main motivations behind the membership aspiration can be said as expanding its influence area throughout Asia, reaching to Chinese and Russian markets, as well as Central Asia additional to regions’ role as a corridor. Connecting the Persian Gulf to abovementioned regions and having access to South China Sea via member countries will be also on Iran’s list of benefits. SCO is important for Iran to be aligned with a regional organization and ease the isolation; Iran’s membership is important for SCO in order it to expand its area of influence with a country holding important ports, energy resources, and economic potential. However, such an addition has the potential to go far beyond the SCO region: if Iran is indeed admitted to the SCO, it can be the connector between Asia and Europe via Turkey and Azerbaijan, thereby opening up all manner of new possibilities for trade and the transfer of energy resources from East to West and from West to East.

[11] Ministry of Foreign Affairs of the Republic of Uzbekistan, THE MAIN DOCUMENTS OF THE SHANGHAI COOPERATION ORGANIZATION, HTTP://WWW.MFA.UZ/EN/PRESS/SCO-UZBEKİSTAN/DOCUMENTS/