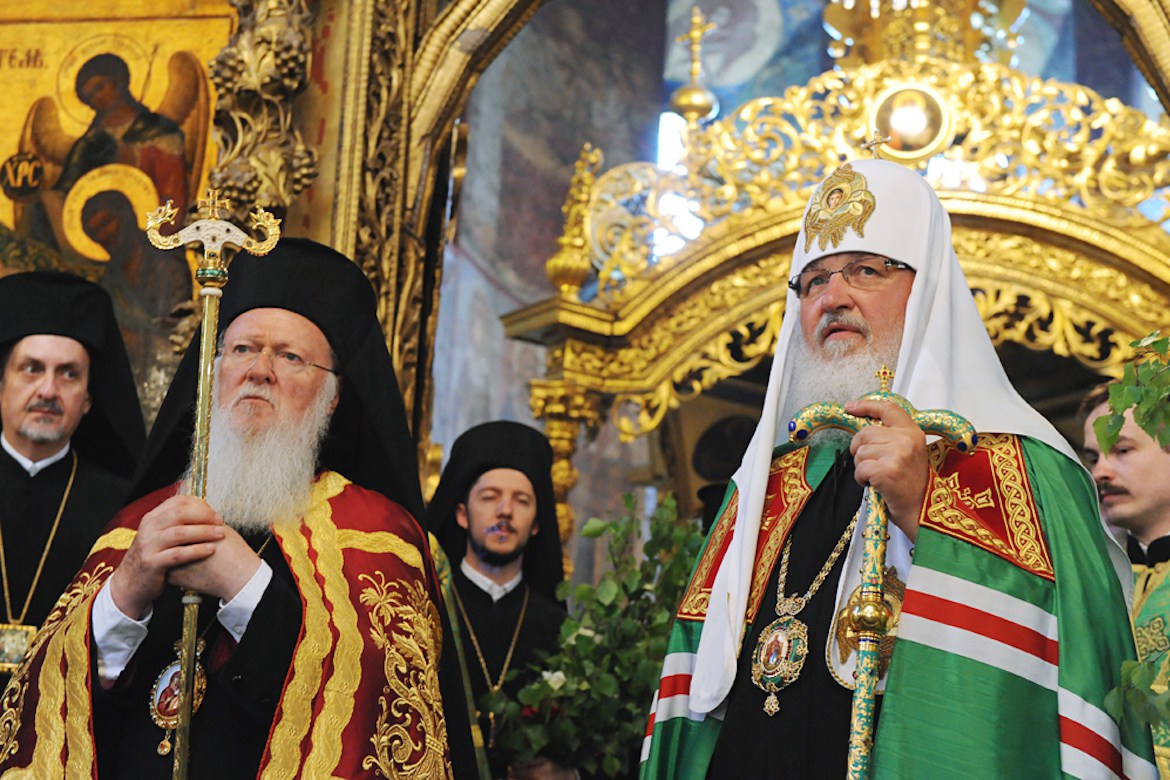 The Christian ecumenism process that AVİM has drawn attention to in its various articles[1] has come under the risk of being disrupted due to a recent important development; there is the possibility that the Ukrainian Orthodox Church - Kiev Patriarchate may attain autocephaly (the status of a church being administratively independent from other churches) and this possibility has caused a confrontation between two Eastern Orthodox churches – the Greek Patriarchate of Istanbul (Constantinople) and the Moscow Patriarchate. While this development may at first glance seem solely a religious issue, it in fact has political dimensions as well. However, before delving into such matters, it would be beneficial to remind the reader what “ecumenism” means in the context of the Christianity.

One of the three Abrahamic religions, Christianity has, in the course of time, separated into three main branches due to theological disputes and political conflicts: Catholicism, Orthodoxy, and Protestantism. While Catholic Christianity is represented by a single church institution (the Roman Catholic Church), Orthodox and Protestant Christianity are represented by different churches as a reflection of different religious movements and political formations. Despite all their disagreements and differences, these various churches endeavor to emphasize their commonalities and seek to maintain cooperation amongst each other. This partnership and cooperation process, which has no centralized management, is known as ecumenism. A more detailed explanation for ecumenism is as follows:

“… To put it briefly, we use this term [ecumenism] in the way it was used in the Second Vatican Council and by those who officially brought it to use in Catholic theology, within solely a Christian context, and in a solely theological meaning. Ecumenism… for us only means unitatis redintegratio (the re-establishment of unity); in other words, the re-constitution of the unity that originates between Jesus Christ and those who have been baptized, but which has become endangered or broken down within the course of time. Therefore, ecumenism is neither solely “peaceableness”, “dialogue”, nor “meeting”, and furthermore, neither is it “tolerance” (rather, the term tolerance carrying a “negative” quality takes on a positive quality [inversely] proportional to the “sternness” of the human heart); while ecumenism contains all of these, it rests upon the mystical truth of Christianity and, for this reason, it is defined through the fundamental connection that Christians establish with the mystique of Jesus Christ.

While the propensity for unitatis redintegratio defines ecumenism through its teleology and the tension it creates within the body of the church, overcoming the apparent different orientations to reach the underlying unity, this main principle, may be evaluated as the fundamental methodology of being ecumenical.”[2]

Different examples can be given for activities meant to further ecumenism in the Christian world: a) the activities carried within the structure of the World Council of Churches (the largest Christian organization in the world),[3] b) the relations between the World Council of Churches and the Roman Catholic Church (the largest church in the world), c) the organization of a new “Holy and Great Council” (despite the lack of full attendance) in 2016 in Crete by Eastern Orthodox Churches 1200 years after the previous one,[4] d) the meeting held between Pope Francis (the spiritual leader of the Roman Catholic Church) and Patriarch Kirill (the spiritual leader of the Russian Orthodox Church/Moscow Patriarchate, the largest Orthodox church in the world) in 2016 in Cuba,[5] e) as an example of interest to Turkey: the unquestioned support shown in the past by the World Council of Churches and Pope Francis towards the Armenian genocide narrative.[6]

Leaving aside these developments that may be deemed positive for the Christian world, disagreements that go on to spark crises occur as well between various churches. The most important crisis in the agenda right now is the one between the Greek Patriarchate of Istanbul (Constantinople) and the Moscow Patriarchate over the issue of Ukraine. It will beneficial to introduce both churches before proceeding to the details of the crisis.

Judging by the discourse put forth today by the Moscow Patriarchate, it could be said that the “third Rome” mentality continues onto present day and that some of the activities of the Patriarchate are geared towards damaging the status of the Greek Patriarchate of Istanbul. For example, Moscow Patriarch Kirill, during his meeting with Pope Francis in 2016 in Cuba, gave the impression he was the leader of the Eastern Orthodox world.[11] However, the religious official whose status and power most closely resembles Pope Francis is the Greek Patriarch of Istanbul. To give another example, the Moscow Patriarchate, at the last moment, decided not to attend the “Holy and Great Council” of 2016 that was gathering in Crete under the chairmanship of the Greek Patriarch of Istanbul (three other churches also chose not to attend the Council). In this way, the “pan-Orthodox” and even more so the “ecumenical/universal” attribute of the Council was called into question.[12]

Since the collapse of the Soviet Union and Ukraine gaining its independence, Ukrainian state officials and patriots have been involved in activities to create a Ukrainian national identity distinct from Russian identity. Up until now, however, these activities had not produced tangible results; Ukrainian people did not or could not perceive themselves as being that different from Russian people. However, after the domestic turmoil that began in Ukraine in 2014 and due to Crimea’s annexation by Russia and the eruption of the separatist movement in eastern Ukraine with Russia’s support, there have been significant changes in Ukraine’s public opinion and a Ukrainian identity distinct from Russian identity has begun to become prominent.

The establishment of an Ukrainian Orthodox Church independent from the Moscow Patriarchate that has recognition in the Eastern Orthodox world come to mean Ukraine’s moral disengagement from Russia (it should be noted that Ukraine has great strategic, political, historical, and cultural importance for Russia). Ukrainian Orthodox people had already begun slowly disengaging from the pro-Russian Ukrainian Orthodox Church and becoming followers of the Kiev Patriarchate due to the conflict in Ukraine.[17] It is being predicted that the Kiev Patriarchate obtaining recognition in the Eastern Orthodox world will convince the Ukrainian Orthodox people hesitating to make a choice and speed up their shift towards the Kiev Patriarchate.[18] Taking all of these into consideration, Ukraine has made attempts in the previous years towards the Greek Patriarchate of Istanbul on both a governmental and a parliamentary level. During a speech this April, the Ukrainian President Petro Poroshenko summarized Ukraine’s stance on this matter with the following words; “this isn’t a religious matter. It isn’t simply a matter of state either. It’s a historic event, when Ukraine’s own church will return home after hundreds of years.”[19] Apart from Ukrainian politicians, this issue is also important for Ukrainian public opinion, because even for the Ukrainians who do not describe themselves as being as religious, Orthodoxy is an important part of Ukrainian national identity and, in this respect, it has become a necessity to have a Ukrainian Orthodox Church independent of a Russia that is beginning to be perceived as a rival (and sometimes as an enemy). Terms such as autocephaly and tomos (religious decree – in this regard, the declaration of the granting of autocephaly) have become commonly used in Ukrainian press and amongst Ukrainian people.[20]

In response to these developments, the Moscow Patriarchate’s Chairman of the Department for External Church Relations Metropolitan Hilarion of Volokolamsk issued several statements and the Patriarchate’s Holy Synod held an extraordinary session. Considering the statements of Metropolitan Hilarion[23] and the documents regarding the Holy Synod session,[24] it is understood that the Moscow Patriarchate is discussing the inner functioning and historical development of the church system in the Eastern Orthodox world and is scrutinizing its relations with the Greek Patriarchate of Istanbul.

The Greek Patriarchate of Istanbul has responded to the Moscow Patriarchate’s criticisms and elaborated on its autocephaly decision through a recently published newspaper interview. Concerning this issue, the Patriarchate stated:

“… It is, therefore, within the duties of the Ecumenical Patriarchate to determine when it is time for a Church to become autocephalous. In this determination, our Patriarchate always maintains the same criteria: The Church must be based in an independent state, while the petition for autocephaly must be made by that church and state. In the case of Ukraine, our Patriarchate is doing exactly the same as it has done in all other cases. Consequently, the reaction of the Moscow Patriarchate cannot be interpreted with ecclesiastical criteria…”[30]

While religious doctrine arguments rage on about the issue of the establishment of a Ukrainian Orthodox Church independent from the Moscow Patriarchate, as it can be understood from what has been explained above, this situation also has political dimensions. Even though the Greek Patriarchate of Istanbul’s activities in the Orthodox world regarding religious matters do not directly concern Turkey, the political consequences that these activities may create will concern Turkey. Therefore, it will be beneficial for Turkish officials and public to follow this matter closely so that Turkey will be better prepared for the political developments that may occur as a result of this matter.[32]

* Photograph: http://www.pappaspost.com (the Greek Patriarch of Istanbul Bartholomew I on the left, the Moscow Patriarch Kirill on the right)

[3] Tulun, “What Is the World Council of Churches?”

[6] Tulun, “What Is the World Council of Churches?” ; Mehmet Oğuzhan Tulun, “Introducing Religion into a Legal and Historical Dispute,” Center for Eurasian Studies (AVİM), Commentary No: 2015/45, April 12, 2015, https://avim.org.tr/en/Yorum/INTRODUCING-RELIGION-INTO-A-LEGAL-AND-HISTORICAL-DISPUTE

[7] The Grand National Assembly of Turkey (GNAT), having been very troubled by the activities the Greek Patriarchate of Istanbul had been involved in the during the last period of the Ottoman Empire, wanted the Patriarchate to be moved out its territory to somewhere else (such as Mount Athos in Greece, which is of spiritual importance for Orthodox Christianity). However, the Western countries that participated in the Lausanne Peace Conference were strongly against GNAT’s demand. In the end, GNAT and the Western countries reached a compromise; the Greek Patriarchate of Istanbul would remain as a Turkish institution solely involved in religious affairs and Turkey would not recognize “ecumenical” adjective used by the Patriarchate in its external relations (since GNAT, noting that recognizing the “ecumenical” adjective would result in a state within a state, declared this to be unacceptable). Please see the relevant statement made by İsmet İnönü (who represented GNAT during the Lausanne Peace Conference) in the proceedings of the Conference: Lozan Barış Konferansı - Tutanaklar – Belgeler, Cilt 1, Kitap 1, çevir. Seha L. Meray (Ankara: Ankara Üniversitesi Siyasal Bilgiler Fakültesi Yayınları No. 291), p. 331

[8] The official website of the Greek Patriarchate of Istanbul: https://www.patriarchate.org/

[11] Coyer, “The Patriarch, the Pope and An Old Play from Russia's Geopolitical Playbook.”

[21] Kuzio, “Why Independence for Ukraine’s Orthodox Church Is an Earthquake for Putin.”

[25] “Metropolitan Hilarion: Patriarch Bartholomew will bear personal responsibility before the judgement of God and the judgement of history.” ; “The Will Of Orthodox Christians In Ukraine: Metropolitan Hilarion (Alfeyev) Vs. The Statistics,” OrthodoxyInDialogue.com, September 9, 2018, https://orthodoxyindialogue.com/2018/09/09/the-will-of-orthodox-christians-in-ukraine-metropolitan-hilarion-alfeyev-vs-the-statistics/

[28] “Metropolitan Hilarion: The decision to suspend the liturgical mention of the Patriarch of Constantinople does not imply breaking off the Eucharistic communion.”

[31] Coyer, “The Patriarch, The Pope And An Old Play From Russia's Geopolitical Playbook.”

[32] To add as a final development: according to a news report, the subject of an independent Ukrainian Orthodox Church was not on the agenda during the meeting between President of Turkey Recep Tayyip Erdoğan and President of Russia Vladimir Putin in Sochi/Russia last week,: “Kremlin spokesman says Putin, Erdogan did not discuss Ukrainian Church split,” TASS, http://tass.com/politics/1021971