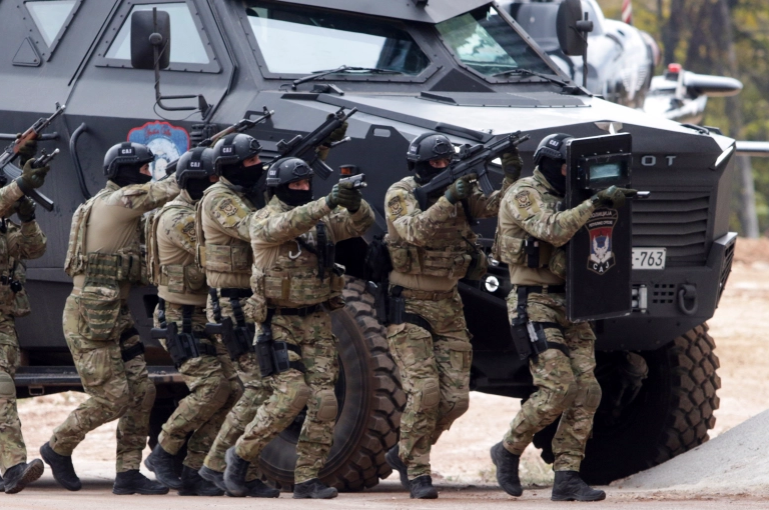 AVİM has been consistently drawing attention to the developments in Bosnia and Herzegovina (BiH) that threaten the country's sovereignty and territorial integrity. In this context, in our analysis entitled “Why Should the Role of The Peace Implementation Council and OHR Continue In  Bosnia And Herzegovina?”, we asserted the view that the continuation of the powers of the Peace Implementation Council (PIC), including the Bonn Powers, is essential for the preservation of the sovereignty and territorial integrity of Bosnia-Herzegovina in face of the secessionist threats of Milorad Dodik, the Serb member of the Presidency of BiH.[1] In our following analysis titled “Slovenian Document on Dismemberment of Bosnia-Herzegovina Confirms the Necessity of Continuing the PIC-OHR-Bonn Powers,” we explained how a non-paper suggested redrawing the borders in the Balkans ploy and sought to dismember BİH. The non-paper is   purported to have been prepared by the EU member Slovenia (currently holding  EU presidency) and sent  to Charles Michel, President of the European Council.[2] We stated that reckless proposals contained in the non-paper could lead to bloodshed in the Balkans and spill over to whole Europe.

Recent developments reveal that the dangers we have expressed in our analyzes have reached a level that can no longer be swept under the carpet, and that the territorial integrity of BiH is under  serious  and imminent threat. For instance, The Guardian newspaper reports these developments in an exclusive article by the World Affairs editor entitled "Bosnia is in danger of partition, warns top international official."[3] The exclusive article, with reference to BiH High Representative reflects the view that BiH is in imminent danger of breaking apart, and there is a very real prospect of a return to conflict.

In the midst of these serious developments, the new High Representative of BiH, Christian Schmidt,  submitted the  60th Report of the High Representative for Implementation of the Peace Agreement on Bosnia and Herzegovina to the UN Secretary General on 5 November 2021.[4] In summary, the report reflects the following views:

UN Security Council, following the debate of the issue, unanimously adopted resolution 2604 (2021) on 3 November 2021 under Chapter VII of the United Nations Charter. The Resolution authorized the Member States acting through or in cooperation with the European Union to establish a multinational stabilization force, or EUFOR-Althea, and renewed its authorization to maintain a NATO headquarters in the country for 12 months. EUFOR-Althea is mandated to help implement the military aspects of the Peace Agreement.[5]

As per information contained in the UN Meeting Coverage and Press Release, Council members and representatives of concerned States broadly welcomed the resolution but were divided about the absence of references in that text to the role played by the Office of the High Representative in implementing the civilian aspects of GFAP.[6] The representative of the USA expressed concern over Mr. Dodik’s statements indicating an intention to withdraw Republika Srpska “entirely” from the Government, adding that such assertions represent “a dangerous path” for Bosnia and Herzegovina and the wider region. Whereas the Russian Federation representative (he) warned that the worsening political situation in Bosnia and Herzegovina is being compounded by the irresponsible actions of several external forces. He claimed that some Western countries tried to appoint Christian Schmidt as the High Representative in violation of the established practice and insisted that the post remains vacant. He denounced the 30 October report by Mr. Schmidt as an “extremely biased and anti-Serb document aimed at destroying the glimmer of peace and cooperation among people in Bosnia.”  He further asserted that demonizing Serbs appears to be the policy of some external parties and called for an equitable discussion on ways to end that “outside trusteeship.”

Bosnia and Herzegovina’s representative said the country is facing its greatest existential threat of the post-war period. Republika Srpska’s move would “turn the clock back 15 years.” Its policy not only obstructing implementation of the Dayton Agreement, but reversing it, in a move tantamount to secession without proclaiming it. Serbia’s delegate (he) stressed that the mechanism for enacting a potential change in the Dayton Agreement requires consent of both entities and three constituent peoples, therefore, any attempt by any other party to impose a solution is unacceptable. He also underlined that Serbia, as a guarantor of the Dayton Agreement, supports the territorial integrity and sovereignty of Bosnia and Herzegovina and rejects decisions not reached by consensus.

The statement of the Croatia’s delegate (he) is attention grabbing. He said that the current electoral framework in BiH allows for “electoral engineering,” thereby depriving Croats in Bosnia and Herzegovina of their right to elect their legitimate representative in the State presidency. “This is unacceptable and has to be changed,” he stressed, adding that Croatia strongly supports legislative changes necessary for the election law to comply with rulings of the European Court of Human Rights and other relevant decisions. As might be expected, this statement of the Croatian delegate was supported by the EU delegation which has only observer status. The Head of the European Union Delegation, speaking in its capacity as observer, expressed regret that Bosnia and Herzegovina’s Constitution remains uncompliant with the European Convention on Human Rights. Calling for an inclusive process of electoral reform through genuine dialogue, in line with European standards, he said all forms of inequality and discrimination should be eliminated from the electoral process.

It is possible to say that the UN Security Council resolution summarized above has an unsubstantial content regarding the protection of BiH's sovereignty and territorial integrity. As it is apparent, the Russian Federation insists on the closure of the Office of the High Representative, openly declares that it does not recognize the new High Representative and acts as if Russian Federation is the true protector of the Bosnian Serbs. The US statement creates the impression of a nominal commitment to GFAP rather than a warning to those who want to break up BiH. It is not surprising that Croats and Serbs, two of BiH's three constituent peoples, enjoy dedicated support from Croatia and Serbia. The striking point here is that the Croatian representative made a "revisionist" statement at the Security Council, while the Serbian representative made a more balanced and careful statement. Unfortunately, as expected, Croatia's statement was supported by the EU Delegation.  It is known that the EU, rightly or mostly wrongly, blindly supports its member states. The developments in the Eastern Mediterranean is an example of such behavior. We witness every day that the EU unconditionally supports Greece and the Greek Cypriots in this region. However, this declaration of support by the EU for Croatia has a content that could lead to a dangerous path involving more revisionist developments in BiH. It is difficult to say that it is appropriate for the EU to make such a statement supporting the one constituent people at such a critical time. It would not be surprising if this kind of dedicated support helps open Pandora's box in BiH. Moreover, this statement of support protects Croatia in a way that is illogical and outside of established customs and ultimately puts  BiH's sovereignty and territorial integrity under threat.

As the above reveal, Bosniaks, one of the constituent and the most populous peoples of Bosnia and Herzegovina, were left without support and alone in the Security Council. At this critical juncture, Turkey, as a member of the Peace Implementation Council Steering Board, appears to be the only country to demonstrate its support to the Bosniaks, expose the EU's inaction and partisan attitude in BiH, to collaborate with the US in defending the rights of Bosniaks, and not give others an opportunity to drive Bosniaks into a corner. Turkey's historical responsibility to the kin and brotherly communities in the Balkans necessitates such an attitude and behavior.