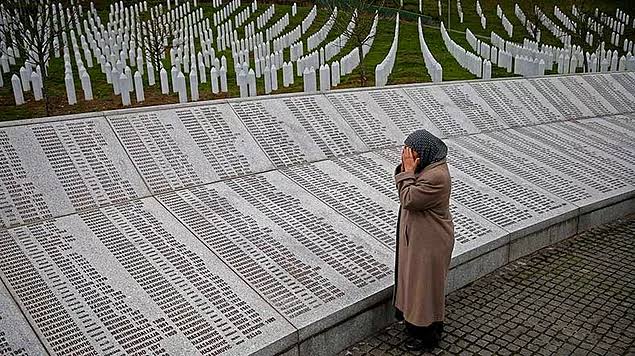 The 1995 Srebrenica Genocide is considered to be the greatest human tragedy in Europe after the Second World War. It continues to be a bleeding wound even after 24 years for the people who have been affected by this tragedy. The anniversary of the genocide is commemorated at the Srebrenica–Potoçari Memorial and Cemetery for the Victims of the 1995 Genocide located in the Rebublica Srpska entity of Bosnia-Herzegovina. It is reported in the press that this year, 33 more victims of the genocide were buried at the Potoçari Memorial Cemetery alongside other victims of the same fate. It should be noted that the identification of victims of this genocide is still proceeding. According to press reports, “there are 140 more victims who have been identified at the Podrinje Identification Centre in Tuzla (Bosnia-Herzegovina) at present, but their families have still not decided to bury them, mainly because the remains are incomplete.”[1]

The anniversary of the genocide that occurred at Srebrenica and the burial of those who lost their lives is an anniversary that reminds us of this deep pain every year. This is valid for the Bosniak nation as well as for the Turkish people.

The International Criminal Tribunal for the Former Yugoslavia (ICTY) Rulings

The formal title of the ICTY is “The International Tribunal for the Prosecution of Persons Responsible for Serious Violations of International Humanitarian Law Committed in the Territory of the Former Yugoslavia since 1991”. It is commonly referred to as ICTY. It was a body of the United Nations established to prosecute serious crimes committed during the Yugoslav Wars, and to try their perpetrators. The Tribunal was an ad hoc court located at The Hague, Netherlands and operated as three Trial Chambers and one Appeals Chamber. According to its website, which is kept active “as a monument of its accomplishments”, the mandate of the ICTY lasted until 2017. The said website states that the ICTY “irreversibly changed the landscape of international humanitarian law, provided victims an opportunity to voice the horrors they witnessed and experienced, and proved that those suspected of bearing the greatest responsibility for atrocities committed during armed conflicts can be called to account.”[2]

One of the important ruling of the ICTY, which explicitly refers to what had happened in Srebrenica in 1995, is the Prosecutor vs.  Radislav Krstic case.[3] Radislav Krstic was a General-Major in the Bosnian Serb Army (VRS). He also was a member of the VRS Main Staff. Radovan Karadžić, the President of the Republica Srpska and Supreme Commander of the VRS, assigned Krstic with command responsibility for the Drina Corps, a sub-unit of the VRS responsible for Srebrenica. VRS soldiers removed Bosnian Muslim women, children, and the elderly from the Srebrenica enclave. The men who remained were systematically murdered. This was the plan devised by the VRS Main Staff.

Trial Chamber Judgement of the case briefly but strikingly explains what had happened in Srebrenica in its first paragraph as follows:

“The events surrounding the Bosnian Serb take-over of the United Nations (UN) ‘safe area’ of Srebrenica in Bosnia and Herzegovina, in July 1995, have become well known to the world. Despite a UN Security Council resolution declaring that the enclave was to be ‘free from armed attack or any other hostile act’, units of the Bosnian Serb Army (VRS) launched an attack and captured the town. Within a few days, approximately 25,000 Bosnian Muslims, most of them women, children and elderly people who were living in the area, were uprooted and, in an atmosphere of terror, loaded onto overcrowded buses by the Bosnian Serb forces and transported across the confrontation lines into Bosnian Muslim-held territory. The military-aged Bosnian Muslim men of Srebrenica, however, were consigned to a separate fate.  As thousands of them attempted to flee the area, they were taken prisoner, detained in brutal conditions and then executed. More than 7,000 people were never seen again.”

Paragraph 599 of the Judgement states that;

“The Trial Chamber has thus concluded that the Prosecution has proven beyond all reasonable doubt that genocide, crimes against humanity and violations of the laws or customs of war were perpetrated against the Bosnian Muslims, at Srebrenica, in July 1995.”

According to Press Release by the UN, in reading out the Sentencing Judgement of Trial Chamber, Presiding Judge Almiro Rodrigues said that “The Trial Chamber is also convinced beyond any reasonable doubt that a crime of genocide was committed in Srebrenica.”[4]

Chamber sentenced Radislav Krstic to 46 years imprisonment. Kristic and the Prosecution both filed appeals regarding the judgement. On 19 April 2004, a five-member panel of the ICTY Appeals Chamber exercised its review powers and found insufficient evidence that Krstic possessed the specific intent required to be convicted as a direct perpetrator of genocide based on joint criminal enterprise. The Appeals Chamber substituted a conviction for secondary involvement and found Krstic guilty of aiding and abetting genocide and then sentenced him to 35 years imprisonment.[5]

The Appeals Chamber, at the same time, found that genocide was committed in Srebrenica in 1995 by Bosnian Serb forces whose leadership had genocidal intent. In this context, the paragraph 35 of the Appeal Chamber judgement states the following;

“In this case, the factual circumstances, as found by the Trial Chamber, permit the inference that the killing of the Bosnian Muslim men was done with genocidal intent.  As already explained, the scale of the killing, combined with the VRS Main Staff’s awareness of the detrimental consequences it would have for the Bosnian Muslim community of Srebrenica and with the other actions the Main Staff took to ensure that community’s physical demise, is a sufficient factual basis for the finding of specific intent. The Trial Chamber found, and the Appeals Chamber endorses this finding, that the killing was engineered and supervised by some members of the Main Staff of the VRS. The fact that the Trial Chamber did not attribute genocidal intent to a particular official within the Main Staff may have been motivated by a desire not to assign individual culpability to persons not on trial here. This, however, does not undermine the conclusion that Bosnian Serb forces carried out genocide against the Bosnian Muslims.” [emphasis added by author]

The intent of genocide was more openly explained in paragraph 37 as follows;

“The gravity of genocide is reflected in the stringent requirements which must be satisfied before this conviction is imposed. These requirements – the demanding proof of specific intent and the showing that the group was targeted for destruction in its entirety or in substantial part – guard against a danger that convictions for this crime will be imposed lightly. Where these requirements are satisfied, however, the law must not shy away from referring to the crime committed by its proper name. By seeking to eliminate a part of the Bosnian Muslims, the Bosnian Serb forces committed genocide.  They targeted for extinction the forty thousand Bosnian Muslims living in Srebrenica, a group which was emblematic of the Bosnian Muslims in general. They stripped all the male Muslim prisoners, military and civilian, elderly and young, of their personal belongings and identification, and deliberately and methodically killed them solely on the basis of their identity. The Bosnian Serb forces were aware, when they embarked on this genocidal venture that the harm they caused would continue to plague the Bosnian Muslims. The Appeals Chamber states unequivocally that the law condemns, in appropriate terms, the deep and lasting injury inflicted, and calls the massacre at Srebrenica by its proper name: genocide. [emphasis added by author] Those responsible will bear this stigma, and it will serve as a warning to those who may in future contemplate the commission of such a heinous act.”

It should be underlined that ICTY with these judgements ruled that in Srebrenica a genocide was committed against the Bosnian Muslims. This judgement afterwards also repeated by the International Court of Justice.

ICJ, in its judgement of 26 February 2007, by thirteen votes to two, found that;

“Serbia has not committed genocide, through its organs or persons whose acts engage its responsibility under customary international law, in violation of its obligations under the Convention on the Prevention and Punishment of the Crime of Genocide.”[6]

The judgement, at the same time, endorsed that the crime of genocide was committed in Srebrenica. In this respect, paragraph 297 of the ICJ Judgement states the following:

“The Court concludes that the acts committed at Srebrenica falling within Article II (a) and (b) of the Convention were committed with the speciﬁc intent to destroy in part the group of the Muslims of Bosnia and Herzegovina as such; and accordingly that these were acts of genocide, committed by members of the VRS in and around Srebrenica from about 13 July 1995.” [emphasis added by author]

The said ICJ judgement repeats this intent of genocide in Srebrenica in paragraphs 376 and 379 with the following sentences:

“376. Having however concluded (paragraph 297 above), in the speciﬁc case of the massacres at Srebrenica in July 1995, that acts of genocide were committed in operations led by members of the VRS, the Court now turns to the question whether those acts are attributable to the Respondent. […]

379. In view of the foregoing conclusions, the Court now must ascertain whether the international responsibility of the Respondent can have been incurred, on whatever basis, in connection with the massacres committed in the Srebrenica area during the period in question. For the reasons set out above, those massacres constituted the crime of genocide within the meaning of the Convention.”

As the information given above shows, the massacre of Muslim Bosniaks in Srebrenica in 1995 is genocide according to the provisions of the 1948 Genocide Convention. The legal decision on this matter was made by the competent international courts. In reaching this conclusion, each evidence was examined in detail for years. Each accusation was handled separately and carefully evaluated.

In accordance with the provisions of the Genocide Convention;

“Persons charged with genocide or any of the other acts enumerated in the Convention shall be tried by a competent tribunal of the State in the territory of which the act was committed, or by such international penal tribunal as may have jurisdiction with respect to those Contracting Parties which shall have accepted its jurisdiction.”

Therefore, political figures or parliaments have no authority whatsoever to arbitrarily decide on the veracity of genocide claims. Such arbitrary decisions at best constitute non-binding, extralegal declarations of opinion.

The painful experiences at Srebrenica continue to show us how empty and meaningless the arbitrary genocide accusations are. Furthermore, such arbitrary accusations run the risk of diminishing in people’s perception the gravity of the crime of genocide. It is useful for those who make unsubstantiated genocide claims to first visit the monument and cemetery in Srebrenica. They will understand what genocide really is in Srebrenica.

[6] “Case Concerning Application of the Convention on the Prevention and Punishment of the Crime of Genocide (Bosnia And Herzegovina V. Serbia and Montenegro). Judgment of 26 February 2007,” https://www.icj-cij.org/files/case-related/91/091-20070226-JUD-01-00-EN.pdf