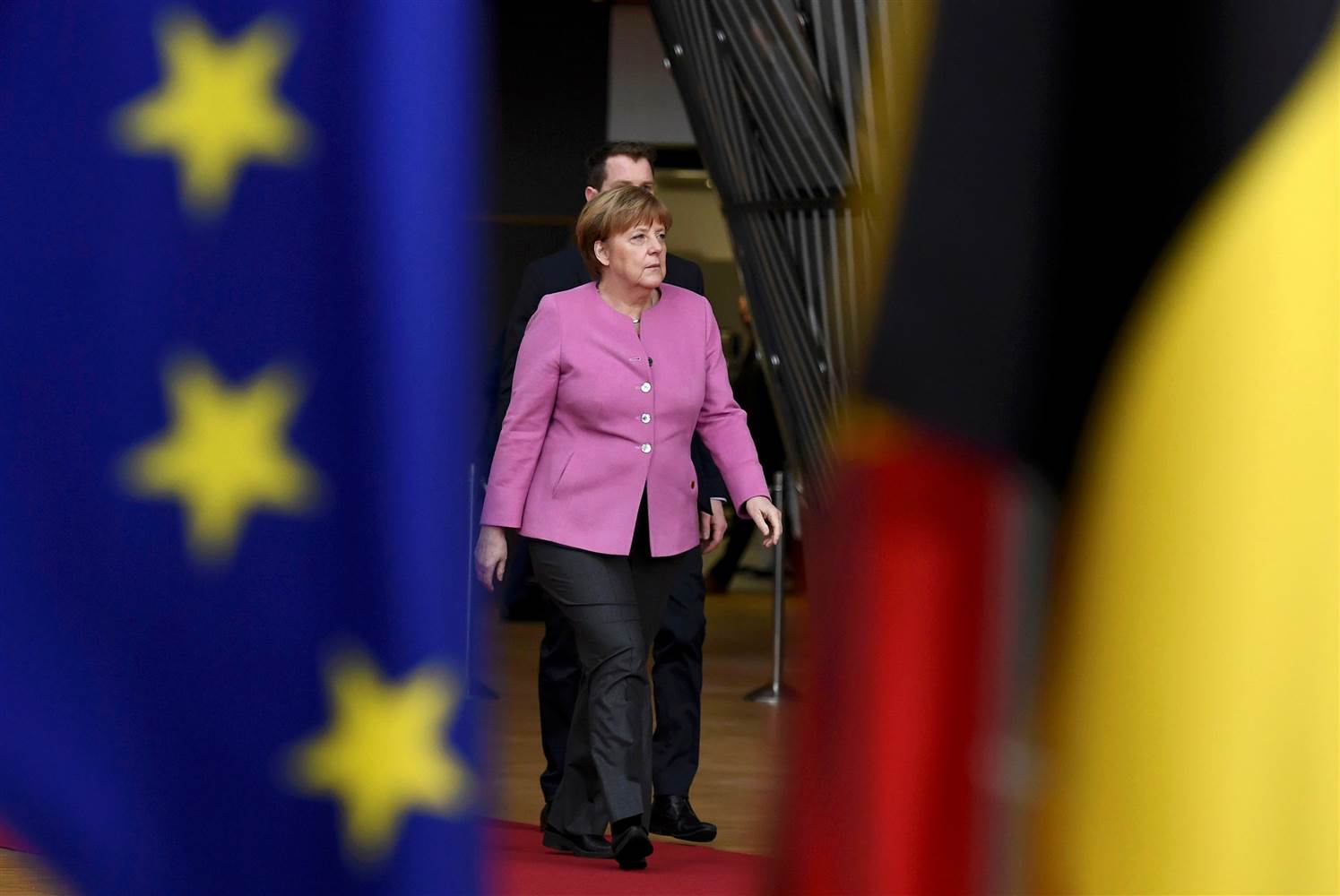 German foreign policy after the Second World War was defined by several different phases. During the first phase, the politicians of the Federal Republic of Germany (FRG) were confronted by the necessity of deciding to re-integrate into the Western political community (1949–1955). The second phase started with the birth of the “Eastern Treaties” (1969–1972). The third phase started over the issue of the modernization of the FRG’s military capabilities (1977–1983). The fourth phase started in with the reunification of FRG and German Democratic Republic (1990-2017).[1]

German foreign policy began to experience several challenges over the last years that the government either chose to ignore or dealt with inadequately. In fact, not only the German government, German politics as a whole decided to ignore the changes in the international arena such as the repositioning of Greece in the international economic arena after the 2008 economic crisis, the unfulfilled promises to Turkey both in the European Union and international politics (migrant deal) and subsequent repositioning of Turkey in the international arena, the February 2014 annexation of Crimea by the Russian Federation, the subsequent developments that Europe and particularly European Union is still coping with after the June 2016 Brexit referendum, and lastly, the crisis that has erupted after the the last visit of the United States of America (USA) President Trump to the Middle East and Europe.

President Trump, in a meeting with the European Union officials, stated that “the Germans are bad, very bad”. In this case, the most important focus of President Trump’s speech was German trade policy, specifically, how German investment is implemented in the car manufacturing industry.[2] However, President Trump did not halt there. He continued this theme during his North Atlantic Treaty Organization (NATO) speech. Despite his previous indications that he would do so, he did not make any promise that USA would keep its promise regarding the mutual-aid clause (Article 5) of NATO. This has further extended the cloud of ambiguity over the relationship between the USA and its European allies. Not only did he not endorse Article 5, he criticized most of the members of NATO. Specifically, he criticized 23 members of the alliance for not fulfilling all their obligations to the Alliance (mostly concerning these members not paying their dues to the Alliance).[3]

How did Germany respond to these changes in the international arena? Germany, from Foreign Minister Sigmar Gabriel to Prime Minister Angela Merkel, began to give stern responses to the USA. Gabriel sternly stated that “anyone who accelerates climate change by weakening environmental protection, who sells more weapons in conflict zones and who does not want to politically resolve religious conflicts is putting peace in Europe at risk”.[4] He further stated that “The short-sighted policies of the American government stand against the interests of the European Union … the West has become smaller, at least it has become weaker”.[5]

This is not a surprise considering how Germany, for example, had begun to respond to the United Kingdom (UK). Manfred Weber, chairman of the EPP group had argued that UK had to be punished for its so called “mistake” of the “Brexit”. For this, he argued that the UK must experience what some call a “Hard Brexit” and thus lose all its privileges in the context of its relationship with the EU and experience significant loses. Despite such vindictive words from Weber, nobody from the German political scene raised an objection.[6]

These attacks from Germany continued with Prime Minister Merkel:

"The times when we could completely rely on others are, to an extent, over… I experienced that in the last a few days, and therefore I can only say that we Europeans must really take our fate into our own hands, of course in friendship with the United States and in friendship with Great Britain and as good neighbors wherever it is possible, also with Russia and also with all the other countries… But we need to know that we have to fight for our own future and destiny as Europeans.”[7]

Merkel built upon both Manfred Weber’s and Gabriel Stern’s speech in a campaign speech in Munich last Monday by using the words of USA President John Fitzgerald Kennedy. She stated the following; “With change comes insecurity, skepticism... and, not infrequently, the glorification of the supposedly good old days… Particularly in view of the complexity of global contexts, a wish for simple answers spreads… But anyone who puts on national blinkers and has no view of the world around him will ultimately get lost.”[8] Simply put, Germany has made it clear that it no longer trusts the USA and the UK as security partner.

Has Germany only responded verbally to the actions of USA and UK so far? It has not. Two examples can be given to this. First is its subtle attempt at starting to build a European Army. Every few years, the idea of a European army reemerges. The building of a European Army is seen as a necessity, but due to the difficulties (inter-state politics, bureaucratic red-tape, limited funds etc.) involved in building such military force, it is also seen as a fantasy. This year, quietly, away from Washington, London, and Brussels, Germany and its two allies took an unusual step towards collective European security.[9] Under this new arrangement, Romania and Czech Republic will both send one brigade so they can join the German Armed Forces. The Romanian and Czech forces will follow the footsteps of the two Dutch Brigades that had already joined the German Armed Forces. This allows the European states to avoid the messy politics and long bureaucratic process of establishing European Army.[10]

Secondly, as Germany and the USA are distancing from each other both politically and economically, Germany has chosen new paths. One of them is India. Apparently, the latest visit of Indian Prime Minister Narendra Modi will allow to shape this new path. Apparently, the aim is for Germany to reorient itself, especially economically to India and other promising East and South East Asian countries.[11] Germany is calling on different global players to reorient Germany’s political and economic aims after the disappointment it experienced from Brexit and Trump coming to power in the USA.

Its relationship with China is somewhat different than with India. Germany had already began to develop and deepen its relationship with China. Last year in April, tje fourth round of German-Chinese of Inter- governmental talks were held in China. Then the German Foreign Minister, Frank-Walter Steinmeier had expressed his thanks towards the Chinese cooperation in different economic sectors.[12] After the recent Brexit crisis and speech delivered by its President  Steinmeier, Germany has decided to even further enhance its and EU’s relationship with China. In such an effort, Premier Li Keqiang's will make a visit to both Germany and Belgium.[13]

Germany seems to have developed and is on road to further developing new responses to the challenges arising from new changes in the international arena. It particularly seems to be ready now to deal with the challenges put forth by Trump and the Brexit. It began to make certain open moves such as criticizing the UK and the USA for its actions. It began to also make certain subtle moves, such as incorporating units from neighboring armed forces into its own armed forces or beginning to further deepen its relationship with different actors such as India and China.

Yet, despite these reactive and defensive actions, there are certain segments of its foreign relations which Germany is either neglecting or is purposely and aggressively driving into a crisis atmosphere. Its relations with Turkey falls into this category. As Europe’s future is faced with serious questions, and crucial components of that future are now not functioning as they should be, Turkey, in such an environment, plays a crucial role. In fact, it can be said that Turkey, whether fellow Europeans like it or not (or would like to admit it or not), plays a crucial role economically, socially, and military in Europe’s future.

Despite this fact, Germany does not bestow the proper importance to its relationship with Turkey. To the contrary, a policy of German antagonism appears to be the case. Numerous examples can be given such as the perennial issue of terrorism to the more recent the İncirlik Airforce Base case. In June 2016, the German Bundestag decided to adopt a symbolic resolution regarding the events that have occurred during the First World War in Anatolia. The resolution that has been adopted by the Bundestag referred to the events as the "Armenian Genocide". The German government subsequently supported this resolution. The unspecified number of members of the Bundestag and German government decided to completely ignore the pain that was endured during the first world by Turks in Anatolia. Furthermore, they decided utilize and abuse historical events for their own current political objectives.[14]

If we turn our attention to terrorism, Germany, even though it restricted the gatherings of pro Turkish gatherings, has for inexplicable reasons allowed the gatherings of pro Kurdistan Workers Party (PKK) gatherings (it should be noted that Germany officially designates PKK as a terrorist organization). For example allowed a mass of 30,000 people to gather in Frankfurt on 18 March 2017.[15] This is a very interesting hypocritical move from a state, which claims to fight terrorist organizations such as ISIS. If Germany does stand against terrorism, then why does it allow the mass gathering of an organization that is responsible for the deaths of tens of thousands in Turkey?

Another recent example, the German Prime Minister Angela Merkel told reporters that she spoke with Turkish President Recep Tayyip Erdoğan regarding Germany Parliament members' right to visit German troops stationed at İncirlik Airforce base. Unless a visitation right is granted, the German government has declared that it will to decide to withdraw from the base by mid-June.[16]

Last example is Germany’s willingness to grant asylum to suspects of the plotters of the 15 July 2016 attempted coup in Turkey. Germany has so far allowed entry of 262 suspected coup plotters into the country. It has not yet divulged information regarding how many of them demanded asylum. Yet the fact that Germany has allowed these individuals, coup plotters to enter the country is enough to strain the relationship between the two countries.[17]

The question that remains in front us is where do we move on from here? More specifically, where can the Germans move from here on?  Germany must avoid basing its relationship with Turkey on their differences even if they seem insurmountable.

Germany, specifically Merkel, would be well advised to ensure that the new 12-month road laid out by the EU in front of Turkey is not simply an empty promise but a path that leads to the EU. After all, if the President of the European Commission Jean-Claude Juncker can say that an invaded and broken “Ukraine’s place is in Europe” after the recent vote of the Dutch senate, where is Turkey’s place? Furthermore, who is better than Germany, the historic ally of Turkey, to show to the rest of Europeans that Turkey's place is in Europe? In the light of her speech in Munich, it should be expected that Chancellor Angela Merkel should start this process with Turkey for the benefit for the whole of European Union as soon as possible.