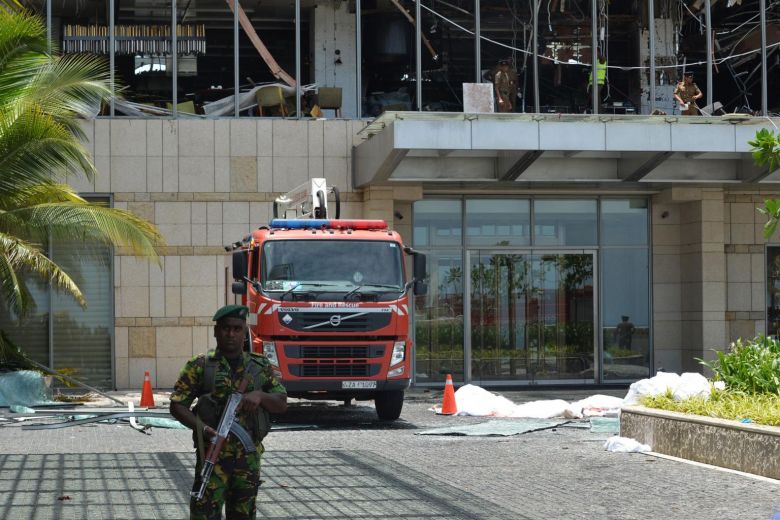 After the heinous terrorist attacks that took place in Sri Lanka on 21 April, an opinion piece with the title "As the Sri Lanka attacks show, Christians worldwide face serious persecution" by Giles Fraser was published in The Guardian newspaper on the same day.[1] The Guardian introduces the author as "a parish priest in Elephant and Castle, south London." In the past, the author had a weekly column in Church Times, an Anglican Christian weekly newspaper based in London.

In the opening short paragraph of his opinion piece, Giles Fraser briefly refers to the terrorist attacks to various churches in Sri Lanka. However, he does not provide any information concerning the history of Christianity in this mainly Buddhist country or the problems faced by Christianity, if any, as a minority religion. He does not give information on the fact that the Christian population of Sri Lanka includes members of both the Sinhalese and Tamil ethnic groups.

Following this short introduction, he mentions a conversation with a known scholar and classicist “about Christian persecution in Roman times” and states that “she [the classicist] was of the opinion that it might not have been quite as big a deal as later Christians made it out to be.” He then makes the ultimate claim of his opinion piece; “We are living though one of the most serious phases of Christian persecution in history, and most people refuse to acknowledge it.”

It is known that the month of April is a period for propagandists and their blindfolded supporters to perform the yearly rituals of repeating their false genocide claims concerning the 1915 Events. Being an “anniversary”,  the month of April provides is a good occasion for propagandists to engage in brainwashing. The main target group of this propaganda is the Christian Western world and their ultimate tool for the propaganda is religion, namely Christianity. The popular enemy groups for these “Christianists” are Turks and Muslims. They use hostility against Turkish and Islamic identity, namely Turcophobia and Islamophobia, as tools for their propaganda efforts fueled by a primitive and destructive revenge mentality.

In his opinion piece, parish priest Fraiser, under the pretext of Sri Lanka terror attacks, adds his voice to this anti-Turkish and anti-Islam choir and claims that “During the past century, Christianity has been all but driven out of the Middle East, the place of its birth.” He, without explaining the legal meaning of “genocide” and mentioning the “Convention on the Prevention and Punishment of the Crime of Genocide” adopted by the General Assembly of the United Nations on 9 December 1948, ignorantly accuses Turkey of committing the crime genocide.

In this context, he also introduces a new book which he notifies will be published in coming days written by two Israeli professors, Benny Morris and Dror Ze’evi from Ben Gurion University of Negev. He states in this respect that “This week, the Israeli historians Benny Morris and Dror Ze’evi will publish a much awaited account of the period. The Thirty-Year Genocide: Turkey’s Destruction of its Christian Minorities argues that from 1894 to 1924, the Turkish authorities systematically murdered some 2.5 million Christians.”

Who are the authors of the book “The Thirty-Year Genocide: Turkey’s Destruction of its Christian Minorities”?

A brief scan of the names of the authors of the said book points out that Benny Morris is an Israeli professor who “identifies himself as a Zionist and supports Zionist actions”.[2] It is reported in the press that Morris, “in a 2004 interview published in Haaretz, justified the ethnic cleansing of Palestinian” known as Nakba (al-Nakbah is disaster or catastrophe) in which more than 700,000 Palestinian Arabs fled or were expelled from their homes.[3] According to the reports, “Morris justified the ethnic cleansing of Palestinians. Invited to reassess those remarks in the latest interview, the historian doubled down. While apparently regretting some of his language, Morris continued to back the population expulsions that took place.”

The Haaretz interview of 2004 with Morris interestingly bears the heading of “Survival of the Fittest”, which is in fact the motto of Eugenics, Social Darwinism and the social theory of the natural selection of human beings. The following passages from this interview explains why the heading of the interview bears a Social Darwinist and Eugenic motto:

“(Ari Shavit, Haaretz Correspondent) Are you saying that Ben-Gurion was personally responsible for a deliberate and systematic policy of mass expulsion?

(Benny Morris) From April 1948, Ben-Gurion is projecting a message of transfer. There is no explicit order of his in writing, there is no orderly comprehensive policy, but there is an atmosphere of [population] transfer. The transfer idea is in the air. The entire leadership understands that this is the idea. The officer corps understands what is required of them. Under Ben-Gurion, a consensus of transfer is created.

(Ari Shavit) Ben-Gurion was a "transferist"?

(Benny Morris) Of course. Ben-Gurion was a transferist. He understood that there could be no Jewish state with a large and hostile Arab minority in its midst. There would be no such state. It would not be able to exist.

(Ari Shavit) I don't hear you condemning him.

It is quite amazing to see that Morris in this interview openly defends ethnic cleansing, forced deportations and relocations for the creation of a Jewish state. The interviewer explains his observations concerning Morris’ mood as follows:

“He doesn't think twice before firing off the sharpest, most shocking statements, which are anything but politically correct. He describes horrific war crimes offhandedly, paints apocalyptic visions with a smile on his lips. He gives the observer the feeling that this agitated individual, who with his own hands opened the Zionist Pandora's box, is still having difficulty coping with what he found in it, still finding it hard to deal with the internal contradictions that are his lot and the lot of us all.”

In this context, I would like to also refer to further explanations of Morris concerning his above-mentioned words on “ethnic cleansing”. His explanation was published in the Haaretz newspaper as well. Relevant parts of the explanation is as follows:

“I do not support the expulsion of Arabs from the territories or from the State of Israel! Such an expulsion would be immoral, and is also unrealistic. What I said was, that if in the future, these communities were to launch massive violence against the State of Israel in combination with a broad assault on Israel by its neighbors, and endanger its survival, expulsions would certainly be in the cards”[5]

This explanation of Morris should be analyzed by the Turkish scholars in the future from the point of view of the relocation of Armenians in the Ottoman Empire due to Armenian revolutionary committees’ rebellion against the government and their cooperation with the invaders of the country during the First World War that presented a life-or-death moment for the Turkish people. Furthermore, unlike the Israeli case, there was no deportation and the Ottoman government envisioned the relocation of its Armenian population as a temporary measure and provided the legal and administrative opportunity for the Armenians to return to their homes once the security risk borne out of the war would subside. In this context, the preparation of this book by an openly remorseless and discriminatory individual such as Morris takes on a comical aspect.

When will the book be published and by whom?

“A reappraisal of the giant massacres perpetrated by the Ottoman Empire, and then the Turkish Republic, against their Christian minorities.

Between 1894 and 1924, three waves of violence swept across Anatolia, targeting the region’s Christian minorities, who had previously accounted for 20 percent of the population. By 1924, the Armenians, Assyrians, and Greeks had been reduced to 2 percent. Most historians have treated these waves as distinct, isolated events, and successive Turkish governments presented them as an unfortunate sequence of accidents. The Thirty-Year Genocide is the first account to show that the three were actually part of a single, continuing, and intentional effort to wipe out Anatolia’s Christian population.”

As it was explained in the AVİM analysis titled “Rising Islamophobia in the Western World and the Turkish-Armenian Controversy,”[7] religion plays an important role in the 1915 Events and the related Turkish-Armenian controversy. It was stated in this respect that;

The opinion piece of Giles Fraiser in The Guardian is an example of this mindset in the Western Christian world. In this case, we also witness a Judeo-Christian dimension by the involvement of the new book by two Israeli professors. It is most probable that Fraiser’s Jewish roots[9] and his new family ties contribute to the emergence of this new dimension. Bigotry has brought evil rather than goodness to humanity in the past. Humanity has experienced the destruction of the Crusades. We must resolutely stand against those people who want to carry the mentality of those destructions to our present time.