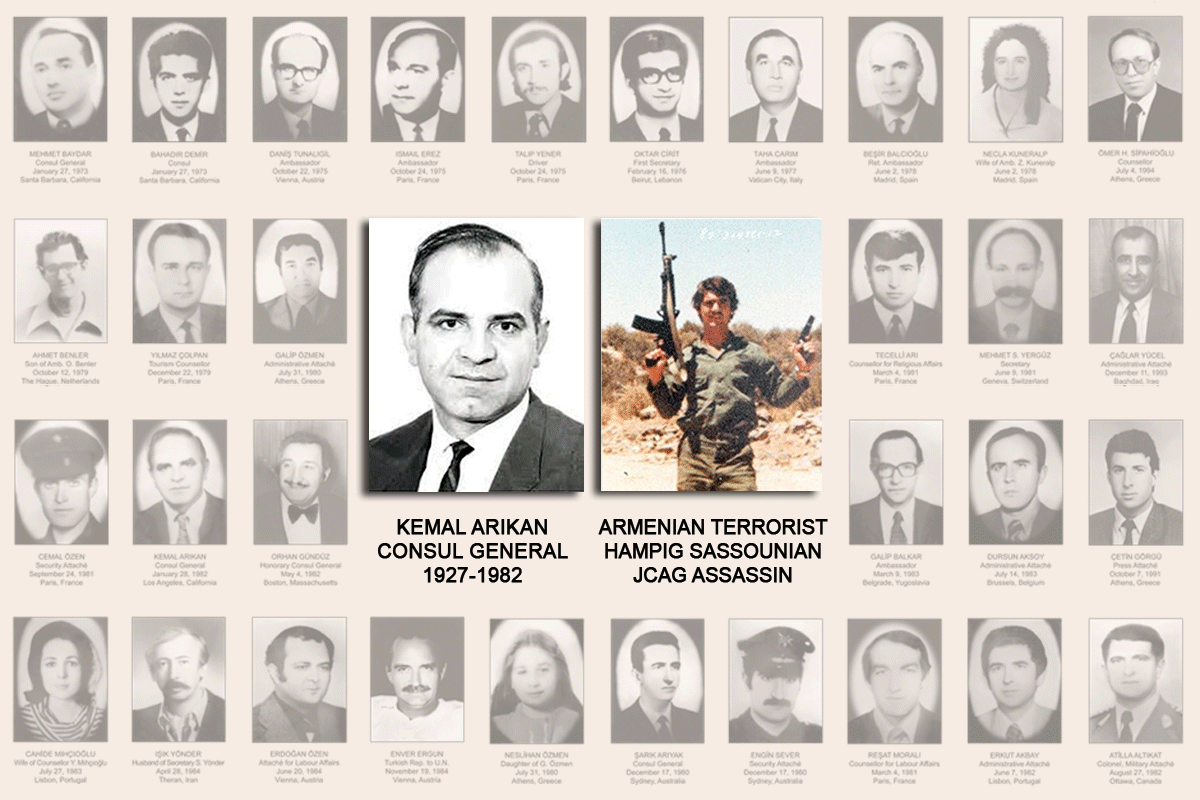 On 28 January 1982, Consul General of the Republic of Turkey in Los Angeles Kemal Arıkan was assassinated by the crossfire of two terrorists in the morning hours while he was in his vehicle stopping at traffic lights close to his residence. The “Justice Commandos of the Armenian Genocide” (JCAG) claimed responsibility for the assassination.

It is useful to remember the city of Los Angeles city and the state of California at that time. One must recall that the terrorist organization that claimed responsibility for the attack was connected to the Armenian Revolutionary Federation (ARF/Dashnak Party, established in Caucasia in 1890 as a terrorist organization) and was continuing the Dashnak traditions of terrorism. ASALA and JCAG are the terrorist organizations that have committed the most acts of terror against Turkish diplomats and their families. So, what was the source of their audacity? Radical nationalist Armenians being so prevalent and effective, especially in California, goes back to 1979 when a politician of Armenian origin named George Deukmejian became the Attorney General of California[1]. Deukmejian was a powerful political figure who presided over of the state’s prosecutors and police officers. Deukmejian, who was part of the Republican Party, made efforts to become the California Governor and joined the elections as a candidate of the Dashnak Party in California. In a period when radical nationalist Armenians were prevalent in the state, a bomb attack was organized against the residence of our Consul General in Los Angeles Kemal Arıkan in 1980. Similar attacks were conducted against Turkish associations and agencies afterwards. On November 1981, a bomb attack was also carried out against the Ambassador of the Republic of Turkey to Washington Şükrü Elekdağ during his visit to the Consul General in Los Angeles. The Consulate General building of the Republic of Turkey was significantly damaged as a result of the attack[2].

We had written in our previous articles of how Kemal Arıkan emphasized the necessity for taking precautions when asked what it was like to serve in a state where there was a significant Armenian population. Regarding such conditions, the importance of the United Nations Vienna Convention on Diplomatic Relations should come to mind. The 29th Article of the Convention that came into force in 1964 states “The person of a diplomatic agent shall be inviolable. He shall not be liable to any form of arrest or detention. The receiving State shall treat him with due respect and shall take all appropriate steps to prevent any attack on his person, freedom or dignity”[3]. The failure in the implementation of this clear stipulation cost the lives of Consul General Kemal Arıkan and the other members of the Turkish Ministry of Foreign Affairs.

We expressed in our previous articles that the parole of Sassounian depended on the approval of the California Governor. It will be helpful to present a brief history of the demands for Sassounian’s release.

Release hearings had been brought to the agenda seven times since 2006. Demands for release were rejected in the hearings in 2006, 2010, 2013, and 2015. A release order was issued in 2017, however, it was turned down by California Governor Jerry Brown. The demand for release was brought to the agenda once again in 2018, but was rejected. A release order was issued in 2019 as well, but it was rejected by California Governor Gavin Newsom on 25 May 2020. Recently, on 24 February 2021, the Supreme Court of California overturned Governor Newsom’s rejection decision. In this context, it is beneficial to draw attention to the webinar titled “Turkish – American Relations in the American Legal and Political Arenas – Part I” held by AVİM on 10 March 2021. In this webinar, US attorneys David Saltzman and Günay Evinch shared their views in detail on why the terrorist Sassounian must not be released[4].

On 10 March 2021, a very upsetting news report was published. The office of the California Governor Gavin Newsom informed the Armenian National Committee of America-Western Region (ANCA-WR) that the Governor decided to approve of the decision for Hampig Sassounian’s release[5].

In response to this development, the ANCA-WR President Nora Hovsepian expressed that they were truly grateful to Governor Newsom and his team for keeping the lines of communication open with them, for listening to their concerns, and for making the “humanitarian” decision to allow Hampig Sassounian’s release to stand[6].

Regarding the subject, US Secretary of State Antony Blinken stated “We are disappointed by the expected grant of parole in the State of California of convicted murderer Harry Sassounian. Attacking a diplomat is not only a grave crime against an individual, it is an attack on diplomacy itself.” However, it is not sufficient for such a powerful politician in the US administration to express that he is “disappointed” and must implement more effective ways against a decision that gives a green light to terrorism and disregards the law. We believe that the release of the terrorist Sassounian, despite knowing that he does not feel remorse and that he has stated that he would do it again if he could, warrants a greater reaction than disappointment. Such a release constitutes a risky situation not only for Turkey but for the US as well.

It will be useful to remember who Sassounian is, whose release has pleased ANCA-WR. The remorseless terrorist Hampig Sassounian, the murderer of the martyred Consul General Kemal Arıkan, is being portrayed as a hero by the radical nationalist Armenians in California. In fact, during this long process, a fund directed by the Dashnak Party was established for high sums to be collected as donations for Sassounian[7].

During the early years of his conviction, the Armenian Youth Federation (AYF) published letters full of admiration that were written by Armenian children between the ages 8-15.

In 1996, these letters were published in the Armenian newspapers of the US with the title “Letters to Hampig”. The letters sent to Sassounian by the Armenian children in the US were published in the Armenian Weeklynewspaper[8]. In the letters where the Armenian children between the ages 8-15 express their admiration for Sassounian, it is observed that all the children state that they are members of AYF[9]. AYF, which acted as a bridge between Sassounian and the AYF member children, published Sassounian’s message. In his message, Sassounian stated that he is innocent and thanks those who provided financial and psychological support. The crucial part in the message was at the end. He expressed the message to the AYF member children that all the sacrifices they will make towards defending the Armenian claims will be worth it and that they must continue their struggle. It is clear in this message that Sassounian presented terror as sacred and appealing to the Armenian youth.

Sassounian’s release will be the beginning of a new and dangerous process. It must not be forgotten that Sassounian is a terrorist that the Dashnak Party and Diaspora present as someone to be praised and emulated. As such, the issue must not be evaluated on the basis of “Sassounian” alone. There is a greater issue that must be dealt with. As a result of such a decision by the US, which will give the impression that it tolerates Armenian terrorism, especially in a period when ASALA has entered the stage once again and has begun publishing threatening statements in the media after the 2020 Karabakh War, the US will have to share the joint responsibility of any subsequent Armenian terror activities.

[6] “Hampig Sassounian to be Granted Parole”