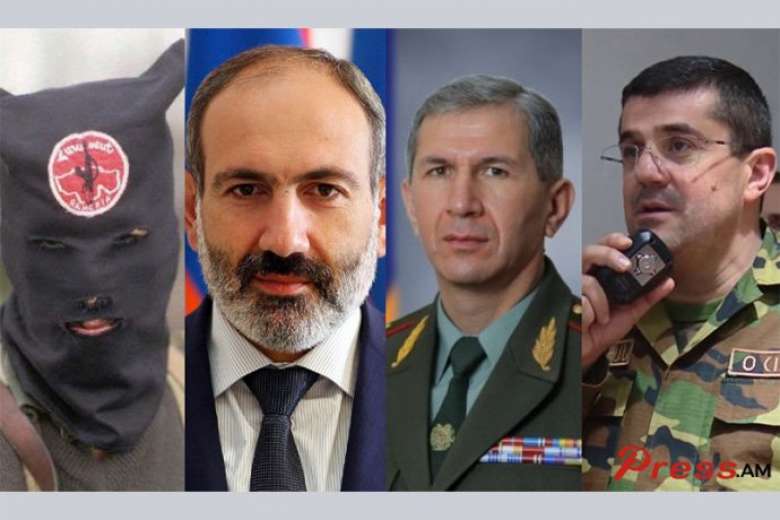 At the beginning of February, we mentioned the last statement published by ASALA and the interview given by ASALA representative Aram Haykazyan at the establishment anniversary ceremony of ASALA[1]. Besides these statements made by ASALA, another previous statement draws attention. This statement is the open letter of the Armenian People's Movement Representative Vazgen Petrosyan, the political wing of ASALA, to Nikol Pashinyan, Arayik Harutyunyan, David Tonoyan, and Onik Gasparyan. This open letter, like other written statements and interviews in this context, have been prepared only in Armenian[2].

In the letter, the defeat of Armenia in the 2020 Karabakh War is heavily criticized. The letter employs extremely unrestrained wording and contains open threats to Armenian politicians and soldiers. It can be seen that the letter also gives some advice on war tactics.

David Tonoyan, who served as the Defense Minister of Armenia between 2018-2020, also has also received his share of criticism in the letter.

Onik Gasparyan, who has been serving as the Chief of General Staff of the Armed Forces of Armenia since 8 June 2020, is another target of the letter.

In the letter, he expresses that the leaders of the country, although they had received information months ago from the General Staff of the Armed Forces of the Republic of Armenia counterintelligence, did not take any action. He states that the Azerbaijanis had been preparing for a large-scale and prolonged war by sending 100,000 soldiers and several thousand military equipment to the border since August 2020. He also indicates that they were informed of a large number of mercenaries being transported from different places to the frontline. In the first item of the letter, as if he is a commander, Petrosyan heavily criticizes the Armenian authorities for their failures.

He questions why they did not act on time despite being aware of the approaching war, seeing the Azerbaijanis conducting military exercises and knowing what weapons they were going to use.

He also criticizes why the Armenian authorities did not take measures despite knowing that Azerbaijan had carried out reconnaissance flights before destroying the Tor-M2KM missile defense system of Armenia on 9 November. It is useful to point out some technical points here. It is known that the aforementioned portable system provides the opportunity to carry out military operations both day and night in all weather conditions[3]. In addition, the system was shipped to Armenia by Russia in 2019[4].

In the letter, David Tonoyan and Onik Gasparyan are asked why relations with strategic partners have deteriorated. Petrosyan indicates in the letter that the only free and reliable exit to the outside world is Iran. He states in the letter that he cannot understand why an embassy was opened in Israel by paying tribute to the United States a few days before the start of the war.

Petrosyan also asks Arayik Harutyunyan why he did not invest in Karabakh’s defense despite having been the so-called head of the state in Karabakh for many years.

In this letter written in anger after the defeat, it is seen that ASALA militant Vazgen Petrosyan has judged Armenian politicians, soldiers, and the so-called president of the occupying regime in Karabakh as if they were in a courtroom. The audacity with which ASALA was able to write such a letter can be explained by the indulgence that has been shown to ASALA in the past. It should be understood with this letter that not only Turkey and global security, but also Armenia’s security is under threat.