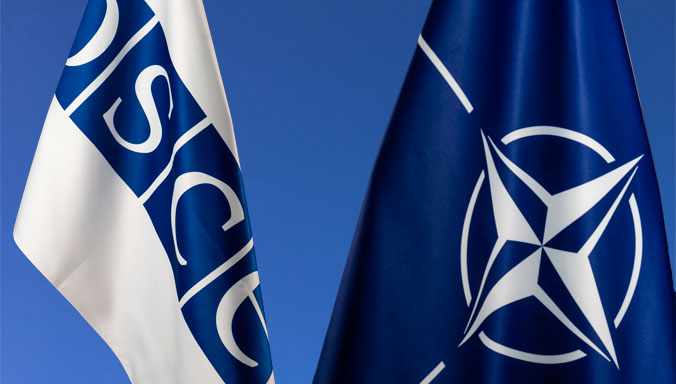 In an interview about two and a half years ago, French President Emmanuel Macron arrogantly claimed that NATO was brain dead and Europe was on the edge of the precipice, and he assertively questioned NATO's very future.[1] Besides, he also mentioned his long-time dream of developing a European military force corresponding to the same period.[2] This European military force is, in fact, the hypothetical joint Franco-German European army that France and Germany announced during the signing of a new "Treaty on Franco-German Cooperation and Integration" in Aachen on January 22, 2019. [3]

In the meantime, a lot of water has flowed under the bridge since 2019. The intervention, which the Russian Federation initiated under a special military operation towards Ukraine and which turned into a full-fledged war in fifteen days, revealed how empty are the words Macron made for NATO two and a half years ago. Elapsed time also proved that Macron’s rhetoric about establishing a European Army is only wishful thinking. The war in Ukraine has caused grave concern in the Nordic countries. Certain EU member Nordic countries, which are very keen to preach lessons and to show the right way like teachers to non-EU European countries, including Turkey, on many subjects at every opportunity, this time began to see themselves in an imminent security threat. For example, according to a Deutsche Welle  (DW) report, Sweden and Finland have stayed out of NATO due to their military nonalignment policy supported in the past by majorities of both Finns and Swedes now seem to change their policy due to war in Ukraine.[4] As per the DW report, the shift in opinion is especially dramatic in Finland, and for the first time in its history, a majority of Finns are in favor of joining NATO. In this context., it is reported that nowadays, 53% Finnish population is in favor of joining NATO. It is stated that this rate was 19% in 2017. DW report also points to the development that the approval rate of NATO membership in Sweden rose to 41% in 2022 from 32% in 2017. These developments indicate that NATO, contrary to Macron's claims, is not in danger of brain death and is seen as the most reliable defence organization for some EU member states with the highest welfare level. It seems possible that the EU will become much more in need of the NATO security umbrella in the coming period. These developments show us that security can be provided not with rhetoric but with reliable and powerful defence forces.

On the other hand, these days, when a serious war situation is taking place right next to Turkey, it is believed that it would be beneficial to go back to the past and to remember the principle of "indivisibility of security" developed by the Conference/Organization for Security and Cooperation in Europe (CSCE/OSCE) and to explain the essence of this principle to the younger generations. In the 1975 Helsinki Final Act of the CSCE, the participating States recognized the indivisibility of security in Europe. In this respect, the fifth introductory paragraph of the Act states that “Recognizing the indivisibility of security in Europe as well as their common interest in the development of cooperation throughout Europe and among selves and expressing their intention to pursue efforts accordingly.”[5] By “indivisible security” it was meant that the security of each state of CSCE region is inextricably linked with the security of every other state. Another way of putting this would be: Co-operation is beneficial to all participating States, while the insecurity in or of one participating State can affect the well-being of all.[6] Furthermore, the 1990 Charter of Paris for a New Europe declared that “security is indivisible and the security of every participating State is inseparably linked to that of all the others.”[7]

In the context of CSCE/OSCE, the most evolved form of studies and negotiations on developing security and cooperation in Europe was reached in Istanbul at the dawn of the twenty-first century. At the OSCE Istanbul summit in November 1999, the leaders of fifty-four states participating in the OSCE signed the Charter for European Security called the “İstanbul Document.” Paragraph eight of the Charter for European Security involves one of the crucial principles for the security and stability of Europe in the twenty-first century.[8] The paragraph (p.3) reads as follows:

“8. Each participating State has an equal right to security. We reaffirm the inherent right of each and every participating State to be free to choose or change its security arrangements, including treaties of alliance, as they evolve. Each State also has the right to neutrality. Each participating State will respect the rights of all others in these regards. They will not strengthen their security at the expense of the security of other States. Within the OSCE, no State, group of States or organization can have any pre-eminent responsibility for maintaining peace and stability in the OSCE area or can consider any part of the OSCE area as its sphere of influence.”

The reason for the war situation that Europe is facing in Ukraine today is that the Russian Federation and some countries in the Western bloc consider this paragraph in terms of their priorities. The parties cannot achieve everything they want in the negotiations to ensure security, stability, peace, and cooperation among fifty-four countries. If the outcome of the negotiation is to reflect a consensus, the negotiating parties must strike a reasonable balance that reflects their priorities as much as possible. Paragraph eight of the above-mentioned Charter reflects such a balance. In order to find a solution to the war situation we face today in Ukraine, the constructive negotiation spirit of the period when the 1999 Istanbul Document was prepared must be returned. In our judgment, Turkey, in current circumstances, is one of the most appropriate OSCE countries that can best prepare the suitable ground for a revival of such constructive spirit in the new negotiations.