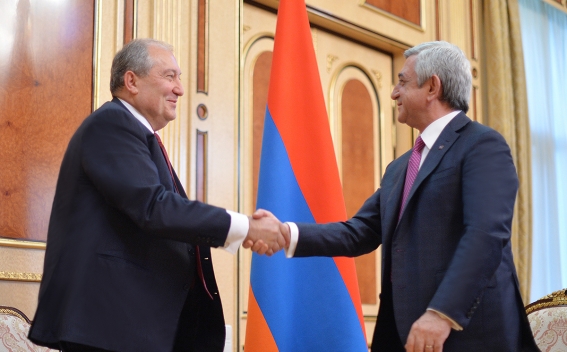 On 9 April 2018, Armen Sarkissian assumed the office of the President of the Republic of Armenia (RA) after taking the oath of office at the RA National Assembly special sitting.[1] By that, A. Sarkissian became the fourth president of the RA. Yet, the nature of A. Sarkissian’s presidency by no means corresponds to those of his predecessors. His three predecessors, namely, Levon Ter Petrosyan (1991-1998), Robert Kocharyan (1998-2008) and Serzh Sargsyan (2008-2018) held the presidential post while Armenia was being governed by a presidential system. By the December 2015 constitutional amendments, the country’s system of government was changed into parliamentarism. Accordingly, the fourth Armenian president A. Sarkissian became the first president of the parliamentarian Armenia with much fewer powers compared to his predecessors. Under the new parliamentary system, the president has no veto powers and his post is essentially symbolic.

In fact, in the parliamentarian Armenia, the PM will be at the top of the executive, which is a post that is analogous with the presidency in the former presidential Armenia. Therefore, in Armenia the burning question is who will become the new PM, hence the top of the executive. The exact answer of this burning question will be known by 17 April, when the Armenian parliament will elect the new PM. Yet, even today we can readily assert two possibilities that defy a third one. One possibility is that a close associate of the former president and the leader of the Republican Party of Armenia Serzh Sargsyan, either RA Defense Minister Vigen Sargsyan or the former prime minister  Karen Karapetian, will become the new PM. The second possibility is that the former president S. Sargsyan, himself, will assume the post. If I had to guess, I would bet on the latter possibility.

Brief Overview of Armenia’s Transition from Presidentialism to Parliamentarism

When Armenia gained its independence following the disintegration of the USSR in 1991, it adopted a strong-presidential system, despite the criticisms of those who advocated for parliamentarism. Whereas pro-parliamentarists argued that presidentialism was incompatible with democratization, the then president Levon Ter Petrosyan objected to those arguments by asserting that the tangible circumstances of post-Soviet economic and political transitions and the Karabakh conflict necessitated a strong leadership. Eventually, the 1995 constitution established a strong-presidential system in Armenia. In 1998, Robert Kocharyan replaced Ter Petrosyan. During his term of office, the constitution was amended in 2005. However, instead of parliamentarism, a semi-presidentalism was established. In 2015, the constitution was once again amended by the initiative of the third Armenian president S. Sargsyan to change the system of government into parliamentarism. During that period, S. Sargsyan put forward the argument of democratization to legitimize the change. However, the opposition reacted to that move by arguing that S. Sargsyan was in truth not concerned with democratization, but with holding on to his power. They claimed that S. Sargsyan wanted to amend the constitution and establish parliamentarism because he could not run for the third time for presidency due to the limits imposed by the existing constitution. They sustained that S. Sargsyan’s goal was to continue his hold of power by becoming the PM in the new parliamentarian Armenia. Others argued that S. Sargsyan wanted to de facto remain in power by pulling the strings of the new PM using his position as the leader of the RPA. There were also those claiming that the “RPA clan” wanted to hold onto the power as a “collectivity” in the parliamentary system.

When these arguments were being hotly debated in Armenia, on 10 April 2014, S. Sargsyan outright rejected any prospect of running for the PM once the parliamentary system would be established with the following words: “I, Serzh Sarkisian, officially declare that I will never again run for the post of president of the Republic of Armenia.” He added:

If as a result of final discussions [on constitutional reform] a path not corresponding to my wish is chosen -- I mean the parliamentary model of governance -- then I will also not aspire to the post of prime minister…I believe that one person must not aspire to the reins of power in Armenia for more than twice in a lifetime.[2]

Eventually, the constitution was amended by the referendum conducted on 7 December 2015 at which 63% of the voters supported constitutional changes with a 51% turnout.[3]

Following the constitutional amendment, on 2 April 2017 parliamentary elections were held in Armenia at which S. Sargsyan’s RPA won 58 of the 105 seats in the parliament.[4] This parliament elected A. Sarkissian as the president on 2 March 2018. A. Sarkissian took his oath of office on 9 April 2018.

Between 9 and 16 April, candidates for the PM will throw their hats in the ring and on 17 April, the parliament will choose the next prime minister, who will be the top of the executive in Armenia.

On 19 March 2018, S. Sargsyan gave an interview to a media outlet in Armenia. In this interview, he hinted that he might have changed his mind about not running for the post of the PM, if he ever was honest about his initial declaration.

In this interview S. Sargsyan touched upon the Karabakh conflict and the related highly tense political atmosphere in the South Caucasus, which is, S. Sargsyan claimed, fundamentally different from the situation in April 2014. He stated:

I still do not aspire to the post of prime minister…But I have never regarded myself as someone who is guided by prejudice or rigid thinking. I cannot fail to reckon with the reality and think that I bear no responsibility for the future and our country’s smooth course.[5]

On 7 April, S. Sargsyan at a meeting with outgoing prime minister stated that “our party will face the task of developing the country by 2022; I mean first of all me, as the leader of the party.”[6]

In the meantime, in a move that will surely raise more than a few eyebrows, the presidential palace in Yerevan where S. Sargsyan has been residing for ten years was turned into the PM’s office.[7]

On 9 April 2018, A. Sarkissian, the President-elect, at a meeting with S.Sargsyan before the inauguration ceremony said that he “look[s] forward to working closely with [S.Sargsyan] for many years ahead.” [8]

Certainly, one may expect public protests against S. Sargsyan’s nomination for the post of the PM. However, such probable protests are not likely to be strong enough to force S. Sargsyan to step back. This is evidenced by the fact that the oppositional Yelq bloc in the Armenian parliament, which holds nine seats, has split apart over the proposal to organize protests against S. Sargsyan’s candidacy. Other circles also show no sign of readiness to hold large public protests.[9]

All of these are strong hints that it is very probable that on 17 April S. Sargsyan will become the new PM of Armenia, which means that he will continue to hold onto power with his third term in office, albeit in a changed form.

[7] Grigor Atanesian, “As Armenia effects its political transition, all eyes on Sargsyan”

[9] Grigor Atanesian, “As Armenia Effects its Political Transition, All Eyes on Sargsyan”