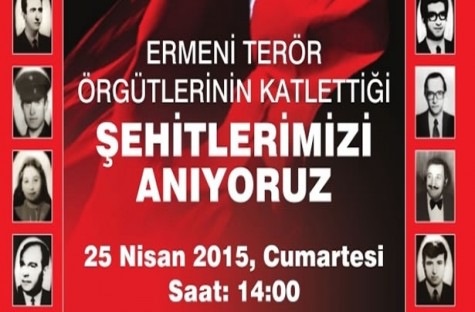 (ON THE TURKISH DIPLOMATS ASSASSINATED BY ARMENIAN

RADICALS AND TERRORIST ORGANISATIONS BETWEEN 1973-1985)

We still carry in our hearts the agony of the ruthless assassination of over 40 Turkish diplomats, government employees and their family members by Armenian terrorist organizations between 1973 and 1985.

No other country in the world has lost this many of their diplomats and government officials to terror in such a short span of time.

Unfortunately, this period of violence was not unique in our past.  Since the mid-1850s, we have been the victims of inhumane acts carried out by Armenian fanatics.

We are fully aware of the motives and aims of such atrocities. We also firmly believe that these goals are still being pursued by the Armenian organizations responsible for the terror campaigns of the 1970s and 1980s:

· The Turkish people, while mourning their losses caused by Armenian gangs and militia who were cooperating with foreign occupation forces at the time, are not insensitive towards the unfortunate Armenian losses during the relocation.  We cannot however, accept one-sided narratives. Recent archival research and historical evidence have proved that the difficult decision of the Ottoman Government that was made amid the World War I conditions,  to relocate parts of its Armenian citizens from Eastern Anatolia to other regions of the Empire, does not constitute a “genocide”. The Armenian side is now concerned that the fallacy of their spurious allegations, based primarily on fictional war propaganda and fabricated evidence from the start, will now be exposed to the international community, in the light of these new findings.

· Every possible disingenuous method, including the distortion of historical facts and the exploitation of political interests and of humanitarian sentiments, is being deployed in order to revive the “Armenian Question”, which was used in the last century by the Great Powers to attain their imperialistic goals in the region. More recently, the Armenian issue was revived in foreign public opinion, primarily by murdering Turkish diplomats, as a final means to destabilize and divide Turkey.

· Today, these efforts are mobilized to turn Western public opinion against Turkey, even at the cost of restrictions imposed on the freedom of speech and thought, both in Turkey and in their own societies. Academics of dubious credentials are encouraged or commissioned to rewrite our history based on questionable sources, assumptions and prejudices, rather than through the use of genuine archival evidence and unbiased analysis, with the opening of all relevant archives to research.  Unfortunately, resorting to terror, which is prohibited by all religions and declared as illegitimate by all international documents, is made an instrument of this process.

· The existence of these motives and goals has been confirmed even by some Armenian authors and verified by the statements of the criminals involved in the assassinations themselves. The words uttered in 1973 in Los Angeles by Gourgen Yanikian, who viciously ambushed and murdered our dear colleagues Mehmet Baydar and Bahadir Demir, is a solid example of this reality: “I will set an example with this action of mine” (…for the Armenian youth), thereby triggering the oncoming wave of terrorism based on the Armenian narrative.

This behaviour, the product of a distorted mindset, is supported by those who are unable to detach themselves from a disgraceful anti-Turkish and anti-Muslim propaganda spread throughout the West in the mid-19th century. Now the latest trend is the canonisation by political edicts of the false allegations, even as they are contradicted by documentary evidence.

The Armenian allegations and fanatical activities do not originate solely from the primitive and groundless desires for vengeance that cost the lives of not only innocent Turkish officials, but also of the random victims of many other nationalities, killed during the indiscriminate Armenian terrorist attacks at Ankara Esenboga Airport, Istanbul Grand Bazaar (Kapaliçarsi) and Paris Orly Airport.

Even though it is not always openly acknowledged or emphasized, the real aim behind these attacks is to create a feeling of guilt among the Turkish people and to force us to accept the events of 1915 as a “genocide”, in order to prepare the ground for the revival of the demands for financial and territorial compensation, particularly the land promised to them by the imperialist powers of the time in still-born treaties, an impossible dream to achieve even during those problematic years following World War I.

Although the Republic of Turkey has stretched out its hand of friendship in good faith, the inconsistent pretexts and negative responses put forward by the Republic of Armenia and its obsessively prejudiced attitude toward the historical truth do not leave room for meaningful alternatives. There can be no other conclusion than the reaffirmation that the dominant Armenian position has neither given up nor changed its original ambitions and vindictive tactics.

The commemoration ceremonies held on the date of April 24 by the Armenian side has no relevance to the relocation decision; they have unfortunately transformed their commemoration to an occasion to slander Turks and Turkish history, which does not go beyond hostile propaganda. But they are carried out by the very ones who do not have the courage to agree that it is necessary to examine this period of history by a joint committee of historians, with the participation of unbiased third party experts.

We did not forget our martyrs; we feel it our duty to remind our people of the motives which caused their sacrifices, and commemorate the events for the future generations.

As we renew our condolences to their surviving family members, may God’s mercy be upon them.

To commemorate them once again in unison with our Nation and in order to be able be bring the basic facts on the matter to the attention of our all-along sensitive public, we, the retired members of the Ministry of Foreign Affairs, shall organize a march on Saturday, April 25, 2015, in Ankara, at 14.00 hours.

RETIRED AMBASSADORS AND OTHER RETIRED OFFICIALS

OF THE MINISTRY OF FOREIGN AFFAIRS

OF THE REPUBLIC OF TURKEY