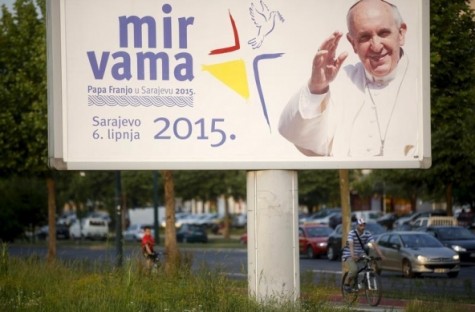 Roman Catholic Church’s spiritual and temporal leader Pope Francis made an official visit to Bosnia & Herzegovina on 6 June. The Holy Father made a number of formal meetings, emphasized the importance of Bosnia & Herzegovina for the world and specifically for Europe, and made a call for peace.

However, he failed to do something that carries great emotional importance for the people of Bosnia & Herzegovina: he did not in any way mention the Srebrenica Genocide – the massacres at Srebrenica which the International Criminal Tribunal for the Former Yugoslavia (established by the decision of the United Nations Security Council) ruled to have constituted a genocide. The family members of the Srebrenica victims and the head of the Islamic Community in Bosnia and Herzegovina Husein Kavazović called upon the Pope to mention the Srebrenica Genocide. Despite their calls, and despite its veracity having been put forth by a competent tribunal, Pope Francis chose not to mention the genocide.

Yet, in a liturgy he conducted on 12 April at the Vatican,[i]  Pope Francis implied that the Events of 1915 were genocide despite this being a highly contentious issue and despite the lack of a ruling on this issue by a competent tribunal. During this liturgy, the Pope referred to the Srebrenica Genocide simply as a “mass killing”. It is known that the lobbying efforts done by Armenia, the Armenian diaspora, and the Armenian Apostolic Church were effective in influencing the Pope’s approach to the issues he mentioned during the liturgy.

Pope Francis’ contradictory stance with regards to issues about the genocide term is not only limited to this. During the said liturgy, the Pope implied that the Events of 1915 were “the first genocide of the 20th century”. By doing so, he glossed over the massacres committed in 1904-1908 against the Herero and Nama tribes by the German imperialist forces in German Southwest Africa (today’s Namibia), massacres which the people of Namibia characterize as genocide.[ii] Unhesitant in characterizing contentious historical events as genocide, Pope Francis put aside the events that occurred in 1904-1908, and chose characterize the Events of 1915 as the first genocide of the 20th century.

When one analyzes both the things that the Pope does and does not mention, one can see that he is employing a double standard. In terms of historical events, Pope Francis employs a selective discourse that differentiates between Christians and Muslims.

The massacres in 1904-1908 against the Herero and Nama tribes were perpetrated by German military forces by the orders of the colonial German administration of the German Southwest Africa. The massacres that took place in Srebrenica – which indisputably constituted genocide – were perpetrated by paramilitary Serbian forces. Both of the perpetrator groups possessed a Christian identity. Pope Francis cast aside these two cases of massacres – one which is claimed to be a genocide, the other which is indisputably a genocide - perpetrated by these two Christian groups. In place of this, he sifted through the Events of 1915 – in which both Muslims and Christians suffered many casualties – and singled out Armenians’ claims to imply that these events were a genocide.

This double standard that is being employed is not fitting of Pope Francis – the spiritual leader of the Roman Catholic Church who emphasizes inter-religion dialogue, defends the alliance of civilizations, espouses universal love – and goes against the discourse he puts forth in general.

This double standard will serve nothing more than to create polarization between Muslims and Christians. It is clear that such a stance is not in any way a constructive one.  We hope that Pope Francis does not commit these errors on purpose and that he refrains from doing so in the future.

* The photo was taken by Reuters news agency