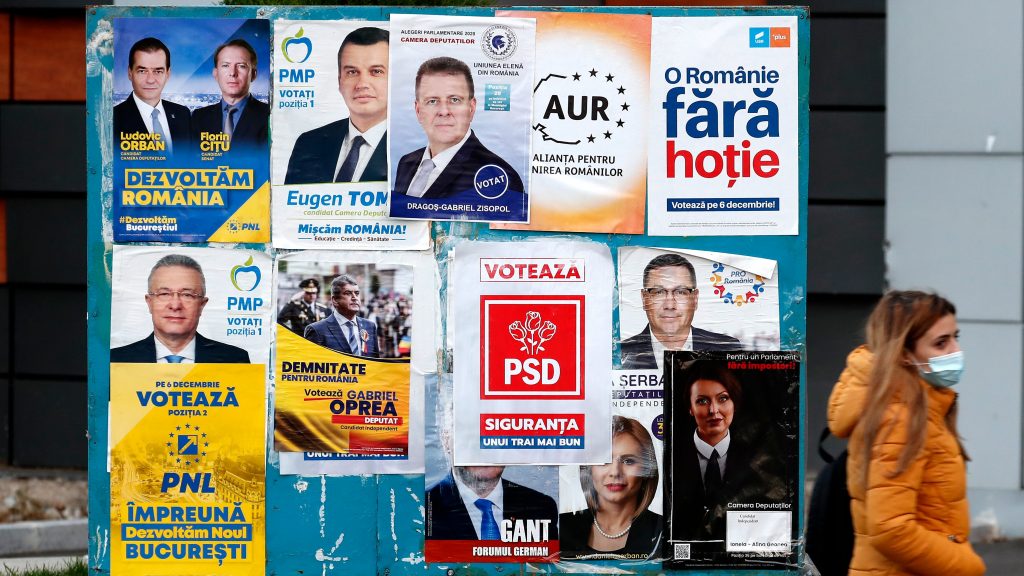 Following the legislative elections on 6 December 2020, a new three-party coalition government was formed in Romania on 28 December. As such, the beginning of 2021 coincided with a new beginning in the Romanian political sphere.

The Covid-19 pandemic, the frustration with the government’s competence to deal with the pandemic, the ill-functioning of the health system, and economic difficulties amplified by the pandemic have set the context in which the elections were held. Accordingly, these issues had been the topics of political debates in the country. In addition, corruption, too, had been a major subject during the election process.

Twenty three parties and also independent candidates joined the electoral race. However, only five parties/alliances surpassed the 5% threshold to be represented in the parliament. Other parties, except for the two, won a little more or less than 1%. In fact, the race was rather between the Social Democratic Party (Partidul Social Democrat; PSD) and the anti-PSD center and center right parties.

PSD, employing a left-leaning rhetoric, is one of the dominant parties in post-communist Romania. Nonetheless, PSD is widely viewed as the main curators of the chronic corruption in the country. In fact, after winning the 2016 legislative elections, in October 2019, PSD government was toppled by a vote of non-confidence on charges about corruption and the introduction of controversial justice reform that was heavily criticized also by the Venice Commission, as an act that opened way to the infringement of the rule of law in Romania.

The other major competitor was the National Liberal Party (Partidul Național Liberal; PNL), a center-right conservative-liberal party. PNL has been governing Romania since the fall of the PSD government in October 2019. The other parties/alliances that passed the 5% threshold are 2020 USR-PLUS Alliance (Alianța 2020 USR-PLUS; USR-Plus), a politically neutral anti-corruption/pro-reform alliance formed in 2019; Alliance for the Unity of Romanians (Alianța pentru Unirea Românilor; AUR), an ultra-right, conservative, xenophobic, anti-EU party; and   Democratic Alliance of Hungarians in Romania (Uniunea Democrată Maghiară din România; UDMR), an ethnic Hungarian party as the name demonstrates. It should be reminded that the PNL and the USR-Plus are staunchly anti-PSD forces.

The vote count revealed that PSD won 28.9% of the votes, whereas PNL, USR-Plus, AUR, and UDMR gained %25.2, %15.4, %9.1, and %5.7 respectively. Although PSD became the first party in the electoral race, it fell short to secure enough seats in the parliament to form a government or to nominate the PM. Because PNL and USR-Plus rejected any prospect of forming a coalition with the PDS, and the PNL-affiliated Romanian President Klaus Iohannis refused to authorize a PDS member as the PM, negotiations to form a coalition government excluding PDS began. After weeks of negotiations, eventually, a coalition government was formed between PNL, USP-Plus, and UDMR.

Number-wise the new coalition government rests on a safe ground. Three coalition partners together have 244 seats in the parliament that coincides with %55 of the total. As mentioned above, President Klaus Iohannis is a PNL-affiliated figure. Therefore, the coalition will not face serious challenges in the parliament or from the president. Certainly, sustaining the harmony within the coalition will be an important determinant. As to that, it should be reminded that in Romania coalitions often fall into internal disputes.

After briefly depicting the Romanian political scene, it may be wise to elaborate on some eye-catching issues that the elections and their aftermath disclose. First of all, the very low voter turnout that is recorded as somewhere between 31.8% and 33.3% (different sources give different percentages) should be underscored. This is a problematically low voter turnout. It is also a record-low voter turnout in post-communist Romania, where the average voter turnout is 51%. In 2016 legislative elections voter turnout was 39.4%, still too low but 6.1%-7.6% higher than 2020.

Commentators relate the low voter turnout with the Covid-19 pandemic, which may be true. However, the Covid-19 pandemic is only a partial explanation given that in other Balkan and Eastern European countries, the voter turnout in the 2020 elections were significantly higher than that in Romania. Accordingly, the low voter turnout should be explained with the indifference of the Romanians with politics. This may have two reasons; Romanians are either very much satisfied with what is going on in the country and trust the political class so that they do not feel a need to go to polls to choose one party or the other, or they are very much dissatisfied and hopeless with the politics, raising apathy towards politics. Obviously, the second alternative is closer to the Romanian reality.

Comparing the votes in 2020 and 2016 probably shows some of the political trends in the country.

As the above table demonstrates, although PSD became the first party in 2020, it lost more than 15% in the last four years. On the contrary, PNL and USR-Plus increased their votes. This reveals the rise of centrist and center-right political forces vis-à-vis the left. Having said that, the fact that only one third of the Romanian electorate went to polls should be taken into account before jumping into plain conclusions. What can be said more securely is that not the center/center right but political apathy is the ‘rising star’ in the country.

Another development that should attract attention, and probably raise eyebrows, is the 9.1% that AUR gained. Founded in December 2019, AUR is a nationalist, conservative, xenophobic, homophobic, anti-Semitic, anti-globalist, anti-EU, in brief, ultra-right political alliance. It advocates unification with Moldova. The fact that AUR gained almost one tenth of the votes should be taken seriously.

Most probably, it would not be an over-interpretation to relate the rise of ultra-right in Romania with the rise of political despair. Besides that, it should also be underlined that the rise of (radical) right is a trend in Eastern Europe, meaning that Romania is not a unique case. Whatsoever, if the rise of the ultra-right continues in Romania, we may expect to see challenging developments both within Romania with several ethnic minorities, the largest of which is the Hungarians, and in the international domain between Romania on the one hand, and Hungary, Ukraine, Russia, in particular, on the other.

As to the short and mid-term prospects, it seems that economy will be the biggest issue in Romania in the coming days, and it will be the number one item and challenge for the new government. As a matter of fact, economic initiatives particularly targeting GDP budget deficit were announced as soon as the government was formed. It will be interesting to observe how successful Romania will be in that domain in the coming days.