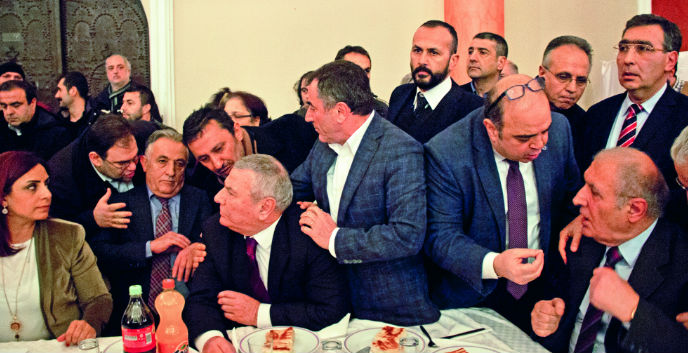 The Head of the Clerical Council of the Armenian Patriarchate of Istanbul Bishop Sahak Mashalyan’s announcement on 13 February that he was resigning from his position further intensified the already heated dispute present amongst the Armenian community of Turkey over the election of a new patriarch.[1] In order to understand this dispute that, on the surface, look rather complicated, we must delve in the root cause of this issue.

A serious disagreement has erupted amongst the Armenian community of Turkey about how a new patriarch is to be elected ever since 2008 when the Armenian Patriarch of Istanbul Mesrob II Mutafyan became unable to fulfill his duties due to his illness. During this process, as a sort of midway solution, Archbishop Aram Ateshian was appointed in 2010 as the General Vicar (Acting Patriarch) of the Armenian Patriarchate of Istanbul. On November 2016, the Clerical General Assembly of the Patriarchate convened, and announced that it had decided to retire Mesrob II and to hold a patriarch election. The dispute amongst the Armenian community continued on without subsiding despite this decision. At this stage, the dispute has two main focus points;

1) Aram Ateshian continuing his post as the General Vicar until the election of a new patriarch. A part of the Armenian community, arguing that this post is incompatible with the traditions of the Armenian Patriarchate of Istanbul, wants this post to be abolished.  However, beyond the “incompatible with traditions” objection, there is a political dimension to the objection raised against Ateshian. Throughout his tenure, Ateshian objected to the Armenian community being turned into a tool in the highly-politicized dispute over the 1915 events.[2] As in, Ateshian objected to this community being abused for political machinations. The discomfort some groups felt towards this prudent stance of Ateshian has caused criticisms towards his post.

While the dispute continued on, Head of the Clerical Council of the Armenian Patriarchate of Istanbul Bishop Sahak Mashalyan, whose name has been mentioned as a patriarch candidate and who is kept at the forefront by groups opposing Ateshian, announced through a letter published on 13 February that he was resigning from his position and that he would not become a patriarch candidate.[3] In his very strongly worded letter, Mashalyan heavily criticized Ateshian, the Patriarchate and the Armenian community for the still unresolved issue of the patriarch election, and expressed that he felt nauseated by the condition the Patriarchate and the Armenian community had fallen into due to the issue of the patriarch election. It is not possible to know to what extent the accusations hurled by Mashalyan in his letter reflect the truth. The possibility that Mashalyan penned his letter in anger felt over his inability to acquire a favorable position for the upcoming election (despite being constantly brought to the forefront) cannot be overlooked. Indeed, while the anti-Ateshian section of the Armenian community (lead in Turkey by the Agos newspaper) considered Mashalyan’s resignation to be courageous, another section considered his resignation, the way in which he resigned, and the derogatory words he employed while resigning to be inappropriate.[4]

Mashalyan’s resignation served only to further intensify the ongoing dispute over the patriarch election, and led to the holding of contradictory meetings within the same timeframe.

On 16 February, 13 officials, amongst which were Aram Ateshian and Sahak Mashalyan (despite the fact that he announced that he had resigned), held a meeting and prepared a protocol concerning the patriarch election.[5] According to the protocol, Ateshian would continue to serve as the General Vicar until the patriarch election. It was foreseen in the protocol that the election would be held on 28 May. It should be noted here that no official permission has been received for such a date. However, Mashalyan indicated in his letter that a leading figure of the Armenian community had discussed the issue of the patriarch election with President of Turkey Recep Tayyip Erdoğan. Mashalyan stated that, during the meeting, it was indicated that the issue of the patriarch election would be handled after the conclusion of the referendum on the proposed changes to the Turkish constitution, which is planned to be held in April.[6]

Within the same timeframe as the 13-person meeting, the Armenian community held another meeting with wider participation over the issue of the patriarch election. The attendees of this larger meeting expressed complaint by indicating that the people who had signed the protocol had previously organized a meeting without the knowledge of the attendees of the larger meeting. During the larger meeting, heated arguments turned into brawls over these contradictory conducts displayed amongst the Armenian community.[7]

When one looks at what is being written in the Armenian media both in Turkey and abroad, it becomes apparent that the patriarch election has ceased to be a spiritual issue, and has instead turned into a political struggle and a tug-of-war that leads to arguments involving brawls.

On top of all of these, the spiritual leader of the Armenian Catholicosate of Etchmiadzin (a town close to Yerevan) Karekin II made an outside intervention in the patriarch election dispute. Arguing that the 16 February protocol is against procedure, he invited those whose names have been mentioned in the upcoming patriarch election to Etchmiadzin for consultations: Aram Ateshian, Archbishop Karekin Bekchian (the spiritual leader of the Armenian community in Germany) and Sahak Mashalyan (despite the fact that he had announced that he would not be a candidate).[8] Another candidate, Archbishop Sebouh Chouljian (spiritual leader of the Gugark region of Armenia) will probably be present during the consultation as well. [Update: according to recent news, Karekin II indeed held consultations with all four candidates]. It must be noted here that the four main centers of the Armenian Apostolic Church (the Armenian Patriarchate of Istanbul is one of these centers) are administratively independent. In other words, the Armenian Patriarchate of Istanbul holds patriarch elections independently and is not obligated to receive directives from the other parts of the Armenian Apostolic Church on such matters. As such, Karekin II made a call that exceeded his authority and intervened in the internal affairs of an independent institution. Indeed, while Aram Ateshian accepted Karekin II’s invitation, the Armenian Patriarchate of Istanbul made the following statement prior to Ateshian's visit to Etchmiadzin;

Armenian Patriarchate of Istanbul is administratively autonomous. Thus, it is clear that the process of election cannot be directed outside of our Patriarchate. In this regard, there cannot be any instruction.[9]

On the other hand, Catholicos of Etchmiadzin Karekin II’s invitation towards the General Vicar of Istanbul Ateshian should be questioned. This is so because Ateshian was subjected to a smear campaign (instigated in Turkey, among others, by Agos newspapers) and was branded as a traitor due his objection to the resolution passed by the German Federal Assembly characterizing the 1915 events as genocide and his subsequent penning of a letter on this regard addressed to President of Turkey Mr. Erdoğan. Shunned by Karekin II, Ateshian was not invited to the ceremony that was conducted during Pope Francis of the Roman Catholic Church’s visit to Armenia in June 2016. As such, Ateshian could have expressed his reaction for being shunned in such a way by notifying that he did not accept Karekin II’s invitation. Such a reaction by Ateshian would not have been unprecedented, since in the recent past, there have been incidents during which disputes have erupted between Church officials and public reactions have been put forth. Armenian Patriarch of Jerusalem Nourhan Manougian’s publicly known grave accusations against Karekin II and his stern stance towards Karekin II is an example for such incidents.[10]

It has been reported that the meeting in Etchmiadzin between Karekin II and the three (probably four) candidates for the Patriarch of Istanbul started on 23 February.[11] Information regarding the contents of this meeting will probably be circulated in the media in the upcoming days. [Update: Such information began to circulate in the media by the evening of 24 February].

As we had mentioned in our previous writing on this issue,

Karekin II is known for his biased stance against Turkey and is frequently subject to criticisms that he has gravely damaged the Armenian Apostolic Church by acting based on his personal ambitions.[13] In this respect, it is apparent that the outside intervention towards the election of the new Istanbul patriarch done by Karekin II in excess of his authority will not be to the benefit of either Turkish-Armenian relations or the Armenian community in Turkey. It will be most beneficial for all if the election of the new Istanbul patriarch is carried out without outside intervention and with as much societal consensus as possible.

[1] Mehmet Oğuzhan Tulun, “The Dispute Over The Election Of The Armenian Patriarch Of Istanbul Has Yet Again Intensified”, AVİM, 15.11.2016, http://avim.org.tr/en/Yorum/THE-DISPUTE-OVER-THE-ELECTION-OF-THE-ARMENIAN-PATRIARCH-OF-ISTANBUL-HAS-YET-AGAIN-INTENSIFIED

[2] Tulun, “The Dispute Over The Election Of The Armenian Patriarch Of Istanbul Has Yet Again Intensified”.

[9] “Patriarchate's statement before the visit to Etchmiadzin: there cannot be any instruction”, Agos, 02.20.2017, http://www.agos.com.tr/en/article/17761/patriarchate-s-statement-before-the-visit-to-etchmiadzin-there-cannot-be-any-instruction

[11] “Bishops' meetings in Etchmiadzin to start on Thursday”, Agos, http://www.agos.com.tr/en/article/17774/bishops-meetings-in-etchmiadzin-to-start-on-thursday

[12] Tulun, “The Dispute Over The Election Of The Armenian Patriarch Of Istanbul Has Yet Again Intensified”.