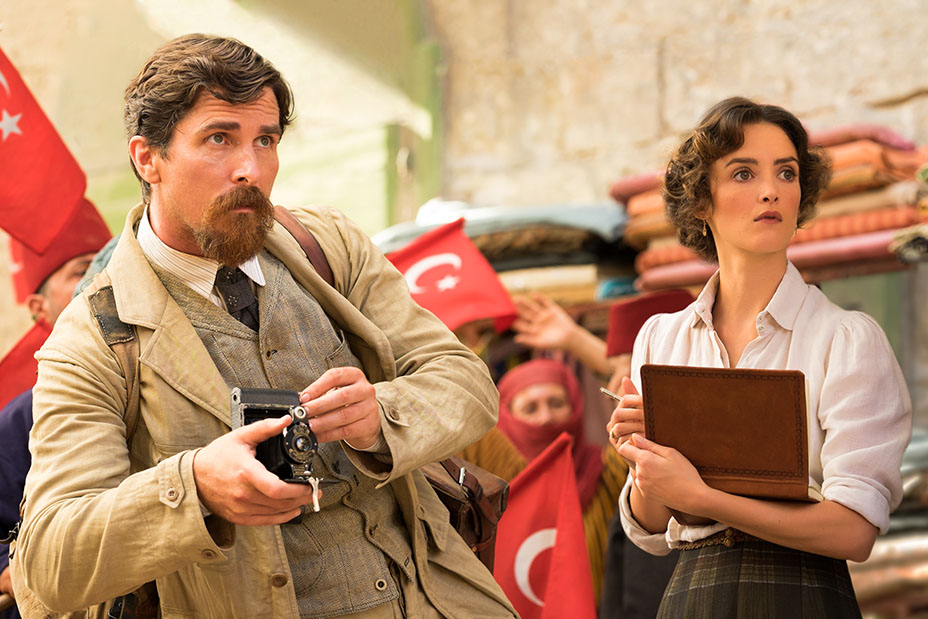 The release of the motion picture The Promise on April 21, 2017 was marred by the debates surrounding the content of the movie. The movie narrates the story of the relocation of Armenians in the Ottoman Empire during World War One. Funded to the figure of $100 million by Armenian businessman Kirk Kerkorian, the movie has proven unsuccessful at the box office, garnering a paltry $8.2 million.

Setting aside the subpar commercial success of the movie, The Promise in fact represents a shift in the strategy of the Armenian lobby to influence public opinion via the utilization of popular culture. This strategy was elaborated upon in an article penned by Armenian priest Bedros Shetilian for the Dashnak aligned Armenian Weekly in which he argued that there was an imperative on Armenians to make the “genocide recognized by the masses.” Shetilian continued by arguing that the movie industry constitutes the most suitable means to achieve this, calling for the large Armenian population in Hollywood to be mobilized in pursuit of this cause. Shelilian continues that it is imperative that the Armenian lobby also work to capitalize on Turkey’s poor image in the West, with the “final goal” being to force Turkey to “recognize the Armenian Genocide, to pay reparations, and to return our land.”[1]

As part of the efforts to promote The Promise, the Armenian lobby has also sought to utilize celebrities to bring greater attention to their cause. Among the celebrities present at the Los Angeles premiere of the The Promise were singer Cher, the Kardashian sisters and actor Sylvester Stallone.[2] The New York premier was attended by Bob Morgenthau, the great grandson of Henry Morgenthau who served as US ambassador to the Ottoman Empire between 1913 and 1916,[3] and whose disputed diary represents a cornerstone of the Armenian narrative surrounding the period.[4]

The cast of The Promise likewise have reportedly spoke about the “shock and sympathy” that they felt upon learning about the events of 1915 from the Armenian perspective. Singer Elton John personally hosted a screening of The Promise at a party held by his charitable foundation.[5] In addition to this, Survival Pictures has promoted the hashtag #KeepThePromise on social media, which was reportedly endorsed by celebrities such as Elton John, Barbara Streisand, Andre Agassi, Cher, Sylvester Stallone and others.

This is indicative of the wider efforts of the Armenian lobby to collaborate with celebrities and prominent public figures to raise awareness for their cause. These efforts include an annual award named after Armenian actor Aurora Mardiganian, described by Armenpress as part of an “expansive effort by prominent Armenians” to ensure the public visibility of the “Armenian genocide." The inaugural prize of $100,000 was awarded to the recipient by actor George Clooney at a ceremony held in the Armenian capital Yerevan.[6] Speaking at the ceremony, Clooney argued that the only way to honor the “Armenian victims” was to call the events of 1915 what he termed its “true name - genocide.” Clooney continued by invoking a controversial quote falsely attributed to Adolf Hitler, “’but who remembers Armenia?’" (sic)[7] which Clooney completed with “the answer is the whole world. That's who.”[8]

The dividends of this strategy are demonstrated by a column published in Forbes magazine discussing Clooney’s role on the Armenian question and the Aurora Award. The author, after noting that Clooney is his favorite movie star, continues by stating that he also admires Clooney for turning the spotlight on various social issues “while the rest of the world turns a blind eye.”[9] Thus, as a consequence of virtue signaling, debate concerning historical events becomes reality settled in the favor of one side of the story.

The primary Armenian lobby group in the United States, the Armenian National Committee of Armenia (ANCA), has sought to bring The Promise to the attention of law makers by organizing special viewings of the film on Capitol Hill, Washington DC which were reportedly attended by members of Congress, congressional aides, and a “cross section of the Washington DC foreign policy community.” The ANCA launched a campaign on the same day to collect the signatures of law makers for a petition to urge President Trump to designate April 24 as a ‘day of remembrance for the Armenian genocide.’[10] The comments of ANCA head Aram Hamparian reveal the extent to which the Armenian lobby expect to reap dividends from this campaign, Hamparian has stated that The Promise was pushing America to a “tipping point,” at which US policy makers would finally “reject the shameful veto that Turkey has, for far too long, exercised against honest American condemnation and commemoration of the Armenian Genocide.”[11]

Similar efforts were also undertaken by the Armenian National Committee of Canada (ANCC) which organized a showing of the movie on Parliament Hill, Ottawa on June 5, 2017. Dr. Vatche Chamlian MP spoke after the screening to stress the importance of supporting The Promise which he claimed aims to “reveal the truth about historical atrocities such as the Armenian Genocide.”[12] The Promise was also screened at the Vatican, with the director, producer and some of the cast in attendance. This screening was described by Variety as a clear sign of “Catholic Church support ahead of the film’s upcoming U.S. release.”[13]

Director Terry George and producer Eric Esrailian similarly conducted a two day series of meetings in Congress to discuss The Promise, and to garner support for efforts to have the events of 1915 designated as genocide by law makers.[14] Terry George further stated that he would like to see The Promise to be utilized as a “historically educational” film used in schools when teaching the Armenian genocide.[15]

Another facet of the lobbying efforts surrounding the movie includes the earmarking of the proceeds of the movie to the University of California at Los Angeles’ School of Law under the guise of a ‘Promise Institute.’ UCLA Chancellor Gene Block was quoted as stating that “In so many corners of the campus, our faculty and students are focused on identifying and addressing the conditions that create social unrest, displacement and injustice.”[16] The Sentry, a non-profit group co-founded by George Clooney, is also set to profit from the proceeds of the movie.”[17]

The impact of The Promise can also be gauged from the comments of reviewers and critics. Reviewer Elise Jost wrote that whether the movie is good is or not is irrelevant as “what matters is that it could help raise awareness on a chapter of history that has been buried for way too long. Although it appears to heavily romanticize the story, it could still help shed some light on the horrors inflicted on the Armenian population.”[18] Another reviewer noted that “more than a century after the genocide occurred, the Turkish government has yet to formally recognize its role in the mass murders. That’s a bitter legacy — and a movie like The Promise does precious little to bring such an injustice to light.”[19]

Despite the efforts by the Armenian lobby to utilize the movie industry in an effort to establish historic fact, it is abundantly clear that the reviewers and even director of the film have little familiarity with the intricacies of the debates surrounding the relocation of Armenians in 1915. Director Terry George is on record as erroneously stating that “after the First World War, initially, the British and French were rounding up everyone involved in the attempt to wipe out the Armenian nation,” continuing by saying that the great powers became more interested in “dividing up the Ottoman Empire. They needed stability in Turkey. So they came to foster the government of [Mustafa] Ataturk, and he created the state of Turkey out of what the British and French left him.[20] George has likewise claimed that the influence of the Turkish government has stifled the debates surrounding the events of 1915, further noting that the “vast majority of historical study has determined that this was a planned attempt to wipe out the Armenian nation.” George continues by stating that “we need to get beyond that diversionary discussion to why! Why did it happen and how do we move on from that and how do we reconcile these two nations again? … Let’s bring the discussion out in the open.”[21] George’s comments not only betray his unfamiliarity with the subject matter, but also reinforce the double speak that characterizes much of the debate regarding the events of 1915. On one hand, there are calls for dialogue and reconciliation but on the other hand, there are efforts to silence any elaboration of the Turkish narrative.

The effort to silence competing narratives became apparent after the motion picture The Ottoman Lieutenant was released in December, 2016. The movie, reportedly an attempt to depict the Turkish narrative regarding 1915, provoked a swift response from the both the Armenian and Greek lobbies. The American Hellenic Council called on the Greek American community and all descendants of the “Armenian, Greek, and Assyrian Genocide” (sic) to boycott The Ottoman Lieutenant.[22] These actions were bolstered by the efforts of the Armenian Youth Federation, which organized a letter writing campaign urging theaters and campuses to refrain from screening the movie, explicitly rejecting what they termed the “Turkish narrative and strategy” of “evading reparations has changed multiple times in the last 102 years, and has included everything from claiming Armenians committed genocide against the Turks, to minimizing the severity and describing it with words like ‘civil war’ and ‘common pain.’”[23] Thus, the dominant narrative becomes solidified with the Turks portrayed simply as the perpetrators of genocide, with no attention given to the actions of Armenian revolutionary organizations and the subsequent suffering of Turks during the same period.

[4] For an explanation of the controversy surrounding Morgenthau’s diary and an analysis of the disparities between the published diary and Morgenthau’s private papers, see Heath W. Lowry, The Story Behind Ambassador Morgenthau's Story (Istanbul: ISIS, 1990).

[7] For a discussion of the debates surrounding this quote attributed to Adolf Hitler, see Heath W. Lowry, “The U.S. Congress and Adolf Hitler on the Armenians,” Political Communication 3 (1985): 111-140.