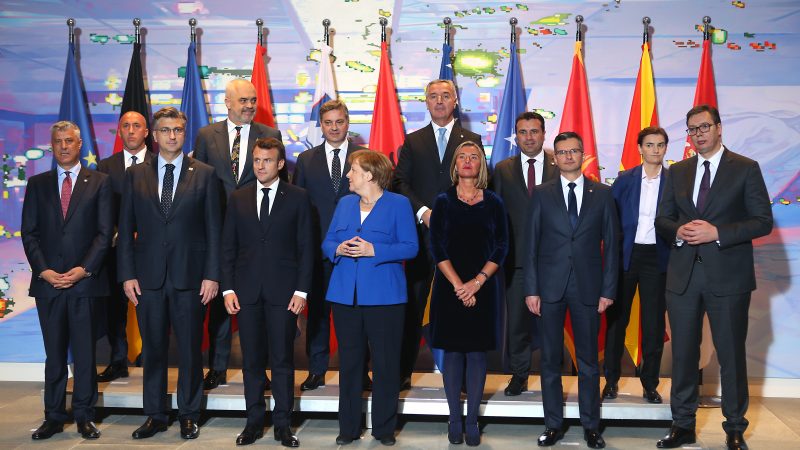 There are times when history comes to a halt and other times when its wheels begin to turn. This is one of those times. Among the current EU leaders, German Chancellor Angela Merkel has held office the longest. She has attended approximately 100 EU summits, frequently referred to as "the room's only grown-up." She was instrumental in steering the EU through the refugee crisis, the eurozone crisis, Covid-19, and, to some extent, Brexit.[1]

Merkel is also notoriously difficult to define as a character and as a Chancellor. This article is a tale of many Merkel's with many faces. To truly understand her negative legacy on the Balkans, one must first decipher Chancellor Merkel's many faces.

To comprehend Merkel's role in history, one must first comprehend her perspective on it. She was an individual who valued history. Her remarks were laced with allusions to historical figures and teachings. She argued that the past provided context for the present and was a guide for the future.  She realized that chaotic historical forces were constantly lurking beneath the surface of events, and all forms of human and societal order were frail and transitory.[2] The collapse of the East German system she witnessed has probably contributed to this worldview.

In a 2018 speech to CDU members, she contrasted the bleak international outlook to the period preceding the Thirty Years' War and warned against the complacency that long years of peace might breed. In her remarks regarding the Thirty Years' War, she also emphasized the effort required to forge the 1648 Peace of Westphalia, which brought the conflict to an end: "It took years to find peace." At another point, she stated that she was concerned that liberal societies were at greater risk than anybody realized in the post-Cold War era.[3] She had a certain "deterministic point" of view regarding international politics.

Merkel and the Balkans

Angela Merkel has long been seen as a stalwart advocate of Eastern Europe and the Balkans. Many individuals argued that she was aware of the difficulties of both regions. She grew up in East Germany, studied in what was then Czechoslovakia, and admired the region's anti-communist movements. While severe disagreements erupted between Berlin and other Eastern Europe and the Balkans nations, Merkel, cognizant of the region's history and complexity, endeavored to maintain her 'open door' policy. [4]

During Merkel's period, German presence in the Balkans has been strong. Yet, on par with German foreign policy not very visible. Angela Merkel has visited the Balkans numerous times since assuming office in 2005, spoke with lawmakers and met with a large number of members of civil society. While doing so, she kept repeating that the Balkans were a part of the EU.[5]

Despite those promises, since Croatia's entry in the summer of 2013, the other Balkan states have been placed on hold for EU enlargement. Thus, Albania, North Macedonia, and Montenegro's entrance to NATO - the only significant move forward in a long time in the Balkans – is in fact, the achievement of the United States of America (USA) and Turkey. [6]

Misconceptions and Further Balkanization of the Balkans

In a speech in July, Angela Merkel stated that the US-led coalition, which included Germany, has failed to establish a nation in Afghanistan following a two-decade conflict.[7] This speech shows how deeply the German colonial impulse remained embedded in Angela Merkel's world outlook. Part of this colonial, imperial outlook was transposed to Germany's Foreign Policy in the Balkans.

She did not have to be the main actor or the main culprit. After all, Europe saw the rise of populist leaders who would gladly take center stage to be useful tools in this respect, such as Emmanuel Macron and Sebastian Kurz. This also happened in European Union's (EU's) politics in the Balkans. [8] Merkel has never tried to be the main actor in Europe. As such, she did not become the main culprit in various political developments. In this context, it is necessary to remember the presence of populist leaders in Europe who happily tried to occupy the center of the scene, as mentioned above, such as Emmanuel Macron and Sebastian Kurz. Indeed, the overly ambitious policies of Emmanuel Macron and Sebastian Kurz, trying to come to the fore in everything, were also experienced in the politics of the European Union (EU) in the Balkans.

During Merkel's period, Western countries, particularly those of the European Union, have tried to redefine the Balkan region ontologically, beginning with its name. This created an existential crisis for the region. In renaming, carving, dividing up the region, the EU, particularly Germany under Merkel, had several goals. The first is to separate the current EU Balkan member states from their regional and cultural roots. Second, to provide other Balkan countries with a road map by creating a second category called a divisive and discriminatory term "Western Balkans". Third, creating a grouping just for Turkey, to close Turkey's EU membership opportunity.[9] In this context, it should be noted that Germany under Merkel is well aware that trying to destroy an identity is much easier than constructing a new artificial identity.

Integrating Balkans to the Club of Chosen, EU

It has been increasingly apparent that the EU has been employing a double standard to different nations at different times of accession process, as in the case of the Island of Cyprus. EU did this not only during the admittance to the membership but also after the relevant countries were admitted to the EU. One can observe this in the cases of Austria and Slovenia. Populist leaders currently run both countries. In the case of Austria, it was run by a populist leader who had to resign after a long reign of destructive xenophobic domestic and foreign policies.[10] Nevertheless, Sebastian Kurz managed to pursue these policies without any penalty from Brussels.

Slovenia joined this path as well. Current Prime Minister Janez Jansa has been pursuing increasingly populist domestic and international policies. However, if Slovenia were a non-EU country, these policies could be called authoritarian. Again, this was done with impunity from Brussels.[11]

These had different effects on the Balkans. Firstly, the double standards broke the enthusiasm of the other Balkan countries to implement reforms to join the EU.[12] Secondly, Western European EU countries such as Germany, which Merkel led, used other EU countries such as Slovenia in attempts to reshape the Balkans. However, this time, attempts were made not to change identity but to shape its geographical boundaries. The latest attempt, which was leaked to the press as the Slovenian Documents, was the latest example in this respect.[13]

Overall, Merkel's foreign policy has been successful as an economic plan, while the political approach has not. In recent years, German corporations invested over €3 billion in just Serbia, creating over 65,000 jobs, demonstrating how desirable Serbia has become, particularly for German automotive supplier companies. Before her retirement, Merkel's next step was the Green Deal. During her time in office, the EU has an enticing offer of a transformative future vision backed up by much-needed money for the area. For example, it could contribute to Balkan's energy market liberalization by unlocking solar and wind energy potential and establishing a subsidy scheme to replace small stoves in families, as East Germany did in the 1990s with German Development Bank credits. These are examples of how the EU and Merkel see the Balkans.[14]

[2] Jeremy Cliffe, “The Fateful Chancellor: What the End of the Merkel Era Means for the World,” New Statesman (blog), September 15, 2021, https://www.newstatesman.com/politics/2021/09/the-fateful-chancellor-what-the-end-of-the-merkel-era-means-for-the-world.

[3] René Pfister, “Dim View of the World: Will Merkel Be Followed by Darkness?,” Der Spiegel, May 28, 2019, sec. International, https://www.spiegel.de/international/germany/dim-view-of-the-world-will-merkel-be-followed-by-darkness-a-1268003.html; Cliffe, “The Fateful Chancellor.”

[7] Servet Günerigök, “‘We Have Not Been Able to Build a Nation’ in Afghanistan: Merkel,” Anadolu Agency, July 16, 2021, sec. Asia-Pasific, https://www.aa.com.tr/en/asia-pacific/we-have-not-been-able-to-build-a-nation-in-afghanistan-merkel/2306120.