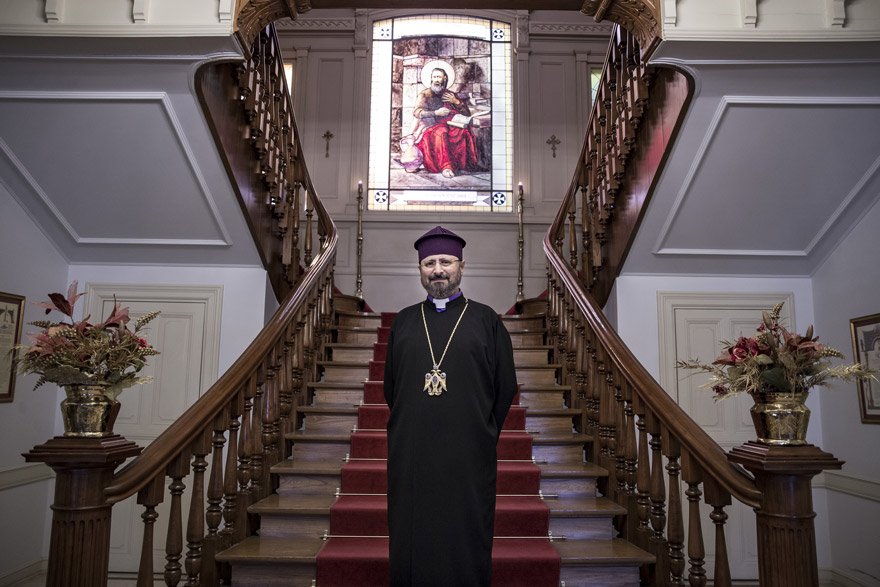 In a two-stage patriarch election that started on 7 December and ended with a voting conducted at the Armenian Patriarchate of Istanbul on 11 December, Bishop Sahak Mashalian won by a landslide and was thus elected as the 85th Armenian Patriarch of Istanbul.[1] Having won the election, Mashalian assumed the title of Sahak II. With this, the patriarch election process that started with the passing away of Patriarch Mesrop II. Mutafian on 8 March 2019 after his incapacitation in 2008 has concluded.

Within this time frame, several disputes occurred amongst Turkish Armenians due to the patriarch election, contacts were made with official authorities regarding the administrative aspects of the election, and there were several actors from outside of Turkey who attempted to intervene in the said process.[2] During this turbulent process; there were those who claimed to be the trustee of the Patriarchate and who attempted to engage in a power struggle with the official authorities,[3] those who stated that they would not recognize the title of whomever would be elected as the patriarch,[4] and even those who filed legal cases against the patriarch election process.[5] Despite all stalling attempts, judging from the things written about him, a very well educated individual with strong leadership and oratory skills and who is aware of his responsibilities was elected to the office of the patriarch.[6]

Immediately after assuming office, Patriarch Sahak II stressed that atop the issues he would prioritize is the reorganization of Turkish Armenians as a community. Opinion leaders of the Turkish Armenian community have essentially been indicating the importance of this for years. Sahak II made the following statement concerning this issue:

“[…] If you we don’t ensure our organization, we will drown. Every year, 12 births occur versus 26 deaths. The population of our community is progressively dwindling. From now on, we will work towards establishing the legal framework of an upper structure that will make our community more coordinated. We are a valuable minority for this country. We are always told at the state level that we are valuable. We will continue to offer our contributions to Turkey as the loyal citizens of this country. However, we can’t say that we don’t have problems when we do in fact have them.

First and foremost, we would like to form a human resources unit. We held elections but we don’t know how many of our people are alive or how many voters we have. We have identified deceased people who have nevertheless not been removed from voter lists. The total number of all minorities in Turkey would not exceed 80 thousand. If the necessary diligence is not shown, we, as the color [diverse elements] of this country, will fade.

Turkey is the country that harbors the least number of Christians in the Islamic geography [world]. Losing cultural, linguistic wealth [diversity] is also a form of becoming poor. […]”[7]

Another one of his statements was as follows:

“[…] You can’t destroy a people who have not lost their spirit. By extension, the patriarchate and the patriarchs are people who organize our moral world. As such, the first thing we need to do as the patriarchate is to create a new excitement, a new spirit and to open a new horizon for our people. If we achieve this, other things will slowly improve as well. The people and the patriarch have embraced, and now, with excitement, they want to take new initiatives, they want to solve the problems that have accumulated in front of the community. Of course, all of these things require long explanations in different fields, but the issue that we need to solve first is to remedy our organizational deficiency.”[8]

We would like to congratulate Patriarch Sahak II for the success he has attained at the election and wish him success at his new office. In addition, we are of the opinion that it is important to bring the following two points to the attention of the new Patriarch:

1) Towards the end of the Ottoman period, certain Armenian patriarchs, ignoring the interests of the state and the people they were representing, unfortunately collaborated with foreign powers who sought to weaken and even bring down the Ottoman Empire. This behavior damaged the reputation of the Armenian Patriarchate of Istanbul -the roots of which date back to the 1460s- in the eyes both the state and the people. A new era was entered with the founding of the Republic of Turkey and the Armenian Patriarchate of Istanbul became one of the important institutions of the country.  The Patriarchate took care not to repeat the mistakes that had been made during the Ottoman period.

Sahak II, as if to indicate that he is aware of the importance and effects of this issue, made the following statement: “[…] Just as we talk about the wrongness of Islamophobia, we have to talk about Christianophobia. What happened 100 years ago has happened and is over. Non-Muslims are no longer the fifth column [they should not be treated as the fifth column], they are loyal citizens, as they always have been.”[9] With these words, the Patriarch has stressed that the past should be left in the past and that people should march towards the future with mutual trust. It would be expected that the reorganization of the Turkish Armenian community that the Patriarch refers to should make an important contribution to the strengthening of mutual trust and to the revitalization of cultural diversity.

As can be seen, just as they have a religious identity, patriarchs also have a political influence. In this regard, we had made the following point in one of our previous articles:

2) After Nikol Pashinyan came to power in Armenia in 2018, Armenia has adopted Pan-Armenianism as a foreign policy tool.[11] Armenia has begun to claim that it is a center for Armenians of the whole world, and is calling upon Armenians everywhere to invest more in Armenia and to be more engaged with the country. In this framework, actors have emerged who are attempting to portray the Turkish Armenian community as if they are a diaspora of Armenia, even though the said community is one of the fundamental elements of Turkey and is one that has an idiosyncratic historical and traditional structure. These actors are also trying to impose upon Turkish Armenians the bellicose mindset and anti-Turkey discourse of Armenia and the Diaspora Armenians.[12]

Thus far, the Armenian Patriarchate of Istanbul has kept itself away from such attempts. In this regard, Patriarch Sahak II has exhibited a principled stance by criticizing the handling by foreign parliaments of the genocide allegations heavily supported and attempted to be propagated by Armenia and Diaspora Armenian groups:

“Some things should not be attached importance. Somethings [resolutions] are constantly being adopted in parliaments. But there is nothing that concerns us or requires us to be directly engaged. As Armenians in Turkey, it saddens us that the pains suffered 100 years ago in these lands are being used in other countries' parliaments as an element of strategic, economic, and political pressure. We see this as an inappropriate situation directed at our ancestors.

We would have wanted that this problem experienced in these lands to be discussed by people who live in these lands. We would have especially wanted Turkey-Armenia relations to be straightened, for the two parties to speak to one another. Since the two parties do not speak, third, fourth parties are bestowed the right to speak across the oceans [from afar]. If only the Armenia-Turkey protocols had been implemented, the Vienna meetings had taken place, the joint historical commissions had been established. All of these are situations that we must deal with. Since they are postponed, they are used as a leverage to heckle Turkey. An 'Armenian thesis [discourse]' utilized to heckle Turkey creates the impression of abuse. And I don’t think that this is very ethical.

There is a political dimension to this ordeal. But I am not a politician. It falls upon politicians to comment on this. As the Armenian community, we are a people who are integrated with Turkey. We have made a fateful pact with this country. We have established a life in unison with all the elements of this country. We forgot [dealt with] what happened 100 years ago by remembering them. We remember by forgetting [by dealing with them]. This is a choice of the Istanbul Armenian community. We chose to live in this country. This is a situation that differentiates us from the Diaspora and the Armenia Armenians. We experienced the trauma of the 1915 and, by somehow remaining in this country, we treated this trauma. Political events that take place outside of the Turkey Armenians inevitably affect us as well. The provocation of these things in Turkey is also increasing hate speech.”[13]

This principled stance by Sahak II received quick reaction from Diaspora circles. In his article, Harut Sassounian, an author of the Diaspora with one the most extreme views, accused Sahak II of carrying out Turkey’s propaganda and made the ridiculous and ignorant claim that Turkish Armenians “are hostages deprived of their basic human rights.”[14] Anyone who is even slightly familiar with Turkey and its society will understand that the comments made about Turkey by Sassounian and individuals who possess his extremist views are far-removed from reality.

Sassounian’s article lays bare some fundamental differences between Turkish Armenians and Diaspora Armenians. While Turkish Armenians are integrated citizens who look out for their country under any circumstance, many of the Diaspora Armenians are unfortunately individuals who possess ignorant views of Turkey, who have embraced hatred against Turks as an identity, who lack the courage to examine painful past events with all their inconvenient aspects, and who are in pursuit of exacting primitive revenge instead of engaging in reconciliation. In connection with this point, it will be appropriate to mention here a statement made by Sahak II before he became the patriarch:

“[…] The ill fate of us Istanbul Armenians has always been not to be understood by the other Armenians of the world. From afar, they have always been advising us on how to be Armenian. […] When they do not reach their desired outcome, they lecture us and harangue us on honor, cowardice, and bravery. Now they are trying to teach us a lesson on how to be clerics. We do not expect them to understand us. We should understand each other, that will suffice.”[15]

From the outset of assuming his office, with a sense of duty emanating from his position as the patriarch, the new Armenian Patriarch of Istanbul Sahak II has made important statements about matters of particular concern for Turkey and the Turkish Armenian community. He has thus signaled that he will administer the Armenian Patriarchate of Istanbul with the seriousness that it deserves. We are of the belief that the Armenian Patriarchate of Istanbul, which has had an independent function throughout its history, will serve the interests of Turkey and its citizens with this awareness under the leadership of its 85th Patriarch Sahak II Mashalian. Lastly, we would like to again wish Patriarch Sahak II success at his new office.

[3] Mehmet Oğuzhan Tulun, “The Election Process Of The Armenian Patriarch Of Istanbul Has Been Reset,” Center for Eurasian Studies (AVİM), Analysis No: 2018/12, May 9, 2018, https://avim.org.tr/en/Analiz/THE-ELECTION-PROCESS-OF-THE-ARMENIAN-PATRIARCH-OF-ISTANBUL-HAS-BEEN-RESET

[10] Tulun, “The Election Process Of The Armenian Patriarch Of Istanbul Has Been Reset.”