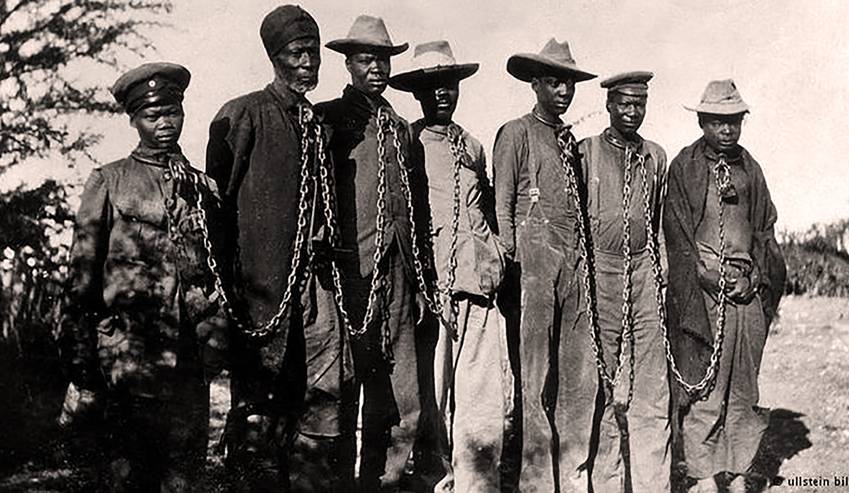 There are a couple of frequently used clichés when it comes to the genocide narrative about 1915 events. One such cliché is basically as follows: “Turks committed genocide against Armenians back in 1915. It was the first genocide of the 20th century. The Turks’ conduct in the Genocide served as a blueprint for what the Nazi Germany did against the Jews during the Holocaust.” “Genocide scholars” in Germany and elsewhere labeling the 1915 events as genocide have often repeated similar statements.

Germany, as a country, with its politicians, academics, and institutions, has for quite some time now been at the forefront of supporting the genocide narrative about 1915 events and the various groups who espouse this narrative. The rising Islamophobia in Europe and the anti-Turkey frenzy prevalent in German society today serves to bolster Germany’s support of the genocide narrative even more.

Yet Germany’s conduct towards Namibia and its coming to terms with what the German colonial administration had done against the indigenous Herero and Nama tribes in 1904-1908 reveals just how duplicitous Germany is when it comes to the issue of disputes regarding genocide.

The Herero and Nama tribes in what is now present day Namibia had rebelled against the German colonial administration in power at that time. In response, the German administration employed a systematic extermination policy while it was crushing the rebellion. The evidence regarding the extermination policy against the Herero and the Nama is so substantial and Namibia’s people so insistent that Germany now feels pressured to slowly indicate that what transpired back in 1904-1908 fits into the description of what we now define as genocide. It should also be noted that currently Germany is Namibia’s biggest foreign aid donor, due to “the special responsibility [Germany] feel[s] because of German-Namibian history.”[1]

Up until recently, Germany’s extermination policy against the Herero and the Nama were in obscurity, mostly unknown in Germany and the also the rest of the world (even in Namibia itself). Germany and other countries (especially European countries) that assumed they had the moral authority to pass judgement, resolutions, and legislations on genocide disputes and castigate Turkey, for some reason were clueless about what Germany did back in the beginning of the 20th century, about two decades before the Nazi Party had even come to power in Germany.

Now that Germany seems more willing to talk about its extermination policy against the Herero and the Nama, more and more news in the international media has been popping up about these events and that these events should be recognized as genocide.[2] Now there is talk of what happened to the Herero and the Nama being the first genocide in the 20th century. Now there is talk of what Germany did in 1904-1908 foreshadowing what it had done during the Holocaust.

The German government is now carrying out negotiations with the Namibian government on how Germany will “compensate and apologize to Namibia.”[3] While it is carrying out negotiations with Namibia, it is attempting to sideline the Herero and Nama tribes by refusing to directly hold discussions with and refusing to pay reparations to them (opting instead to give development aid to Namibia on a country basis). German officials reportedly indicate that “Reparations would amount to acknowledging guilt under the 1948 United Nations Convention on Genocide…”, that “the convention cannot be applied retroactively to past genocides”, and that direct discussions with the Herero and Nama would fall under the category of reparations.

It is interesting that Germany, which is at the forefront of accusing Turkey with genocide concerning historical events that in no way fit into the definition of genocide, seems to have suddenly remembered how international law works and how the term genocide should be applied in practice.

Furthermore, Germany’s special envoy for negotiations with Namibia, Ruprecht Polenz, indicated that giving reparations to the Herero and Nama tribes, whose ancestors had been subjected to Germany’s extermination policy, would result in Germany and other countries constantly facing new claims due to such issues. Polenz also added; “Maybe even the United States would ask us now what to do with the Indians?” … You cannot restart history. You cannot rewind time, not in your private life, not in public life.”[4]

It is interesting that Germany only seems to worry about the misuse of claims of genocide and only seems to call upon the need to avoid dwelling in the past when Germany’s own interests are at stake, and seems to have no problem supporting a distorted genocide narrative used by various groups to make unjustified demands for reparations from Turkey.

The following questions need to be answered not only by Germany, but also by “genocide scholars” labeling the 1915 events as genocide and others who espouse the genocide narrative:

1) Why was Germany’s extermination policy against the Herero and the Nama in so much obscurity, especially in Germany? Was Germany, in terms of its society and its academics, ignorant of its own history? Were academics sponsored by German funds ignorant of Germany’s history?

3) Why is this extermination policy still not mentioned in German schools,[5] while German politicians are attempting to have the 1915 events taught as genocide in German schools’ curriculum?

4) Supposedly well versed on the subject of genocide, why did so many “genocide scholars” overlook the extermination policy of 1904-1908 against the Herero and the Nama, and label the 1915 events as being the “first genocide of the 20th century”?

5) Why did so many “genocide scholars” portray the 1915 events as being the blueprint of the Holocaust, when it seems that the extermination policy against the Herero and the Nama were in fact the blueprint for the Holocaust? How could Germany take the Ottoman Empire as an example for carrying out genocide, when it already had a precedent for such an action based on its own conducts in its colonial possessions?

6) Now that what Germany did back in 1904-1908 is coming to light, will groups espousing the genocide narrative about the 1915 events continue to use the cliché outlined in the beginning of this article? If they drop the use of this cliché, will they provide an explanation as to why they used it for so many years?

As the leading country of the European Union and one of world’s major economic and political powers, and with its power and position in the international community, Germany has so far managed to obscure its extermination policy of 1904-1908 against the Herero and the Nama. Sam Kambazembi, a Herero chief whose ancestors had been affected by Germany’s extermination policy, has reportedly stated; “The Germans thought they could keep this issue under the carpet and the world would never know about it. But now we have made noise.”[6]

Now that this issue is coming to light and receiving international attention, Germany will use its influence to twist and turn the strictly defined legal term “genocide” according to its interests, and come to an agreement with Namibia that will foremost protect Germany’s interests while sidelining the Herero and the Nama tribes. Both Turkey and also the international community must be keenly aware of Germany’s motivations and future conduct on this issue. Germany’s conduct will inevitably have ramifications on the discussions and disputes regarding real and claimed cases genocide elsewhere in the world.

[1] “Germany may pay out for Namibia genocide”, Times of Israel, 08.01.2017, http://www.timesofisrael.com/germany-may-pay-out-for-namibia-genocide/

[2] One of the latest examples is the following: Norimitsu Onishi, “Germany Grapples With Its African Genocide”, NY Times, 29.12.2016, http://www.nytimes.com/2016/12/29/world/africa/germany-genocide-namibia-holocaust.html