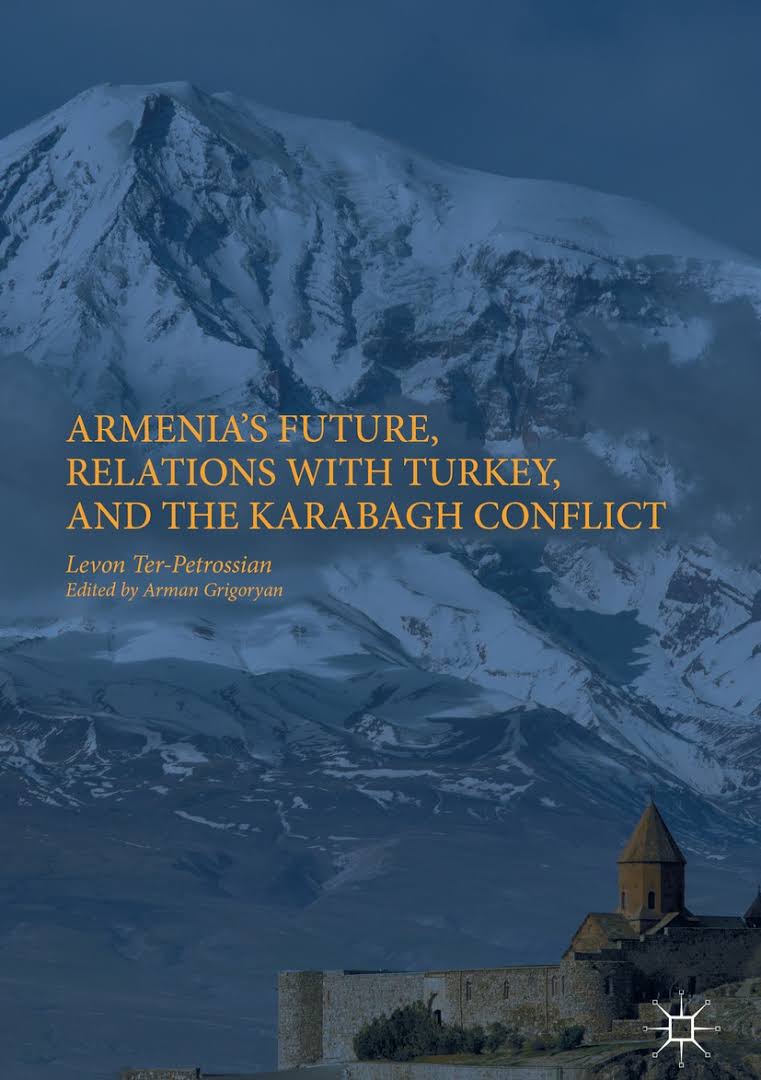 Title: Armenia’s Future, Relations with Turkey, and the Karabagh Conflict

This book entitled “Armenia’s Future, Relations with Turkey, and the Karabagh Conflict” compiles the articles, interviews, and speeches of Levon Ter-Petrossian who was the first president of Armenia after the Soviet Union dissolved. The editor of the book is Arman Grigoryan, a scholar at the Department of International Relations of Lehigh University.

The book presents a discussion on why Armenia needs to normalize its relations with Turkey and to settle the Karabagh conﬂict. According to the editor, "This book should obviously be of interest to anybody studying these issues. But it also should be of interest to students of post-Soviet politics, nationalism, and ethnonationalist conflict in general, because it seriously undermines quite a few of the cherished conventional wisdoms in those fields about conflicts like the Karabagh conflict or the one between Turks and Armenians.”

In this collection of Levon Ter-Petrossian's speeches, interviews and writings, presented in chronological order, the readers will find that the Ter-Petrossian's principles and assessments have been consistent during his time as head of state (1990-98) and opposition leader (after 2007). In addition to presenting the views of Ter-Petrossian, the book reveals the most important issues and disputes of Armenian politics for the last three decades.

Ter-Petrossian's views open a window against conventional narratives. It is seen that the author presents a constructive perspective on Turkish-Armenian relations.

Here are the points that draw attention in this book:

It is seen that Ter-Petrosian emphasizes the necessity of Armenia to establish normal relations with its neighbors and that Armenia’s relations with Turkey are of vital importance. According to Ter-Petrosian, Armenia should be guided by state interests and principles of realism in relations with Turkey and should adopt a flexible diplomatic posture. In this respect, Armenia should establish comprehensive economic relations with Turkey. Ter-Petrossian states that if Turkey and Armenia develop close commercial, economic, scientific, and cultural ties, and both parties stand to gain from acting on these interests and ensure that ties can be established without preconditions, they can then discuss all the controversial and thorny issues and find compromises and solutions acceptable to both parties.

According to Ter-Petrossian, as neighboring states, Armenia and Turkey should display the political will to establish commercial and economic relations and good neighborly relations within the framework of mutual benefit in order to gradually overcome historic antagonisms and to restore the mutual trust between Armenian and Turkish peoples.

"Reconciliation is not the case when everyone is a hundred percent happy."

Expressing that it is pointless to avoid compromises, Ter-Petrossian states that a deal with only one winner cannot succeed or last. At this point, he reveals the necessity of embarking on serious efforts towards the normalization of relations with Turkey and Azerbaijan.

Underlining that the guarantee of the survival of any country rests in its ability to establish normal relations with its neighbors, Ter Petrossian states that Armenian national consciousness has been poisoned by the illusion that Armenia’s national aspirations will be fulfilled by the strong states such as the Western European ones or Russia. He states that a security system that is based on reliance on powerful but distant actors such as Russia, European countries or the United States cannot be created; problems must be solved locally with immediate neighbors.

Ter-Petrossian states that the Karabagh problem should be solved exclusively through peaceful negotiations. At this point, he characterized the step-by-step solution as a realistic option. He says that there must be concrete progress in the process for the problems to reach a final solution.

He criticizes Armenia’s authorities during the presidency of Robert Kocharyan, indicating that they have misled the international community, and despite their affirmations of support for the compromise, they have hindered the solution process of the Karabagh issue to hold on to the status quo. According to Ter-Petrossian, the desire of the Armenian government to preserve the status quo stems from the premise that sooner or later the international community will come to accept the fait accompli and finally recognize the independence of Karabagh. However, Ter-Petrossian argues that this status quo cannot be maintained, as status quo rests on a consistent balance of power.

“The Turkish border will remain closed as long as the Karabagh conflict remains unresolved.”

Expressing that the unresolved state of the conﬂict is not in the interest of Armenia, Ter-Petrossian states that rejecting compromise and maintaining the effort of obtaining the maximum rather than the possible is hindering Armenia’s economic development and will lead to the ultimate destruction of Karabagh. As Ter-Petrossian points out, several difficulties arise due to the Karabagh conflict and the closed borders: there is an increase in the cost of cargo transportation to and from Armenia; from the standpoint of foreign investment, Armenia is becoming a risky zone; Armenia is being left out of regional organizations; Armenia is allocating a large portion of its meager resources to military spending; and Armenia is deprived of its most natural and favorable economic partners—Azerbaijan, Turkey, and, to an extent, Iran. Ter-Petrossian states that in all normal states, immediate neighbors account for at least 50 percent of foreign economic relations. However, due to the Karabagh conflict, Armenia is being condemned to political and economic isolation.

“Armenia will never sign any document that does not also carry the signature of Nagorno Karabagh.”

Emphasizing the right of the self-determination of the Nagorno-Karabakh people, Ter-Petrossian states that the Minsk Group, which was created by the European Security and Cooperation Organization, despite its many flaws, has been the most practical, even ideal format for themselves. Considering the right of self-determination of the “Nagorno-Karabagh Republic,” Ter-Petrossian thinks that the Madrid Principles proposed by the Minsk Group leaders provide a good basis for a solution within the framework of balanced reconciliations.

The Madrid Principles propose the withdrawal of Armenian forces from the region, the suspension the subject of the final status of Nagorno Karabagh, the return of the Azerbaijani population to the region, the deployment of peace-keeping forces across borders, the giving of the right of self-rule to Nagorno-Karabagh Armenians, and the determination of the status of Nagorno-Karabagh through a referendum.

Ter-Petrossian expresses that the demand for international recognition of the “Armenian genocide” cannot become part of the state’s agenda and that it is a dangerous attempt to make the recognition of “the genocide” the basis of Armenia's foreign policy. According to him, this policy is trampling on the greatest national tragedy of Armenians and making it an object of speculation.

Ter-Petrossian objects to the declaration of the French Senate’s voting on a law criminalizing the denial of the “Armenian genocide” as a major victory for Armenian diplomacy. According to Ter-Petrossian, it is clear that French politicians initiated the move with the aim of improving their appeal for French Armenian voters during the election period. The question that should be asked is whether this decision of the Senate is going to have a positive or negative effect on the normalization of Armenian-Turkish relations, because nobody can deny the vital importance of that issue for Armenia’s security and economic development.

Referring to the implementation of reforms in areas inhabited by Armenians in the Ottoman Empire, Ter-Petrossian states that the European Powers made unsystematic interventions during this period under the pretext of reforms, and this created a direct threat to the Armenian people’s physical well-being. He adds that Armenians do not have the luxury to repeat the mistake made by the Armenian political thinkers of the late 19th and early 20th centuries of rely on third parties on the question of Armenian-Turkish relations.

The Accession of Turkey to the European Union

Ter-Petrossian requests that the recognition of the “Armenian genocide” not be considered a precondition during negotiations related to Turkey’s membership in the European Union. With respect to Turkey’s integration into the European Union, he considers it as a prospect that would improve regional security and open alternative avenues for cooperation with the outside world, which would contribute to Armenia’s development. He states that an Armenia that shares a border with the European Union, instead of an Armenia isolated from the West, is a rationality that should be preferred.

Consequently, Levon Ter-Petrossian proposes that “Peace, Reconciliation, and Good-neighborly Relations” should be accepted as a slogan. Noting that political scientists and economists classify Armenia as a failed state along with Afghanistan, Somalia, Libya, Yemen, South Sudan, Iraq, and other similar states. He states that the “Peace, Reconciliation, and Good-neighborly Relations” platform creates an opportunity to leave this unfortunate situation.

Ter-Petrossian, who proposes a cooperation and reconciliation-based approach through mutual interests in Turkish-Armenian relations, puts forward the necessity of a political strategy that will create maximum advantages for both parties and offers his suggestions on this matter. The fact that the book mostly consists of Ter-Petrossian’s short interviews, conference presentations and speeches make it easy to read.  This book, which reveals the political picture of Armenia after the dissolution of the Soviet Union, is recommended to everyone who wants to read the traditional narratives in the Armenian society and politics with respect to the Turkish-Armenian relations, and the views of Ter-Petrossian who struggles against these narratives.