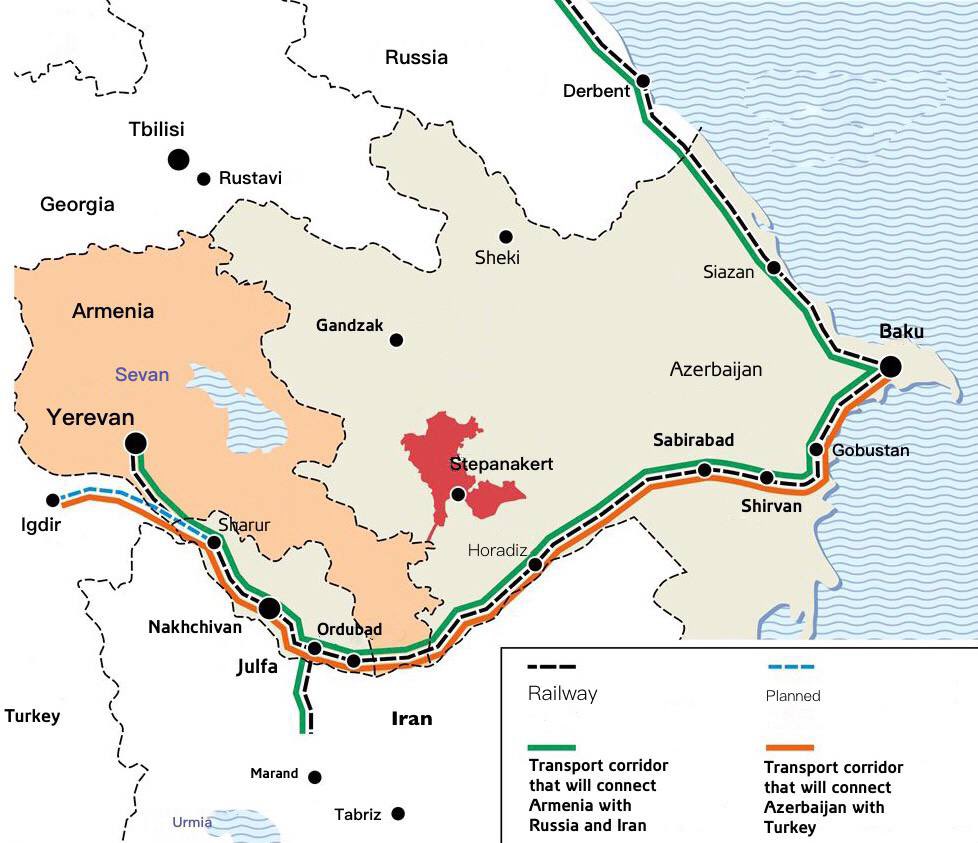 Since the emergence of the Nagorno-Karabakh conflict, the necessity of the establishment of communication and transportation links in the region has been put forward as a precondition for the peaceful solution of the conflict. In 1992, Turkish President of the period Turgut Özal, in his meeting with US President George H. W. Bush, made a proposal based on a land exchange within the framework of a "Corridor Change Plan". Later, based on this idea, the "Goble Plan" was put forward by Paul Goble in the US Department of State in 1999; it was proposed to give the Lachin corridor to Armenia in return for Azerbaijan to take the Megri (Zangezur) corridor, which would provide transportation between the Nakhichevan Autonomous Republic and Azerbaijan. However, this plan was shelved due to the internal turmoil in the party countries during the discussion of this plan and uncertainty concerning its content.[1]

The step-by-step approach, package solution, and Madrid Principles which was put forward by the Organization for Security Cooperation in Europe (OSCE) has also emphasized the need for the restoration of highways, railways, electricity transmission lines and connections, trade, and other relations simultaneously with the withdrawal of forces from Nagorno-Karabakh and the seven adjacent districts.

After the war between Georgia and Russia in 2008 due to the South Ossetia Region, it has been observed that Russia's influence in the Caucasus intensified and Russia’s affect in the Nagorno-Karabakh issue and its contribution to the negotiations increased. From this date on, Russian President Dmitry Medvedev considered Russia's mediating role in the Nagorno-Karabakh issue to be important for the country’s international reputation. A declaration initiated by Russia that demonstrated the intention to solve the problem peacefully between Armenia and Azerbaijan was the first document signed by the presidents of Armenia and Azerbaijan since the ceasefire of 1994.[2] Moreover, in 2009, Medvedev tasked Russian Foreign Minister Sergei Lavrov with becoming the lead mediator in the conflict resolution process.[3]

The ninth of the trilateral summits initiated as of 2009 with Russia at the helm was held in Kazan in 2011. The "Kazan Principles", which are the continuation of the Madrid Principles announced by the OSCE, were put forward during this summit. However, Azerbaijan objected to the ambiguity of some articles in these principles and the proposal to give a temporary status to Nagorno-Karabakh. With the ceasefire declaration signed between Armenia, Azerbaijan and Russia on 10 November 2020 after the 44-day war in Nagorno-Karabakh in the same year, we can argue that, based on the plan foreseen in the Kazan Principles, emphasis was placed on regional economic cooperation and restoration of transportation routes as a way to provide the cooperation. In the context of the ceasefire, the decision to ensure control of transportation links in the region by the Russian Federal Security Border Guard Service and the deployment of Russian peacekeepers was a step in favor of Russia in the resolution of the conflict.

With the ceasefire signed on 10 November 2020, a decision was made on the construction of all transport links, and after the trilateral summit in Moscow on 11 January 2021, the map of the agreed transportation routes -including the railway- was published in the Russian press.[4] The ceasefire guarantees the establishment and security of transport links between Azerbaijan and Nakhchivan. In this direction, a railway transportation plan that will connect Azerbaijan to Nakhchivan through the Zangezur (Megri) corridor in the Syunik region of Armenia is on the agenda.

Nakhchivan has been in an isolated situation since the collapse of the Soviet Union and the emergence of the Nagorno-Karabakh conflict. Transportation to Nakhchivan is only possible either by airplane from Baku or by road from Turkey or via Iran. It is also known that the customs authorities levy expensive charges on any vehicle crossing the border.[5] Therefore, the railway to be built in the Zangezur corridor will both remove the isolation of Nakhchivan and reduce transportation costs. A railway to be built in the new corridor will shorten the transportation distance compared to the Baku-Tbilisi-Kars railway and reduce transportation costs.[6]

Author Thomas De Waal states that if a normal relationship can be established in the region, Nakhchivan can be a crossroad linking east and west.[7] As a matter of fact, Azerbaijani President Ilham Aliyev invited the states of the region to benefit from the Zangezur corridor at the Economic Cooperation Organization and the Turkic Council summits. It has been announced that the infrastructure of the transportation link to be established between Nakhchivan and Azerbaijan will be constructed after the completion of the Horadiz (Fuzuli) and Agbend (Zanglian) railways whose foundations were laid on 14 February.

The Zangezur transportation road project has caused some reactions in Armenia. However, Aliyev did not avoid statements that could provoke these reactionary circles in Armenia because he as an advantageous position due to the "Lachin corridor" trump card; this corridor provides the connection between Armenia and Nagorno-Karabakh. Russian peacekeepers have been deployed on the link road in the Lachin region, which was returned to Azerbaijan on 1 December 2020. Although the final status of Nagorno-Karabakh has not been determined yet in accordance with Article 6 of the ceasefire, it is foreseen to establish a transport link between Armenia and Nagorno-Karabakh along the Lachin corridor that will pass through the Azerbaijani territories.

In addition, it is known that Armenia does not have a railway connection with Russia and the only transport link is a road through Georgia which is located in a troubled region due to bad weather conditions and contested geopolitics.[8] For this reason, the restoration of the railway that will connect Armenia to Russia through Azerbaijan, which was used during the time of the Soviet Union, has been brought to the agenda as well.[9] The railway connection with Iran via Nakhchivan is also gaining importance. The Iranian Foreign Minister Javad Zarif has announced that negotiations were held for the restoration of a railway connecting the Persian Gulf, the Black Sea, and Russia through Nakhchivan and Armenia.[10] Of course, financing issues must be resolved to realize these high-cost projects, and above all, the parties must show the willingness to end the conflict and act together.

The establishment transportation connections is also important for Turkey, which is one of the biggest foreign trade partners of the South Caucasus. In this way, it will be possible to integrate the developing Eurasian formation with the West through Turkey. The new transport routes will shorten the distance between Turkey and the Caspian Sea and Central Asia, and contribute to the development of Turkey's "Middle Corridor Initiative".