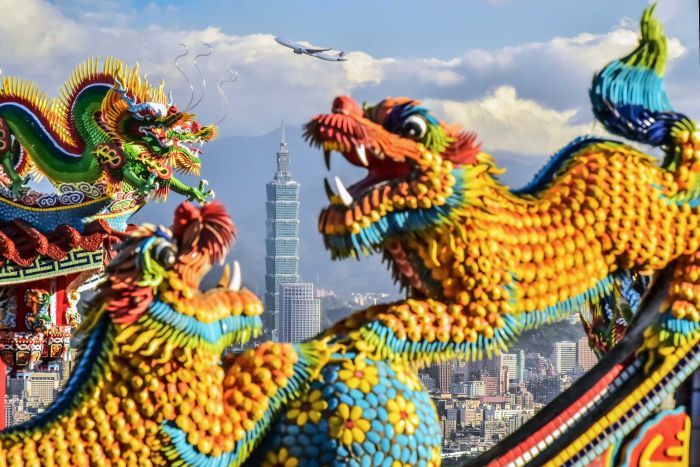 The incumbent president of Taiwan (Republic of China-RoC) Tsai Ing-Wen of the Democratic Progressive Party (DPP) won a landslide victory in the elections on 11 January 2020 over Daniel Han Kuo-yu of the main opposition party, the Kuomintang (KMT). As known, while DPP prefers to hold mainland China at arm’s length, the KMT prefers friendlier relations with mainland China. Tsai received 57.13 percent of the vote out of the 19,311,105 total electors of Taiwan, which has a population of 23 million. This means that she earned a record 8,170,231 votes, which is the highest number of votes ever cast for a candidate in a Taiwanese presidential election.[1] The importance of the national poll to Taiwan's electorate was reflected by the high voter turnout; 74.90%. The DPP lost seven of its 68 seats in the legislature. The KMT gained three, bringing its total to 38. Small parties and independents won the remaining 14 seats.[2] It should be noted that Taiwan began holding direct elections for the position of presidency in 1996.[3]

It is well known that China (People’s Republic of China-PRC) is aggressively pursuing a policy to unify China and Taiwan under a “one country, two systems” arrangement that was formulated in the early 1980s by Deng Xiaoping, the former leader of China during negotiations with the UK over Hong Kong. As known, Mainland China and the Island of Taiwan have been separately governed by two rival (Communist vs. Nationalist) Chinese administrations. Deng’s system was applied to Hong Kong in 1997 and to Macau, which was taken over from Portugal in 1999. The arrangement basically suggests that there would be only one China, but that these regions could retain their own economic and administrative systems. China has been insistently and threateningly trying to impose the same arrangement on Taiwan under the motto of "peaceful reunification", which in essence means that Taiwan must submit to China’s sovereignty.

Taiwan's relations with China deteriorated during Tsai's first term as president, which began in 2016. China suspected that Tsai and her party was pushing for the island’s formal independence, something China threatens will result in war.[4]

China’s displeasure with the position of Taiwan was made publicblatant in the 2 January 2019 speech delivered by Chinese President Xi Jinping at a gathering held in Beijing to commemorate the 40th anniversary of the “Message to Compatriots in Taiwan”[5]. The “Message to Compatriots in Taiwan” issued on 1 January 1979. Its last paragraph expresses the view that “The reunification of the motherland is the sacred mission history has handed to our generation”. President Xi said that “during the seven decades, the mainland and Taiwan reached the 1992 Consensus based on the one-China principle, and the political exchanges across the Straits have reached new heights. Over the 70 years, the basic principles of ‘peaceful reunification’ and ‘one country, two systems’ were established, and the basic policy of upholding ‘one country, two systems’ and advancing the national reunification was laid out.”[6] Chinese press also reported the following threatening expressions of Xi: “

“Chinese don't fight Chinese. We are willing to strive for peaceful reunification with utmost sincerity and greatest efforts as peaceful reunification is in the best interests of compatriots across the Strait as well as the Chinese nation. We make no promise to renounce the use of force and reserve the option of taking all necessary means. This does not target compatriots in Taiwan, but the interference of external forces and the very small number of ‘Taiwan independence’ separatists and their activities.”[7]

The 1992 Consensus was an agreement allegedly reached between mainland Chinese officials and Taiwan’s then-ruling (now opposition) party KMT, acknowledging the existence of One China, but with each side could hold “different interpretations” of what One China means.[8]

Balance sheet analysis of Taiwan 2020 elections for Taiwan and China

Taiwan Election results indicate that increased intimidation and bullying by China has helped Tsai-Ing Wen and her party DPP to win a landslide victory not only against the China-friendly opposition party but also against China itself. It should be remembered in this context that just 16 days before the presidential and legislative elections, the Shandong, China’s domestically-built new second aircraft carrier, sailed through the Taiwan Strait along with other Chinese ships. According to the Taiwan Ministry of National Defense, “Chinese naval vessels and air force jets have repeatedly passed close to Taiwan, actions which have been seen as attempts at intimidation ahead of Taiwan's January 11 elections.”[10] It seems that such intimidation moves have backfired and a clear majority of Taiwanese voters have not been deterred by China’s threats. In fact, according to the Guardian report, President Tsai said after the election that “This election result carries an added significance. They have shown that when our sovereignty and democracy are threatened the Taiwanese will shout our determination even more loudly back.”[11]

Another point worth mentioning is that the riots and the related events in Hong Kong have provided leverage to Tsai and the DPP to convince the clear majority of the Taiwanese voters that the “one country, two systems” arrangement has failed and that Hong Kong cannot be a model for Taiwan.

In sum, it can be said that Taiwan 2020 elections reveal the following points:

Taiwan's New Southbound Policy and prospects for its enhancement

Under the New Southbound Policy (NSP) launched by President Tsai Ing-wen in September 2016, Taiwan has been engaging in a wide range of deliberations with countries in South Asia, Southeast Asia, and the South Pacific. The initiative originally targeted the 10 members of the Association of Southeast Asian Nations (ASEAN), six countries in South Asia (India, Pakistan, Bangladesh, Nepal, Sri Lanka, Bhutan) as well as Australia and New Zealand for promoting bilateral partnerships and exchanges of talent, capital, technology, culture and education.[13] According to one of the latest publications of the Taiwanese government, “The New Southbound Policy encompasses four main aspects: economic and trade collaboration, people-to-people exchanges, resource sharing and the promotion of institutional links. The initiative does not seek to advance Taiwan’s geopolitical stature or influence, but intends for Taiwan to play a proactive role in the region through multifaceted cooperation, with mutual benefit and prosperity being key”.[14] The said publication is carefully making the following clarification:

“The New Southbound Policy does not aim to compete with China’s One Belt One Road, which is focused on improving regional infrastructure; Taiwan’s projects are all about people and soft power, supporting tourism, education, healthcare, technology, small and medium enterprises, and agriculture.”

It should be noted that the 11 January 2020 election results would give a new chance to Taiwan to boost its NSP and expand it further to the western hemisphere.

There are certain common points between NSP and Turkey’s “Asia Anew” policy. Turkey’s new policy was explained in an article published in AVİM’s Eurasian World journal as follows:

“In August 2019 at the 11th Ambassadors’ Meeting of the Ministry of Foreign Affairs of Turkey, the Minister of Foreign Affairs Mevlüt Çavuşoğlu announced Turkey’s new policy towards Asia: Asia Anew. With Asia Anew policy, Turkey aims to approach Asia in a ‘holistic’ manner, and as such, traditional bilateral relations will constitute only a portion of Turkey’s activities concerning the region. Turkey reportedly aims to utilize the state and the private sectors, universities, and civil society at the same time. In line with this, the Asia Anew policy rests on the following four pillars: “1) Improvement in interstate relations, 2) Expanding trade capacity of the private sector, 3) Improvement of academic cooperation, 4) Development of interaction between the societies.”

All these strategies mentioned above are pursued by the countries whose administrations are constitutionally bound by the basic principles of democracy, rule of law, and the market economy. It is possible to say that continuing to pursue policies such NSP may bring Taiwan more close to the group of countries that value democracy and the rule of law as basic principles of their administrative systems.

We are living in a world with increased connectivity among countries and between regions. The world is surpassing the Cold War modalities of international relations. It does not seem possible anymore to manage and deceive the younger generations with old bigoted thoughts. If any government tries to maintain the oppressive management style administration under the guise of bringing economic prosperity and prefers to set aside the rule of law, the young generations are bravely rebelling against the oppression. They loudly say “enough is enough”. We have been witnessing more examples of this behavior pattern recently all over the world. The antidote to this dilemma, to my mind, is not stucking into dogmatic thoughts but to develop constructive approaches for forming common understanding among people which address the  new circumstances without totally excluding the certain realities of old dogmas. Indications point out that social construction of contemporary reality has the potential to overcome the dogmatism, bigotry and intimidation policies in the first half of the twenty-first century.

[5] “Message to Compatriots in Taiwan” (The Standing Committee of the Fifth National People’s Congress, January 1, 1979), http://german.china.org.cn/english/taiwan/7943.htm.