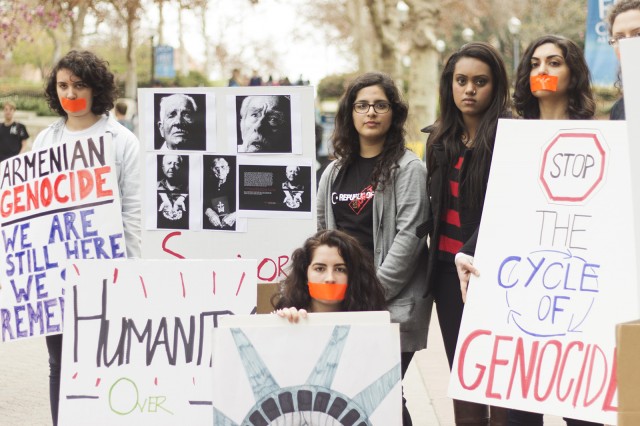 The California State Assembly voted on June 1, 2017, to cease continued investment in Turkish government bonds. This decision is the latest salvo of the Divest Turkey campaign headed by the Armenian Revolutionary Federation and associated organizations.

The Divest Turkey campaign began in December, 2014, initially headed by the Armenian Youth Federation (AYF). Its efforts resulted in the student bodies of the nine constituent schools of the University of California passing motions calling on their respective schools to end investment in Turkey. The AYF explains the campaign’s aim as ensuring divestment in Turkey until “reparations for the Armenian Genocide are met and until genocide is no longer a profitable venture.”[1] The organizations involved in the aforementioned campaign have also sought to censor alternative views on campus. Baylor University Professor George Gawrych was prevented from presenting his latest research on modern Turkish history by a group of students associated with the AYF at two Californian universities in November, 2016.[2]

The ‘Divest Turkey’ campaign has spread beyond university campuses and has been picked up by the AYF’s parent organization, the Armenian Revolutionary Federation, and the largest Armenian lobby organization, the Armenian National Committee of America (ANCA). During the first months of 2015, Armenian assembly members Adrin Nazarian and Katcho Achadjian began efforts to introduce a bill to the California State Assembly to ensure that the State of California would cease investment in Turkey.

Writing in the Sacramento Bee in April, 2015, the aforementioned assembly members stated that California, as the home to the largest Armenian population in the world outside of the Republic of Armenia, had a “moral obligation to divest from Turkey,” continuing by stating that efforts to discourage investment in Turkey would be a “powerful statement to the world,” and would ensure that California is not “enabling Turkey’s efforts to depopulate the Middle East of its Christians, Jews, Kurds and other religious minorities.”[3]

This article was published in relation to Bill AB-1410 which had been introduced by assembly members Nazarian, Achadjian, and Wilk in February, 2015. This bill took the form of an act to amend Section 16642 of, and to add Section 7513.75 to the Government Code relating to investments. In sum, the bill stipulated that the State of California would cease continued investment in Turkish government bonds. It called for section 7513.75 to be thereafter cited as the “California Public Divest from Turkey to End the Perpetuation of the Armenian Genocide Act.”

The text of the bill recorded that the State of California’s aforementioned investments number “several hundred millions.” The bill specifically targeted the California’s Public Employees’ Retirement System (PERS) and State Teachers’ Retirement System (STRS) assets held in Turkish government bonds. The text of the bill also recorded the claim that the investment of the aforementioned bodies in Turkey perpetuated the “campaign of denial” surrounding the events of 1915, by allowing Turkey to “reaps profits while actively denying the Armenian Genocide,” while also “funding its continued campaign of denial.”

A similar bill (AB-1597) but with several crucial differences was introduced by assembly member Nazarian on February 17, 2017. A crucial difference when compared with the previous bill was that AB-1597 was stipulated to become active “within six months of the passage of a federal law imposing sanctions on Turkey.” If the bill is accepted by the California State Senate and Governor, the decision will effectively remain suspended until such a time that the Federal Government imposes sanctions on Turkey.

Another indication of assembly member Nazarian’s changed strategy was the inaccurate political claims contained in the revised version of the bill. The revised text contained the claim that in Turkey, “any scholar, journalist, or other person” who mentions the “massacre and deportation of Armenians in 1915 to 1923” is subject to criminal prosecution. It must be noted that in Turkey various publishing houses such Belge and İletişim regularly publish critical works on the Armenian issue, and there exists a lively civil society that is critical of what it terms the ‘official narrative’ on the Armenian question. The revised bill further invoked genocide as defined by the United Nations,[4] and contained a vague call upon Turkey to “end all forms of religious discrimination and persecution.”

AB-1597, referred to as the Divestment from Turkish Bonds Act, was passed by the California State Assembly on June 1, 2017. Commenting on the decision, assembly member Nazarian stated that if “Turkey continues to fund Armenian Genocide deniers,” then Turkey must be “financially punished.”[5] He further claimed that “California’s investment in Turkish government bonds indirectly subsidizes Turkish denial of the Genocide.” The same article described the passing of the bill as a cause “long championed” by Armenian political parties and lobby groups.[6]

It must be emphasized that the statements from Armenian political organizations and lobby groups are misleading. The Divestment from Turkish Bonds Act, as outlined above, will not be implemented unless the federal government takes a decision to impose sanctions on Turkey. The bill has yet to be approved by the California State Senate and Governor. Crucially, in the case that the bill becomes law, the victory of the Armenian lobby will be entirely symbolic without the passing of a similar law by the Federal Government.

The systematic efforts of the Armenian lobby and associated organizations to convince law makers to impose sanctions on Turkey is a relatively recent development. When then Turkish Prime Minister Recep Tayyip Erdoğan visited Washington in 2013, both the Greek and Armenian lobbies issued a statement which called for "strict legal conditions" to be placed on trade deals involving Turkey. The statement continued by calling on Turkey to end both its “unlawful and brutal military occupation of Cyprus, where human rights and religious freedom are routinely violated,” and for an end to the “illegal economic blockade of Armenia.”[7] Greek and Armenian lobby organizations raised similar objections in 2011 to the US House Committee regarding Turkey’s investments in the United States. Among the objections raised were allegations that Turkey remains an “unrepentant perpetrator of genocide against millions of Armenians, Greeks, and Assyrians,” and is a country which “threatens U.S. commercial interests in the Mediterranean region,” which also “continues to blockade Armenia, occupy Cyprus, confront Israel, attack Kurds, and undermine US regional interests.”[8]

The previous cooperation of various ethnic lobbies against Turkey in recent years has become solidified in the recent disinvest campaigns.[9] The AYF has similarly noted that the campaign is working towards “building a coalition with other ethnic and political organizations.”[10] This development is indicative of broader cooperation between various groups which have grievances with Turkey.

The aforementioned lobby groups have also attempted to capitalize on disagreements between Turkey and its allies on matters of foreign policy by launching social media campaigns questioning the viability of Turkey as an ally of the United States, and by jointly protesting the recent visit of Turkish President Erdoğan to Washington DC.[11] The recent condemnation by the US House of Representatives of the disturbances which took place outside the residence during the aforementioned visit was welcomed by Aram Hamparian, the head of ANCA. Hamparian noted that the US had “turned a corner” regarding its foreign policy towards Turkey, further stating that the US’s previous policy towards Turkey was constituted by “turning a blind eye to its genocidal horrors, abuses at home, and aggression abroad.”[12] Hamparian had also testified before the House Foreign Affairs Subcommittee on Europe on the same issue. In the course of his testimony, Hamparian called for the immediate expulsion of Turkey’s ambassador to the United States and raised the issue of what he termed Turkey’s “genocide against Armenians, Greeks, Assyrians, and other Christians.”[13]

It must be asked what, if anything, is gained by the passing of entirely symbolic bills by lawmakers influenced by the Armenian lobby. The perpetual conflation of historical issues with present day political debates has served to entangle legislators, lobbies, embassies and ministries of foreign affairs in wrangling over entirely symbolic issues. These activities have resulted in not only damaging of relations between countries, but also serve to perpetuate the Armenian’s sense of injustice as their current strategy cannot, by its very nature, return long-term dividends.

[4] For a discussion of the problematic use of the term genocide in relation to the Armenian issue see Pulat Tacar and Maxime Gauin, “State Identity, Continuity, and Responsibility: The Ottoman Empire, the Republic of Turkey and the Armenian Genocide: A Reply to Vahagn Avedian,” The European Journal of International Law 23, no. 3 (2012): 821–35.