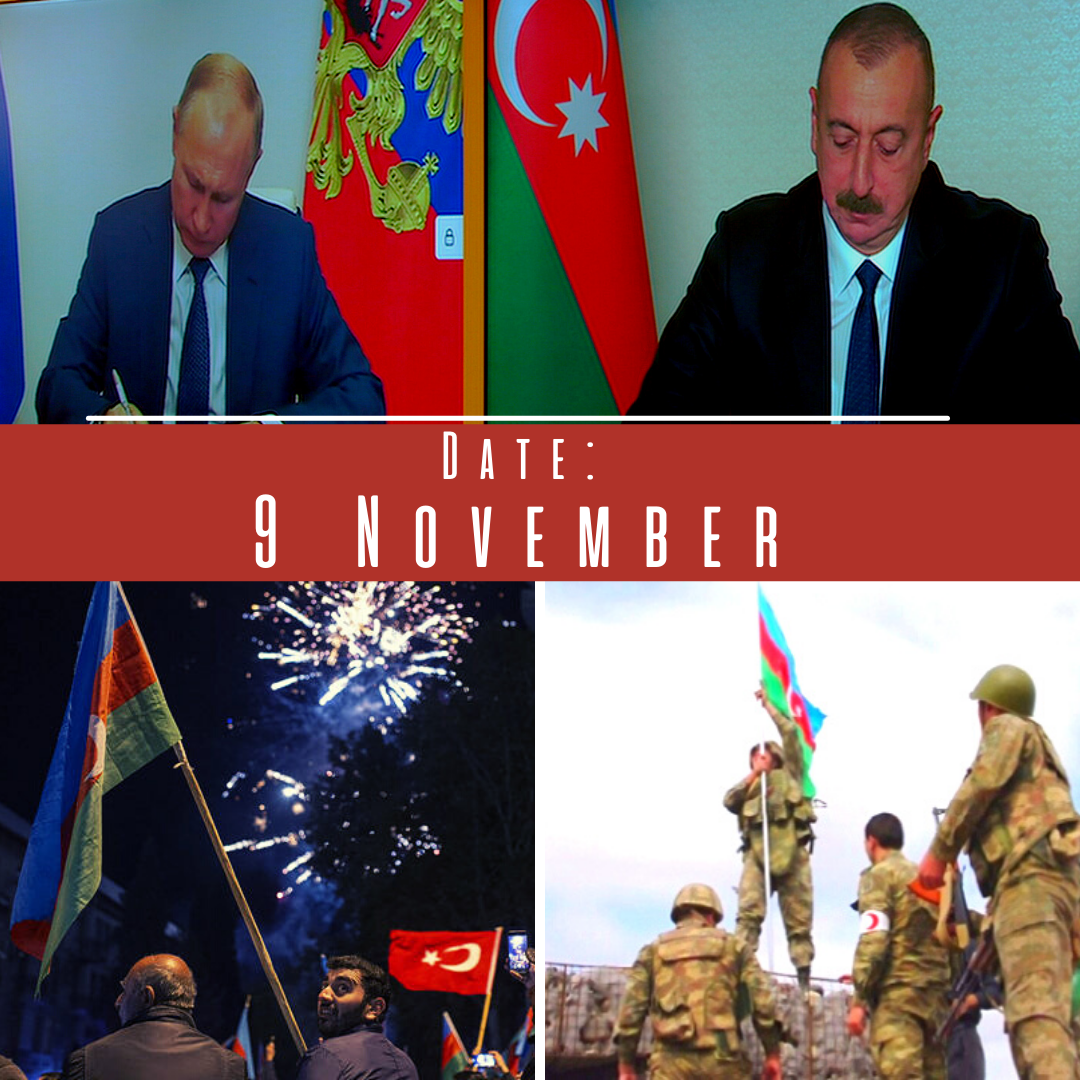 2020 witnessed an important development for the Caucasus region. The 30 years-long occupation of Azerbaijani lands was halt and Shusha as well as the 7 regions surrounding Karabakh are now back under Azerbaijani control. As it will be remembered, populist rhetoric on Nagorno Karabakh increased in Armenia throughout 2019 and statements, such as Nakhchivan also being the historical land of Armenia, were uttered by Armenian officials[1]. Similarly, Armenian Prime Minister Nikol Pashinyan said “Karabakh is Armenia. Period.” The Minsk Group’s silence against this statement damaged Azerbaijan’s belief in that a solution on the Nagorno-Karabakh issue could be achieved through diplomacy[2]. The 4-day clashes that took place in Tovuz, Azerbaijan on July 2020, also intensified the threat perception of Azerbaijan. The large-scale operation titled “iron-fist” launched by Azerbaijan on 27 September 2020 was not a surprise considering all these developments. The conflict ended after 44 days and a ceasefire was established.

During the 44-day conflict, three separate attempts were made to re-establish the ceasefire regime, but these ceasefires did not last long. This was the case until Azerbaijan regained control of the historical city of Shusha, one of the most important cities of the Nagorno-Karabakh region. Taking control of the strategically located city of Shusha was extremely effective in the ending of the operation, as it was situated on the supply routes of the ethnic separatist forces of Armenia in Nagorno-Karabakh and there was no alternative. Following the personal initiative of Russian President Vladimir Putin, a ceasefire regime was re-established between Azerbaijan and Armenia.

The end of the occupation as a result of the successful operations of Azerbaijan was an extremely important development, not only for the Armenian-Azerbaijani conflict, but also for the establishment of regional peace. The memorandum of understanding, signed after the operations ended with the mediation of Russia on November 9, 2020, became an important milestone for the establishment of a new era in the South Caucasus. For this reason, it would be appropriate to take a brief look at the last one-year process.

Where are we on the 9 November  Statement?

It can be said that the ceasefire regime established on 9 November has significant differences from the previous ones. First of all, the ceasefire regime was established by only between the two countries. That is the difference between the ceasefire and the previous Bishkek protocol. It revealed the fact that Azerbaijan has been defending for years; the occupying power in Nagorno-Karabakh was not the Armenians from Nagorno-Karabakh, as claimed otherwise, but Armenia itself. With the 9 November  agreement, it was recorded that the parties were only Armenia and Azerbaijan.

In addition, there was no detailed roadmap in the ceasefire regimes established before. However, in the joint text announced by all parties present on November 9, determinations were made regarding the withdrawal dates of Armenia and ethnic separatist forces from the occupied 7 regions. According to the agreement; the Aghdam region was to be handed over to Azerbaijan[3] on 20 November (article 2[4]), the Kalbajar region on 15 November (article 6[5]) and the Lachin region on 1 December (article 6[6]). As a matter of fact, on November 20, the Armenian soldiers and separatist forces withdrew and left Aghdam under Azerbaijani control[7]. Compliance with the schedule was a very important indicator for the future of the tripartite agreement.

However, the withdrawal from the Kalbajar region, which was agreed to be given back by 15 November, by the Armenian forces, and the evacuation of residents of Armenian origin was postponed until 25 November. The turmoil that arose during the evacuation of the region, as the Armenian residents burned their own houses, moved the graves of their relatives, and evacuated the belongings in the churches, while leaving the settlements, came into play in the extending of this period[8]. The evacuation procedures, which were carried out under the control of the Russian Peacekeeping Force (article 3) in accordance with the ceasefire agreement, were completed on November 25 and the Kalbajar region was handed over to Azerbaijani control[9]. Lachin, on the other hand, was returned to Azerbaijan under the control of the Russian peacekeeping force as per the agreement[10].

The Russian peacekeeping force, which was deployed in accordance with Articles 3 and 4 of the agreement, has been deployed in the parts of the Nagorno-Karabakh region close to the Azerbaijani side, concentrated around the Lachin corridor as of 8 November[11]. Patrols are being carried out on the Shusha (Shushi), Hocavend/Red Bazaar (Martuni) -Sukovuşan (Magadiz) lines[12].

The foundation of the peacekeeping center, which was planned to be established in accordance with the agreement, was started with the opening of Turkish-Russian joint monitoring center[13].

Military activities, such as the provision of transportation between Armenia and Khankendi by Russia, supervising the return of the Armenians who had to leave their homes, accompanying those who go to visit the churches, and patrolling to monitor the ceasefire, are carried out in the areas under the control of the peacekeeping force[14]. It is known that, in addition to the protection and patrol activities, the peacekeepers carry out social aid activities in schools in the region. While the activities aimed at the Armenian people regarding the return of displaced citizens in accordance with Article 7 of the 9 November agreement continue, no arrangements have been made yet for the return of the Azerbaijani residents who had to flee the region during the First Karabakh War.[15]

The exchange of prisoners of war, which started on December 15, 2020 in accordance with Article 8 of the agreement, is progressing slower than planned due to the Armenian side's unwillingness to deliver the mine maps placed in Nagorno-Karabakh and the tensions in the border region between the two states. The most important development in this regard was the sending of 17 prisoners of war from Azerbaijan to Armenia in return for the land maps of mines delivered by the Armenian side after the meetings held under the mediation of Georgia on 12 June[16].

On the other hand, work on the reopening of the roads to Nakhchivan, which is of great importance for Turkey as well as for Azerbaijan, has not been completed yet. Although the joint will on this issue was expressed with the declaration announced after the meeting of Putin, Ilham Aliyev and Nikol Pashinyan on January 11, 2021, a transportation route to Nakhchivan via Zangezur has not been opened for use yet. The working group determined within the framework of the joint declaration continues to work. It is understood from the last statements of Armenian Prime Minister Nikol Pashinyan that the working group is working on certain routes. It is understood that the possible routes for the roads are being shaped around the roads used in the past; such as the Icevan-Kazah line (R13 and H37 highways), , Berd-Tovuz line, Angeghakot-Bichanak line (E117 highway), Horadiz-Meğri, Ordubad, Horadiz line (E002)[17]. Armenian Prime Minister Nikol Pashinyan stated in an interview with an Armenian television channel on 8 November that they are in favor of opening the Yeraskh-Ordubad-Megri-Horadiz railway. Emphasizing that the Zangezur corridor is intended to be completely under the sovereignty and control of Armenia, Pashinyan also pointed out that the international contributions of the road in question cannot be denied. Regarding these statements of Pashinyan, it can be interpreted that the efforts to persuade the Armenian society out of their prejudices about the Nakhchivan corridor are continuing. But of course, the efforts made since the November 9 agreement on paving the way for Nakhchivan are promising.

Even though the ceasefire and the road map determined within the framework of the ceasefire on 9 November 2020 between Azerbaijan and Armenia have not been completed yet, it continues to be implemented. On the other hand, the shootings that are taking place on the border between Azerbaijan from time to time caused the border discussions between the two countries to intensify, which was inherited from the Soviet Union period. Efforts to determine the borders between the two countries continue under the leadership of Russia. It can be thought that the determination of the border will be followed by the establishment of a permanent peace agreement. However, a platform for a permanent peace treaty has not been established yet. The proposal of Turkey and Azerbaijan was the establishment of a 6-country platform consisting of South Caucasus Countries + Iran + Russia + Turkey. However, due to the current situation between Georgia and Russia, Iran's skeptical foreign policy approach and Armenia's attempts to re-include the OSCE Minsk group in the process, no progress has been made yet.

However, when the steps taken in a short period of one year are evaluated, it can be said that effective steps have been taken on many issues that have not been improved for years.