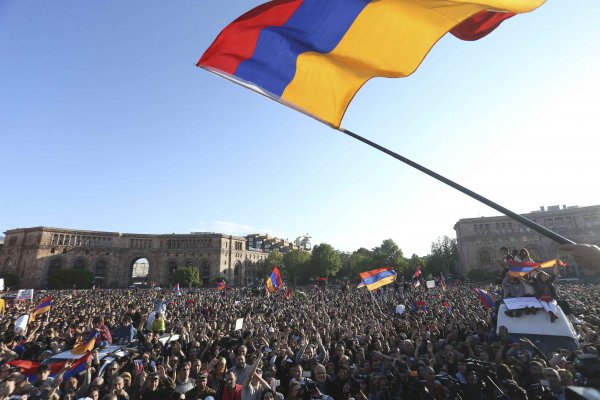 Past April witnessed perhaps the most important events for Armenia since the fall of Soviet Union. The movement which started in Gyumri on March 31st by Nikol Pashinian, the leader of Civil Contract Party from the Yelk (the Way Out) bloc, evolved into the mass demonstrations unexpectedly. The target of the demonstrators was Serzh Sargsyan himself. However, Armenian citizens have actually reacted to economic and social conditions that they had to endure for years. Therefore, Serzh Sargsyan was targeted as an important representative of this ancient and corrupt system. The process leading to the resignation of Sargsyan on April 23rd 2018, and expectations for Armenia's future requires a detailed analysis, which will be provided below.

Events of March 1st which took place after the election of Sargsyan as the president in 2008 can be seen as one of the reference point of demonstrations in Armenia at present.  It may be remembered that the nomination of Sargsyan for the presidency in 2008 and the strong opposition of his rival Levon Ter-Petrosyan triggered the events in which 10 people lost their lives[1]. Levon Ter-Petrosyan, first president of Armenia, named Kocharyan and Sargsyan as “Karabakh Clan” and defended that they put other interests in front of Armenia’s own interests. [2] He said that Armenia was handed over to the oligarchs by Armenian Republican Party, and Sargsyan would continue this system.[3] Following the election of Sargsyan as president, street protests began in response to electoral fraud as well as the call of Petrosyan.[4] Commentaries in those days stressed that the demonstrations might turn into a color revolution.[5] Kocharyan government who had not yet transferred his duty to Sargsyan declared a state of emergency and suppressed demonstrations by using disproportionate force. One of the leaders in that protests was Nikol Pashinian.[i]

In 2008, Pashinian who was the supporter of Ter-Petrosyan often criticized Kocharyan and Sargsyan administrations for being pro-Russian.  He added that Armenia's dependence on Russia should be reduced.[6] He strongly criticized the policies of the Republican Party through a newspaper "Haykakan Zhamanak" of which he was the editor in chief. After the events of March 1st, a warrant issued for the arrest of Pashinian on grounds that he provoked the people to create disorders. Initially, Pashinian hid for a while, and in 2009 he turned himself in to the authorities.[7] He stayed in jail until 2011 and he entered the politics in 2012.

Protests against Referendum in 2015/ No Pasaran Movement

In 2015, Armenia was a stage for mass demonstrations once again. There were plans to hold a referendum for changing of the presidential system to the parliamentary system by amending the constitution of Armenia. With those changes, the Armenian prime minister has been equipped with the powers previously held by the Armenian president. The fact that the amendments in the Constitution would be implemented in 2018, the year in which Serzh Sargsyan's term expires, was quite remarkable. During the calls made by the opposition in November, Armenian voters were asked to reject the amendments in the referendum. The opponents remarked that Serzh Sargsyan wanted to introduces changes to the system merely to keep power in his own hands. According to the current Constitution of Armenia, one person could serve as president for only two terms.[8] However, Sargsyan who did not want to leave his monopoly on power would be able to extend his duty term with that amendment.[9]

The amendment which was approved by a 50.51 percent rate was protested widely in the country. Sargsyan said that he would not be a candidate as prime minister.[10] However, Sargsyan’s nomination for prime ministry after 3 years started the Velvet/April Revolution in 2018.

One can observe that Armenian society have been under duress due to a multitude of problems such as corruption, poverty, oligarchs’ influence on politics, foreign policy failures, lack of justice etc. but specifically complained about Serzh Sargsyan himself.  All movements like the March 1st, No Pasaran, and Electric Yerevan- emerged as a result of the increased electricity tariff in 2015- have paved the way for 2018 events. Armen Grigorian, one of the street leaders of Velvet/April Revolution said in an interview with Open Democracy that 2018 succeeded through lessons learned from the previous events.[11]

The protests of 2018 began with the march of Pashinian which was started from Gyumri to Yerevan a few days before the prime ministerial elections. The Armenian people were indignant against Sargsyan and the Republican Party for a long time. Therefore, the protests gained a massive character in a short period of time. Sargsyan’s resignation was demanded by the demonstrators who displayed an organized action for 13 days under chaotic conditions. In fact demonstrators wanted to mend the failures of the system. The idea that Sargsyan was the creator of this situation and lost the people’s support and should therefore leave his post began to be expressed frequently. These protests, which were initially not taken seriously by the government, subsequently turned into an element of coercion.

During the process, Armenian political scene witnessed some unusual developments. Nikol Pashinian and Sargsyan held a meeting in front of the TV channels. Sargsyan wanted the demonstrations to be ended. But Pashinian pointed out that they were there in order to discuss the terms of Sargsyan’s resignation. That represented a unique situation in politics both within Armenia and across the World. Sargsyan left that meeting after lashing out at Pashinian.[12]

The resignation of Sargsyan almost a day after this interesting meeting was a surprising development. Apparently, Sargsyan initially thought that he would suppress opposition as he did several times before, but later decided to resign as he realized that he could not do it as harshly as he did on March 1st. Following to meeting, Pashinian was taken into custody.[13] But he was released in a short time. So, Pashinian's standing as an opposition leader was strengthened in the eyes of the people.

On April 22nd, some of the soldiers and police officers sided with demonstrators unexpectedly.  Following this, further events took place rapidly, and Serzh Sargsyan who served as the president of Armenia for a decade resigned on April 23, 2018.

The demonstrations which ceased for a while after Sargsyan’s resignation started again on May 1st when Pashinian was not elected as prime minister in the parliament.[14] The Republican Party did not keep its word despite the fact that they had publicly announced that they would not nominate any candidates but would support Pashinian. The attitude of the party, largely formed by oligarchs from Karabakh, triggered a wave of unrest throughout country once again. Pashinian made a call to return to the streets, and opposition groups responded positively to that call.

The situation in Armenia is still not fully calm. Pashinian was elected as a prime minister on May 8th. So far he has not gone beyond the anti-Sargsyan rhetoric and he lacks administrative experience. Therefore, it still remains unclear what kind of policies Pashinian will be adopting.

So, What Is Next?

Pashinian was elected with the help of the party led by Sargsyan. But the chair number of Yelk bloc is not enough to take important decisions. The Republican Party holds the majority in the parliament even if Ter-Petrosyan’s party would have supported Pashinian. This means that even if Pashinian is the prime minister, domestic and foreign policy will also depend on the Republican Party in other words the representatives of the old system. Pashinian’s recent statements also indicate that a new election will not be held in the near future. But a possible early election could have meant that the Republican Party's chair number could be reduced. The balance of representation in the parliament needs to be fairer to reflect the will of the Armenain people and to introduce the changes demanded by them.

Throughout this process, Pashinian was careful enough to convey messages to the representatives of Russia, EU, and USA that these demonstrations do not represent anti-Western or anti-Russian current. He remarked that these developments were Armenia's internal issues. Pashinian’s attitude, which is not quite as harsh as previously especially against Russia when Pashinian was in the opposition, shows that he fears from a possible Russian intervention. However, the low level reaction from Russia shows that such intervention seems unlikely at least for the time being.

The Syrian-based tension between the US and Russia is one of the main issues of Russian foreign policy nowadays. It seems that Russia wants to be more careful against the demonstrations that started in Armenia a day after the US-French coalition bombed Syria. On the other hand, it can be seen that Russia, which had previously faced problems regarding its influence due to the colored revolutions, appears to be more cautious.

The timing of the protests also leads to comments that there may be geopolitical effects behind these events. Some Russian experts, who previously suggested that the colored revolutions in Georgia and Ukraine had been supported from outside, claimed that there might be a similar situation in these events in Armenia. The fact that some Soros-funded NGOs in Armenia supported Pashinian led to the increase of these allegations. However, these allegations continue to remain as allegations since there is no exact information.

Looking at the issue from the Armenian people’s perspective, one can see a clear victory against Sargsyan and the oligarchs. Leaving Pashinian's questionable political identity and program aside, Armenian people have to pursue their demands for the sake of the development of Armenian democracy. In order to solve the problems in the domestic politics, it is necessary to change foreign policies which were implemented at expense of Armenia’s own interests.

[i] Acording to Leaked correspondence of American Embassy , Pashinian was identified as an unconstructive radical figure in the comments of March 1 (https://wikileaks.org/plusd/cables/08YEREVAN267_a.html)