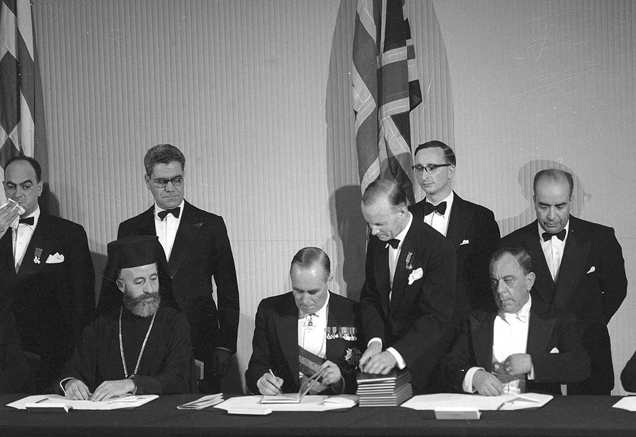 It was reported in the Greek press that the International Coordinating Committee Justice for Cyprus (PSEKA) will host an online event on September 30, to celebrate the 60th anniversary of the independence of the "Republic of Cyprus". According to the report, the keynote address at the event will be given by “Cyprus President Nicos Anastasiadis”. Guest speakers, among others, will be Ranking Democrat in the Senate Foreign Relations Committee US Senator Bob Menendez, House Foreign Affairs Committee Chairman Rep. Eliot Engel, House Middle East Subcommittee Chairman Rep. Ted Deutch, and American Jewish Committee CEO David Harris[1].

On this occasion, it is necessary to briefly remember the historical background of island of Cyprus, how the "Republic of Cyprus" was founded in 1960, and how it turned into a defunct entity in three years.

During the reign of the Ottoman Empire, the Greek Orthodox faith was restored, and the Archbishop was acknowledged as the leader of the Greek Orthodox community. In this period, the Greek Cypriots attained the right to administer their own affairs under the millet system of the Ottomans. However, the Greek War of Independence in 1821 gave rise to Greek nationalism in Cyprus, resulting in the revival of Hellenistic megali idea (great idea of reviving the extinct Byzantine Empire) that paved the way for the Greek Cypriot demand for enosis, which is union with Greece.

After inflicting much pain in the island to achieve enosis, the Greek government and the Greek Cypriots realized at the end that neither Turkey, the Turkish Cypriot people, the UK, nor the UN would consent to the union of Cyprus with Greece. Hence, a negotiated settlement remained the only way in the late 1950s in a world where colonies were becoming independent one after another. The UK expressed its readiness to transfer sovereignty jointly to the Turkish and Greek Cypriot peoples for the creation of an independent, partnership state in Cyprus. To achieve this, the UK insisted on retaining sovereign bases in Cyprus and safeguarding the rights of both Turkish and Greek Cypriots. Besides, the UK maintained that she should have the right to intervene along with Turkey and Greece, if there was an attempt to alter the agreed state of affairs.

Against this background, talks were initiated between the Turkish and Greek governments, with the knowledge of the two sides in Cyprus. These talks led to the Zurich Agreement of 1959 which soon afterwards was endorsed in London between five parties, namely, Turkey, Greece, the UK, Dr. Fazıl Küçük on behalf of the Turkish Cypriot people, and Archbishop Makarios III on behalf of the Greek Cypriot people (see photo above). On this basis, the constitution of 1960 was negotiated, and the Treaties of Guarantee, Alliance and Establishment were concluded. When the five-party Treaties were signed, the UK transferred sovereignty to the two peoples on the island. Thus, the Republic of Cyprus came into being as an independent partnership state in 1960.

It was hoped that the Turkish Cypriots and the Greek Cypriots, as the two peoples of the island and new partners, would be able to live peacefully together. But this expectation was not fulfilled. The Greek Cypriots and Greece did not give up their ambitions and designs. They regarded independence merely as a springboard for annexation of the island to Greece. The Greek Cypriot leadership continued to campaign for this objective and sought to unlawfully bring about constitutional amendments which would negate the partnership status of the Turkish Cypriots.

Since the pursuit of such goals were prohibited under the constitution and the guarantee system of 1960, they could only be achieved by defying and destroying the legitimate order. This meant the use of force to overtake the partnership state and to force the other partner into submission. The Greek Cypriot and Greek designs and the use of force to achieve their unlawful aims led to the collapse of the partnership system. As a result of the Greek Cypriot armed attacks, the bi-national Republic, as envisaged in the international treaties, ceased to exist in December 1963. It should be mentioned in this context that many Turkish Cypriot civilians lost their lives during the tragic events of 1963. The breakaway Greek Cypriot wing of the partnership state usurped the title of "Government of Cyprus"[3].

In a very recent article published in the Cyprus Mail newspaper, which is in circulation in the Greek Administration of Southern Cyprus, penned by Alper Ali Riza (a Queen’s counsel in the UK and a retired part-time judge), it was stated that “it is no secret that Makarios cherry picked the constitution for amendment with suspect haste after independence”. The author of the article states that after all these developments “Republic of Cyprus became and remains exclusively Greek Cypriot”[4].