ANZAC DAY: “THERE IS NO DIFFERENCE BETWEEN THE JOHNNIES AND THE MEHMETS TO US WHERE THEY LIE SIDE BY SIDE” AT GALLIPOLI. IS THIS THE CASE FOR OTHER COUNTRIES?
Analysis No : 2019 / 13
Author : Teoman Ertuğrul TULUN
30.04.2019
9 min read 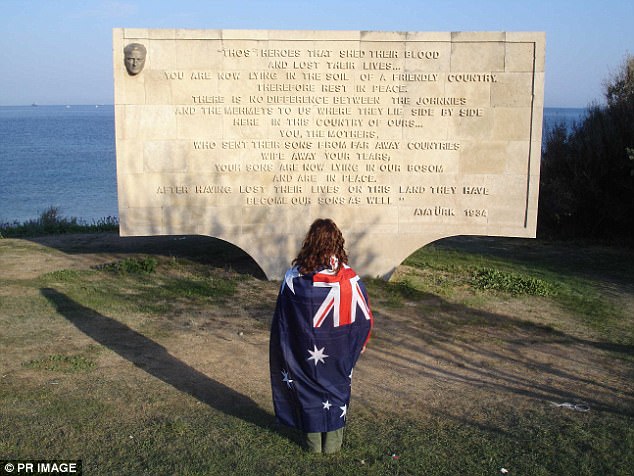 As reported in the Turkish newspapers published in English, more than 1,200 visitors from Australia and New Zealand attended the dawn service in Turkey's Çanakkale province in the early hours of 25 April 2019 to commemorate the 104th anniversary of Australian and New Zealand Army Corps’ (ANZAC) landing on Turkish soil at the Gallipoli peninsula.[1] This landing took place in the ninth month of the First World War. April 25 is also known as ANZAC Day in Australia and New Zealand.

How does the Australian Government consider the Anzac Day?

“The Anzac tradition—the ideals of courage, endurance and mateship that are still relevant today—was established on 25 April 1915 when the Australian and New Zealand Army Corps landed on the Gallipoli Peninsula.

It was the start of a campaign that lasted eight months and resulted in some 25,000 Australian casualties, including 8,700 who were killed or died of wounds or disease.

The men who served on the Gallipoli Peninsula created a legend, adding the word ‘Anzac’ to our vocabulary and creating the notion of the Anzac spirit.

In 1916, the first anniversary of the landing was observed in Australia, New Zealand and England and by troops in Egypt. That year, 25 April was officially named ‘Anzac Day’ by the Acting Prime Minister, George Pearce.

By the 1920s, Anzac Day ceremonies were held throughout Australia. All States had designated Anzac Day as a public holiday. In the 1940s, Second World War veterans joined parades around the country. In the ensuing decades, returned servicemen and women from the conflicts in Korea, Malaya, Indonesia, Vietnam and Iraq, veterans from allied countries and peacekeepers joined the parades.

During the 1960s and 1970s, the number of people attending the ceremonies fell as Australians questioned the relevance of Anzac Day. However, in the 1990s there was a resurgence of interest in Anzac Day, with attendances, particularly by young people, increasing across Australia and with many making the pilgrimage to the Gallipoli Peninsula to attend the Dawn Service.”[2]

What is the meaning of Dawn Service for Australians?

The same website explains the meaning of “Dawn Service”, as written in the Australian War Memorial, as follows:

“The Dawn Service observed on Anzac Day has its origins in an operational routine which is still observed by the Australian Army today. The half-light of dawn plays tricks with soldiers' eyes and from the earliest times the half-hour or so before dawn, with all its grey, misty shadows, became one of the most favoured times for an attack. Soldiers in defensive positions were therefore woken up in the dark, before dawn, so that by the time the first dull grey light crept across the battlefield they were awake, alert and manning their weapons. This was, and still is, known as ‘Stand-to’. It was also repeated at sunset.”

Mustafa Kemal Atatürk’s following words inscribed on various Anzac memorial plaques concerning the soldiers who sacrificed their lives for their countries, from my perspective, represent a profound expression by a military commander and statesman who knew better than anybody else the grievances and sufferings of the Çanakkale wars in which nearly 60,000 Turkish soldiers sacrificed their lives in defense of the Turkish homeland against an invading multinational military force:

“Those heroes that shed their blood and lost their lives... You are now lying in the soil of a friendly country. Therefore rest in peace. There is no difference between the Johnnies and the Mehmets to us where they lie side by side here in this country of ours... You, the mothers who sent their sons from faraway countries, wipe away your tears; your sons are now lying in our bosom and are in peace. After having lost their lives on this land they have become our sons as well.”[3]

The spirit of the above words attributed to Atatürk is still valid today in Turkey. In fact, the following sentences in the message of the President of Turkey Recep Tayyip Erdoğan on the occasion of the Anzac Day are the sincere expression of this sentiment:

“On the 104th anniversary of the Çanakkale Land Battles, I remember with grace our hundreds of thousands of soldiers, martyrs and veterans, who defended their homeland and honor on these lands.

Today, we commemorate all soldiers, of all nations, who lost their lives in the Battles of Çanakkale.

I hope Çanakkale will set an example to all nations in transforming shared pain and suffering not into new enmities, but into a tool of friendship, love and peace.”[4]

Are there reciprocal sincere sentiments in the statements of certain third countries regarding Anzac Day?

In this year’s Anzac Day commemorations, the United States Secretary of State made the following press statement on 24 April 2019 concerning the Anzac Day:

“On behalf of the Government of the United States of America, I stand with all Australians and New Zealanders as you mark Anzac Day.

On this day, the 104th anniversary of the first landings at Gallipoli, we remember the sacrifices made by Australian and New Zealand service personnel during World War I. The heroic actions of courageous Australian and New Zealand men and women, side by side with Americans in the trenches of the Western Front and across the harshest deserts of the Middle East, helped build a world safe for freedom and democracy.

We acknowledge, too, the many brave Australian and New Zealand personnel, past and present, who have sacrificed and served to secure peace in the years since the Great War.

The bonds between Australia, New Zealand, and the United States remain strong and steadfast. Each day we collaborate to preserve the freedom and security of the Indo-Pacific region and around the globe. We join our Australian and New Zealand friends on this Anzac Day to reflect solemnly on the historic legacy of the Great War and the brave servicemen and women who fell to protect their nations and the freedom and security of their fellow citizens.”

In fact, after the First World War began in 1914, the United States proclaimed a policy of neutrality and declared a war after two and a half years in April 1917 against Germany and then against Austria-Hungary.[5] However, since the Ottoman Empire had never taken any hostile actions against the US, and its troops were not engaged in Italy or on the Western Front, the US did not declare war against Ottoman Empire. There is no such registration in the US Senate of War Declarations.[6]

In this respect, it is quite interesting and puzzling not to see a single mention in the US Anzac Day press statement of the US Secretary of State to the thousands of Turkish soldiers who lost their lives in defense of their homeland. The historical fact is that the multinational military troops, including the ANZAC troops, who landed on Gallipoli peninsula were literally invaders of the Turkish homeland. In this respect, it is natural for the people of an US-allied country such as Turkey to expect a mention to its soldiers in the US press statement regarding the Anzac Day.

There is no mention at all to the Turkish soldiers who lost their lives in Gallipoli also in the website of the US Embassy in Ankara. In the Twitter account of the US Embassy, it was posted on 26 April 2019 in Turkish that the US Chargé d’Affaires, together with the diplomats from the Embassy and the US Consulate General in Istanbul, joined the US’ Australian and New Zealander allies in the Anzac Day Dawn Service in Çanakkale. In the same tweet, the US Embassy also retweeted the US State Department of Asia Pacific Bureaus’ tweet that included the public statement of the US Secretary of State on Anzac Day.[7]

At least to be respectful to Turkish local staff working at the US Embassy and Consulate in Turkey, it would have been diplomatically and morally thoughtful to mention in the US Embassy tweet the Turkish soldiers who sacrificed their lives at Gallipoli and the Çanakkale Wars. The lack of such a mention reveals that the US government neither has a proper understanding of the sensitivities of its ally, Turkey, nor does it have a proper understanding of the humanitarian spirit of ANZAC Day.