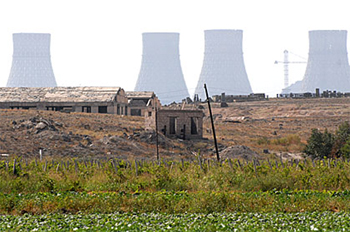 Medzamor Nuclear power plant (Medzamor NPP) which was built by the Soviet Union in 1977 is a very contradictive issue. It is located near the Armenia-Turkey border, 36 km away from Yerevan province and 16 km away from Iğdır.[1] For this reason, the security of Medzamor NPP is crucial for Turkey, for other states in the region and even for Europe as well Armenia.

When we focus on the common characteristic of the Fukushima and Chernobyl nuclear accidents that occurred in the recent past, we see that both of these NPP’s were built in 1970s. Fukushima NPP was brought into service in 1971 and Chernobyl NPP was in 1977 which is the same year that Medzamor NPP was put into service. These power plants are called first generation power plants.[2]  After operating about 40 years, Fukushima NPP leaked radiation in 2011 due to a failure in the cooling system of the reactors which were damaged during the earthquake and tsunami in Japan. That accident had occurred in spite of the increased security measures taken to extend the NPP’s life. After that accident, the threat posed by Medzamor NPP was brought to the agenda once more.

Medzamor NPP is located on the Mount Agri fault line. Medzamor NPP was shut down according to the security concerns in 1989 after the Spitak earthquake which had occurred near Gyumri in 1988 and was recently commemorated.[3] However, it was decided to reopen it because of serious energy shortages in Armenia. Therefore, in spite of all the dangers, the power plant was re-opened in 1993 with a few minor improvements. The Van earthquake occurred in Turkey in 2011. Experts said that there have been some tectonic changes in the region after the Van earthquake.[4] The effects of these changes on the Mount Agri fault line on Medzamor are not known yet.

In its recent history, Turkey experienced a nuclear disaster caused by Chernobyl NPP which was built in 1977. Nine years after its construction, Chernobyl NPP turned to a nuclear disaster which affected many countries terribly, including Turkey. After the Chernobyl incident, the operation of a third and fourth reactor of Medzamor was forbidden, despite that it was initially planned to operate with 4 reactors.[5] Thus, any accidents that may occur in this nuclear plant which is located in such proximity can cause fatal effects.

It is stated that the technical life of nuclear power plants can be increased 40 years to 60 years and even up to 80 years through the critical improvements made and high security measures taken.[6] However, the fact that the disasters like Fukushima, which happened in spite of all safety protocols, could happen at the Medzamor NPP due to its current poor conditions is causing both national and international concerns. In fact, there are debates in the U.S. and Europe whether the first generation nuclear power plants are safe or not.

In 2011, Armenia applied to the International Atomic Energy Agency (IAEA) for an extension of NPP’s license to 2021 with the promise of renewing the facility by taking precautions in compliance with the international standards. This license extended in 2016 as pursuant to IAEA rules but with a condition that they have to report annual security indicators. The Paper published by IAEA in 2016 showed that Medzamor NPP needs to be renewed regularly for long-term service.[7]

In 2011, the European Union (EU) launched an investigation process for the NPPs located in the region after the Fukushima accident. In this context, the report about Medzamor published in 2016 by the European Nuclear Safety Regulators Group established by the European Commission revealed that the emergency management plans of this plant, which is located in a region with a high earthquake risk, were insufficient. In addition, it is stated that Medzamor has a disadvantage in which it is not located in proximity with any hydro-source. If no improvements are made in its cooling systems, the risk of an accident occurring is high. It was recommended to carry out endurance tests as soon as possible.[8]

Article 42 of the Comprehensive and Enhanced Partnership Agreement (CEPA) signed with the European Union in September 2017 stated that the EU would cooperate with Armenia in the closure and decommissioning of Medzamor NPP in order to create nuclear security and that the earliest schedule would be made for this.[9] As it can be understood from the agreement, Medzamor NPP is disturbing the EU in terms of nuclear security. However, there is no target closing date for Medzamor NPP in CEPA. The planned action plan between Armenia and Euratom has not yet been made. The Armenian Nuclear Regulatory Authority made a second application to the IAEA for the extension of Medzamor's license period to 2026.[10] The report, which was prepared as a result of its investigations based on the reports of the IAEA in 2013 and 2016, stated that Medzamor NPP had made some improvements for the long-term license. It was reported that after the inspections in 2020, it would be determined whether or not the license would be renewed again.

Despite all the warnings of the EU and international organizations, the Armenian government insists on keeping the facility open. Although the concern of energy shortage underlying this insistence is understandable, the continuation of the activities of Medzamor in the current situation threatens the entire region including Armenia.  Medzamor NPP has completed its lifetime. The IAEA invites a possible disaster with tolerating the extension of the facility's license.

The Armenian administration prefers to perceive the absence of any date for the closure of Medzamor in the CEPA as a permit for Medzamor to work. Efforts should be made to use safe energy sources instead of Medzamor power plant. As a matter of fact, it is stated that new energy facilities will be established be in place of Medzamor in the framework of the CEPA signed with the EU. Armenia, which has the opportunity to provide for its energy needs more safely, will eliminate the biggest nuclear threat in the region with initiatives in this direction.