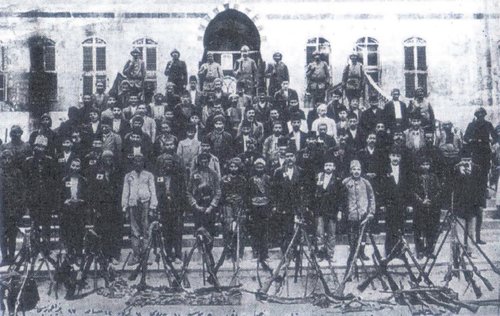 April 24th, 1915 has been chosen by Armenians as a special memorial day. This day is commemorated as a so-called genocide day in many countries with the influence of Armenian diaspora, and presidents of some states publish special messages for this day. Furthermore, April 24th has been highlighted in some states of Europe and America with the decisions taken by their parilaments related to the 1915 events. It is essential to look further to find out what happened on April 24, 1915 in order to maintain the connection between historical events and reality.

Shortly after World War I. started, the Armenian committees held meetings with the aim of determining a common attitude against the Ottoman Empire if they entered the war against Russia.[4] The United National Armenian Congress that consisted of the Hunchaks, Dashnaks and Ramgavar representatives concluded that the Armenians should be faithful to the Ottoman Empire and not be influenced by external influences.[5] However, in response to the declaration of mobilization on August 3rd 1914 after the Ottoman Empire entered World War I, some Armenian organizations preferred not to join Ottoman forces in contrary with that decision. [6] Moreover, on August 30th 1914 Armenians that lived in Zeytun refused to fight under the Ottoman flag and rebelled.[7]

In fact, there were two perspectives among these Armenian committees. The first was based on the thought that the Russians would defeat the Ottoman Empire in a possible Turkish-Russian war. For this reason, important locations were to be taken under control by forming voluntary units in the Caucasus as the Russians entered into Anatolia.[8]

The second assumption was built on the estimation that Russia could not advance so fast in Anatolia. Therefore, Armenian forces were to be deployed on the Caucasus border secretly, and  to take action when favorable circumstances occurred. The followers of this idea also wanted to provide voluntary support to the Russians.[9] The common purpose behind both of these perspectives was gaining autonomy or independence from Ottoman Empire through the post-war treaties by providing support to the Russians during the war. It can be observed from the very beginning of the war that the second perspective was generally accepted. Accordingly, those organizations spied against the Ottoman Empire on political and military areas and speeded up their armament.[10]

The Ottoman Empire made some warnings to appease the Armenians from the beginning of war.[11] The minister of internal affairs Talat Paşa contacted his Armenian representative Vartkes Efendi, and Enver Paşa contacted the Armenian patriarch. They delivered the message that the Ottoman Empire would take serious precautions against those kinds of actions.[12] Despite the warnings, the 3rd Army Commandership reported that armed Armenian organizations were helping Russians in their advance into the Caucasus. [13]

On February 27, 1915 Ottoman Supreme Military Command sent an order to military units that

“Guns, bombs and encrypted messages caught on Armenians are considered as evidence for preparations to uprising, therefore not to use the Armenian soldiers in the armed services and taking necessary measures”

The order further states that the Armenians who were loyal to the Ottoman Empire should be excluded from this treatment.[14] Despite these measures, Armenian gangs, taking advantage of the Ottoman engagement in the Gallipoli front, rebelled in Van on April 15th, 1915. Villages were raided and massacres were made against the Turkish. On the other hand, the Russians were marching toward Van. On April 20th, the Armenian rebels burned down the Ottoman Bank in Van, the Public Debt Administration building, the local post office and carried out attacks in the Muslim quarters of the city.[15] In face of the growing rebellion and the approaching Russian forces, the Governor of Van Cevdet Bey ordered the Turks to evacuate the city[16]. Thus, Van was occupied by the Armenians that were controlled by the Russian forces.

In order to contain the crisis the Ottoman administration issued a circular on April 24th. It ordered the closure of Armenian committees such as the Dashnaks and Hunchaks, seizing their documents as well as arresting the known ringleaders and those who were engaged in harmful activities and to gather those that were considered in danger were they lived to a more secure location.[17] Upon this order, some Armenians belonging to these committees were arrested. There are varying figures regarding the number of those arrested. According to the information received by the British Military Command in Egypt, 1800 Armenians were arrested. According to the French Foreign Ministry, the number of arrested Armenians was around 2500. Turkish sources mentioned that 235 people were arrested in Istanbul and were sent to Ankara and Çankırı.[18] In addition, 321 others were arrested in provinces outside Istanbul, making the total number of those arrested 556.[19] However, the sources mentioned above all agree that those arrested were not ordinary Armenians but those who joined the committee actions. The Ottoman documents indicate that a significant number of those arrested were subsequently released and some of them were deported while some of those that were guilty of gross misconduct were detained until the end of the war.[20]

The directives of 24 April are totally separate from the dispatch and resettlement order which was taken on May 27th, 1915. The Ottoman administration took the April 24th decision in order to prevent events that had occurred in Anatolia. Despite repeated warnings made prior to this decision, the espionage and the armed activities of the Armenian committees against the Ottoman Empire didn’t cease. The Ottoman Empire, struggling to survive in a World War, implemented the mentioned decision in order to protect its citizens from further attacks, and to prevent activities against itself. The decision only targeting the Armenian Committee members and not the civilian Armenian population of Istanbul demonstrates that the decision of April 24th cannot form the basis for an alleged genocide.