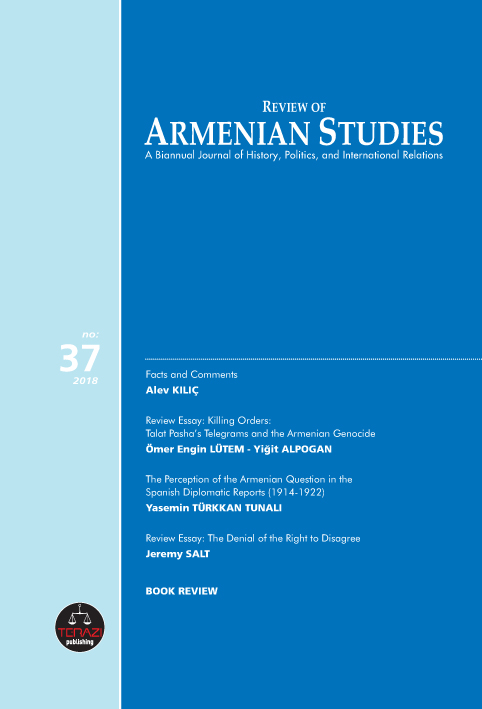 ​We start this time with the sad announcement of the loss of Ambassador Ömer Engin Lütem, the founder of Review of Armenian Studies and its editor until his passing. Ambassador Lütem had always distanced himself from the unconstructive emotional and partisan approaches to the long-standing issue of the Turkish-Armenian controversy. He launched the Review of Armenian Studies in 2001, aiming to stimulate inter-disciplinary debate between academics and practitioners on topics relating to Armenian studies and seeking to give a platform to scholars wishing to make an academic contribution to the disputed subjects such as the 1915 events. We will honor his legacy by carrying on Lütem’s work at the Review of Armenian Studies.

Picking of from where Ambassador Ömer Engin Lütem left of, in our first article for the 37th issue titled “Facts and Comments”, we cover Turkey-Armenia relations as well as the internal and international developments of Armenia between January and July of 2018. Key topics within this timeframe include Armenia’s annulment of the Zurich protocols, the message sent to the Turkish Armenians by President of Turkey Recep Tayyip Erdoğan, the election of Serzh Sargysan as the Prime Minister and the public demonstrations as a consequence of the latter’s election leading to his resignation, and the election of Nikol Pashinyan -the leader of the demonstrations.

In 2016, sociologist Taner Akçam had published a book titled Naim Efendi’nin Hatıratı ve Talat Paşa Telgrafları (The Memoirs of Naim Efendi and Talat Pasha Telegrams), in which he alleged that the documents published 98 years ago by Aram Andonian (attributed to several high-ranking Ottoman officials) are authentic. As such, Akçam also argued that Şinasi Orel and Süreyya Yuca, in their work titled The Talat Pasha Telegrams: Historical Fact or Armenian Fiction? published in 1983, were wrong in their judgement that the said documents are fake. In one of our journal’s previous issues, Ömer Engin Lütem had concretely demonstrated that Akçam assertions in defense of the “Andonian documents” are based on serious distortions, manipulations, and omissions. Akçam’s recently published book titled Killing Orders: Talat Pasha’s Telegrams and the Armenian Genocide is the revised English translation of his Turkish-language book. In it, he essentially resorts to the same distortions, manipulations, and omissions to demonstrate the authenticity of the “Andonian documents”. Yiğit Alpogan, in the study titled “Review Essay: Killing Orders: Talat Pasha’s Telegrams and the Armenian Genocide”, has taken the task of updating Ömer Engin Lütem’s previous work in order to once again concretely demonstrate the falsity of Taner Akçam’s assertions.

In her articled titled “The Perception of the Armenian Question in the Spanish Diplomatic Reports (1914-1922)”, Yasemin Türkkan Tunalı utilizes Spanish diplomatic correspondences belonging to the years 1914-1922 to demonstrate how Spain, a neutral state during the First World War, perceived the Armenian Question and the Turkish War of Liberation and how such perceptions changed in time. Dr. Türkkan Tunalı demonstrates that while Spanish diplomats were sympathetic towards Ottoman Armenians in the beginning of the First War and critical towards the Ottoman government due to its precautions against armed Armenian gangs, Spanish diplomats’ approach began to change towards the end of this war and the beginning of the Turkish War of Liberation. It appears that the excesses and destruction committed by the armed Armenian gangs and the invasion of Turkish lands by the Allied Powers played an instrumental role in changing the Spanish diplomats’ perception on the past and the-then present events in the territories of the Ottoman Empire.

Jeremy Salt, in the study titled “Review Essay: The Denial of the Right to Disagree”, thoroughly analyzes sociologist Fatma Müge Göcek’s 2005 book titled Denial of Violence. Ottoman Past, Turkish Present and Collective Violence Against the Armenians, 1789-2009. In her book, Göcek proclaims her aim to study violence (especially as it pertains to the Armenian Question) and the negative consequences the “denial” of this violence by the officials of the Ottoman Empire and the Republic of Turkey. However, Salt demonstrates that Göcek grossly trivializes the misdeeds of the Armenians during the First World War and overemphasizes the misdeeds of the Turks during the same period. Furthermore, Salt demonstrates that Göcek attempts to use the “denial” label as way to shut down debate on the disputed 1915 events and to silence scholars who have opinions that diverge from the Armenian genocide narrative. Salt concludes that Göcek bases her book on the premise of putting certain questions that undermine the genocide narrative out of the bounds of discussion, and that her book thus fails to remain faithful to history.

Tutku Dilaver reviews the book titled Ermeni Edebiyatının Mümtaz Şair Ve Yazarı Hovhannes Tumanyan’ın Hayatı Eserleri Ve Edebi Kişiliği (The Life, Works, And Literary Identity of Eminent Poet and Author of Armenian Literature, Hovhannes Tumanyan) by Yıldız Deveci Bozkuş. Hovhannes Tumanyan was a celebrated poet and author in Armenian literature. However, as explained in the book, Tumanyan was also an activist who espoused the ideal of brotherhood amongst peoples and who spoke out against Russia’s machinations aimed to damage the sense of brotherhood between Turks and Armenians during the Tsarist period. Tutku Dilaver points out that by reading the well-known stories authored by Tumanyan shared in the book, the reader comes to realize that similar stories have been passed from generation to generation amongst Turks, meaning that such stories are a common cultural heritage in the geography in which Turkey exists.