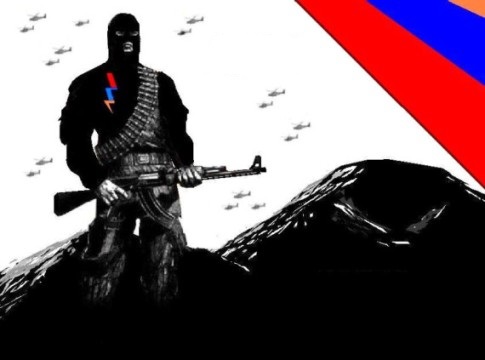 On 7 January 2020, the Armenian Weekly published on its website an article by one of its former editors Georgi-Ann Bargamian Oshagan titled “Reflections on the Weekly and the Armenian Armed Struggle Movement.”[1] As known, the Armenian Weekly is one of the press organs of the Armenian Revolutionary Federation (ARF – Dashnaksutyun), an Armenian nationalist organization that serves as the “flagbearer of militancy both in Armenia and the [Armenian] Diaspora.”[2] The said article was originally published in the December 2019 Special Anniversary Magazine dedicated in part to the 85th anniversary of the Armenian Weekly. When the contents of the article are examined by any sensible individual, it becomes clear that the article serves as a glorification of and justification for the wave of deplorable terrorism carried out by the “Justice Commandos of the Armenian Genocide” (JCAG – founded by the ARF) against Turkish diplomatic staff and their family members in the 1970s and 80s.

“[…] What I did not fully appreciate [about being an editor of the Armenian Weekly] was the import of that moment at a time when our eastern region [Armenian] communities [in the US] were grappling with news and reaction to the worldwide Armenian armed struggle movement that started in 1973 and ended around 1986, and whose actions were occurring increasingly in the United States.

Remembering the names today of those engaged in that struggle yesterday […] recalls what was at stake journalistically at the time: to convey the unfolding deep and delicate stories of sacrifice and violence in a manner that gave our readers full context for the actions, coupled with an understanding that our community’s identity and understanding of itself were also jolted by each assassination and bombing.

… We published articles reporting the establishment of letter-writing campaigns and legal defense funds to morally and financially support those arrested [militants]. We honored the dead [militants] as martyrs...

… the whole point for the armed actions was to amplify “the why” [of JCAG’s terrorist attacks] domestically and globally. The Weekly had the obligation and authority to fully articulate—in our press, in our voice—the reasons why [various Armenian militants] had taken such extreme risks: to elevate the demand for Armenian Genocide recognition and reparations by the Ottoman government successor Turkish government and place that demand firmly on national and international political and human rights platforms for overdue resolution.

Writing of the Armenian-American community’s reaction to the “terrorism” it was investigating, the CIA […] conclude[d] that “while most Armenians recognize that terrorism alone can never solve the Armenian questions and gain justice for the Armenian cause, many Armenians have become convinced that if it had not been for the use of violence, no one would be aware of the Armenian grievances.”

While our political efforts for justice in the pre-armed struggle era were maturing, the advent of that movement put our collective political self-reliance on steroids. In 1984, the Armenian National Committee of America (ANCA) Washington, D.C. office was established to better coordinate a national Hai Tahd [Armenian Cause] agenda that would have the capacity to leverage untapped political influence. …

How long would our diasporan fires have burned without the armed actions that transfixed and transformed our community in all its discomfort and hushed (and not-so-hushed) pride? That struggle challenged the Weekly and its readers to question who we needed to be in that moment so that we could better understand how to become who we deserved to be. And our efforts to pose and answer those and other questions to that end reverberated through the Weekly’s pages then, as they do now.”[3] [italics added for emphasis]

It is possible to derive several points from the above paragraphs:

2) In relation to the first point, something very disturbing began to happen to diasporan Armenians by the 1970s: they began to consider it morally permissible to kill people (especially Turks) simply for rejecting something diasporan Armenians wholeheartedly believed in -the genocide narrative concerning the 1915 Events. In this mindset, Armenians have the right to wish for someone to get killed if they do not agree with the genocide narrative, while Turks have no right to reject a narrative that they think unjustly portrays their ancestors as cold-blooded mass-murderers. These people see no issue in victimizing another group of people for their differing opinions, but -judging from their stance- would most assuredly proclaim grave injustice if the same victimization were to be done to them. Yet, the ARF (and its news organ the Armenian Weekly) and diaspora Armenians with this mindset seem incapable of realizing this double-standard-laden mindset.

3) The ARF and its followers portray JCAG and other militant Armenian organizations who engaged in terrorism as heroes and martyrs to be celebrated and emulated. When one analyzes the motives and actions of organizations such as JCAG, they are no different from today’s notorious DAESH (ISIS). While there is no international consensus on what terrorism means, a rough definition would be: “the systematic use of violence or the threat of violence as a weapon of intimidation or coercion by groups against a population or government into granting their demands.”[4] Leaving aside DEASH’s disturbing theatrical behavior, JCAG and DEASH are no different in their propensity to use violence in a cold-blooded manner on innocent people and civilian targets to achieve their aims. While DEASH is rightfully condemned for its monstrous behavior, why should JCAG be treated differently despite engaging in similar violence? From an objective standpoint, being Armenian and arguing your ancestors have been subjected to a grave historical injustice does not absolve you from the moral bankruptcy of engaging in or supporting terrorism. As such, the ARF and its followers (which unfortunately means a substantial section of the Armenian diaspora) have absolutely no right to claim the moral high ground in Turkish-Armenian relations.

4) Concerning Turkish-Armenian reconciliation on contentious issues over the 1915 Events, this article is a strong indication that the ARF is not interested in reconciliation. It is apparent from its media organs’ writings that the ARF is only interested in exacting primitive revenge on Turks and dumping all the fault of the deadlock in Turkish-Armenian relations on the Turkish side. There is no possibility of reaching a compromise with actors who have such a mindset because they are only interested in imposing their will upon you.

As a conclusion, it would be appropriate to point that it was for such reasons that we had in a previous article written the following regarding the ARF:

“The ARF is the most dominant organization within the Armenian Diaspora and is still an actor that must be taken into consideration in Armenia. Although the ARF has always marketed itself as the unflinching guardian of the Armenian people and Armenia, it has in fact acted as a nuisance for both Turks and Armenians ever since its establishment in 1890. Shortly after its establishment, the organization began to carry out acts of terrorism in the Ottoman Empire. The ARF played a key role in the deterioration of Turkish-Armenian relations due its use of excessive violence and its foolish adventurism in the name of an Armenian struggle for independence before, during, and after the First World War. Indeed, the first prime minister of the Democratic Republic of Armenia (First Republic of Armenia) Hovhannes Kajaznuni heavily criticized the ARF due to such faults (although, Kajaznuni also criticized in a sarcastic manner the Turkish side for what transpired during those times). However, the ARF failed to draw lessons from the grave mistakes it had thus far committed, and carried on with its extreme conduct. After the 1960s, the ARF began to subject the Diaspora youth to systemic brainwashing against Turks and established the Justice Commandoes terror organization that carried out attacks within the framework of the third wave of terrorism. As known, this organization left deep marks in Turkish society with the deplorable attacks it carried out against Turkish targets, and thus further strained Turkish-Armenian relations. Ever since those days, the ARF has continued to act as the flagbearer of militancy both in Armenia and the Diaspora. An article titled “Who Is an ARF Member-Dashnakstagan” that was published in February 2019 in Asbarez (an ARF news organ) demonstrates that the ARF continues with a totalitarian mindset to place selfish party interests ahead of the interests of the Armenian people. So long as this party continues to conduct itself with this mindset, it will continue to serve as a source of provocation in Turkish-Armenian relations.”[5]

[3] Bargamian Oshagan, “Reflections on the Weekly and the Armenian Armed Struggle Movement.”

[5] Tulun, “Armenia And The Veneration Of Terrorists – II.”