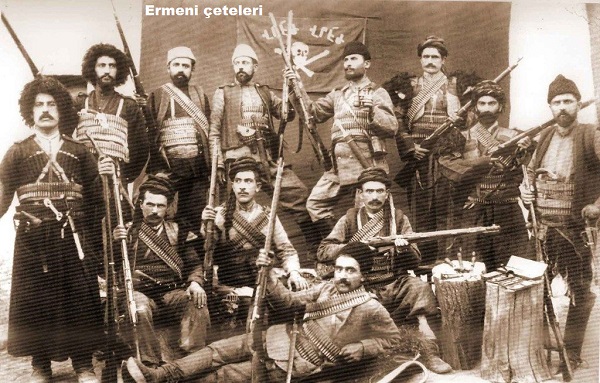 The Critical Corner, an online publication of the Armenian News Network/Groong featured a three-part article by Eddie Arnavoudian, an Armenian-American author, who gave a highly romanticized and problematic account of the Dashnaktsutyun’s armed wing, the so-called Fedayeen.[1] Derived from an Arabic word, in the Dashnak literature the term means one who sacrifices himself for the cause of the party and people. According to Arnavoudian, the Dashnak Fedais were “the armed Armenian freedom fighters” and “deserve to be remembered well” since they fought “frequently epic battle … to protect Armenian village communities.” Moreover, they conducted many operations targeting supposedly cruel Kurds, Turkish and Russian officials to avenge the victimization of the innocent Armenian peasants and readily sacrificed themselves for the well-being and “sacred cause” of their people.

Arnavoudian depicts these armed Dashnaks as Robin Hood-type selfless heroes that would “block roads, rob the rich and many a government postal caravan too and then generously distribute takings both to Armenian and Turkish villagers.” Arnavoudian places a special emphasis on Andranik Ozanian, so-called Andranik Pasha, as a legendary and gallant hero. Arnavoudian’s descriptions are entirely based on self-serving and utterly unreliable Dashnak memoirs and other Dashnak sources in which the Dashnaks attempted to project themselves as the ideal and unparalleled heroes.  And so-called General Andranik was dubbed as “a famous terrorist” even by the Russian sources. And there was no question that Andranik was a dark figure, involved in countless massacres of Muslim civilians in Eastern Anatolia since 1890s until the end of the Great War in 1918.  Later, he carried on his policy of combining mass murder and ethnic cleansing in Azerbaijan in order to carve out an Armenian state from the territories in which the Azerbaijani Turks constituted a clear majority.[2]

Arnavoudian further argues that while other political groups pinned their hopes on outside intervention from the European Powers, the Dashnak Fedais insisted on the need for self-reliance among the Armenian population and never coveted outside intervention. Moreover, Arnavoudian argues, while the Dashnaktsutiun’s political wing favored reconciliation and reaching an understanding with the Young Turks and, in order to do so, abandoned the program of arming the Armenian population, the armed wing consisting of Fedais heroically resisted any rapprochement with the Young Turks and insisted on the program of armament.

Unfortunately, the historical record does not support Arnavoudian’s ludicrous depictions of these self-serving armed terrorists and contradicts the apocryphal version of events narrated by him. Not only did these self-proclaimed heroes exploit the civilian Armenian population morally and materially, but they also targeted and killed countless Armenians who did not adopt their line. Between 1902 and 1905, for instance, “there were two Armenian victims assassinated” by these Armenian terrorists “for every one non-Armenian.”[3] In other words, this body of self-proclaimed defenders of the Armenian nation killed Armenians more than they killed others during certain periods of time.

Moreover, it is an indisputable fact that the Dashnak Fedai terrorists carried out a number of provocative and violent acts with the intention of bringing intervention of the European Powers, Arnavoudian’s desperate denials notwithstanding. Throughout the 1890s, the obvious Dashnak goal was to invite foreign intervention by engaging in countless acts of terrorism which, they hoped, would provoke conflicts between the Armenian minority and the Muslim majority in Anatolia. When the Dashnaks carried out their notorious raid on the Ottoman Bank in 1896, tellingly, they prepared a list of demands and presented them to European embassies in the Istanbul, for the obvious reason of getting the European Powers involved in the Armenian Question.[4] Similarly, Arnavoudian’s hero, Andranik Ozanian, himself admitted that the ARF fedais “created the lie that 7000 people were massacred [in Sasun] by using a list of fake names in order to submit these to the [European] Embassies”[5] with the obvious goal of provoking European intervention. But even had these well-known episodes not been documented, the official Dashnak publications never bothered to hide their motives. As Mikael Varandian, a long time Dashnak member and the party’s official historian noted:

“The purpose of the Armenian movement has been, from the beginning, to organize as far as possible a long drawn-out fight against the Ottoman tyranny, to create in the country a continuous revolutionary state, always having before our eyes the intervention of the third factor …. the European factor.”[6] [italics added for emphasis by AVİM]

Thus, contrary to Arnavoudian’s romanticized and ahistorical depiction of events, the Dashnak Fedais apparently carried out their violent and provocative acts with the obvious goal of bringing European intervention rather than relying on the Armenian people.

Likewise, Arnavoudian’s allegations over the difference between the political and armed wings of the Dashnaktsutiun concerning the Young Turks and the arming of the Armenian population are misleading. It’s true that Andranik Ozanian himself did not favor reaching an understanding with the Young Turks but other “fedais” such as Reben Ter-Minasian or Aram Manukian were quite satisfied with it and did not complain about living in Eastern Anatolia under the Young Turk administration. Similarly, Arnavoudian’s claim that the program of arming the Armenian population was abandoned after the 1908 is grossly inaccurate, as all the contemporary sources including the Dashnaks’ own correspondence reveals. Immediately after 1908, the local Dashnak committees in Eastern Anatolia asked the Dashnak Central Committees in Istanbul “for guns as they sure that it would increase the party’s prestige.”  Moreover, a special Dashnak Committee “was buying armaments and transporting them to the interior.” Simon Zavarian, a founding member of the Dashnaktsutyun, even instructed Mikael Varandian to inform the Dashnak agents responsible for purchasing arms where they could find cheaper arms.[7] The Consular Reports from Erzurum, Bitlis, Van etc. had all reported and complained about the Dashnaks’ extensive arming of the Armenian population.[8]

As for Arnavoudian’s claims that these Dashnak Fedais were readily sacrificing themselves to protect the Armenian population and to improve their life standards, the argument becomes laughable considering that almost every non-Dashnak source agree that their actions and presence actually deteriorated the conditions of the Ottoman Armenians. In Bitlis, for example, the Armenians had complained to the Russian Vice-Consul that “the Armenians had received nothing but suffering and woe” from these Dashnak fedais. They extorted money from the Armenian population, routinely resorting to violent beatings and threatening individuals with their lives to obtain their money.[9] Similarly the British Consul in Van observed that:

From what I have seen in the parts of the country I have visited I have become more convinced than ever of the baneful influence of the Taschnak Committee on the welfare of the Armenians and generally of this part of Turkey. It is impossible to overlook the fact in that in all places where there are no Armenian political organisations or where such organisations are imperfectly developed, the Armenians live in comparative harmony with the Turks and Kurds[10]

Not only did these Dashnak fedais made life worse for the Armenian population, but they were also making financial profits by imposing mandatory sales on the peasants. The British Consul at Van noted that the Dashnaks deliberately kept the Armenian population in alarm to push forward their goals and sell weapons to villagers: “They buy rifles at say £10 and force the villagers to buy from them at £20.”[11] The Consul described “the Taschnakist trade of smuggling [arms] from Russia and obliging the villagers to buy them” as “a lucrative business.” Commenting on the Dashnak tactics in this regards, the Consul further observed that:

“An [Dashnak] agent arrived in a certain village and informed a villager that he must buy a Mauser pistol. The villager replied that he had no money, whereupon the agent retorted, ‘You must sell your oxen.’ The wretched villager then proceeded to explain that the sowing season would soon arrive and asked how a Mauser pistol would enable him to plough his fields. For reply the agent proceeded to destroy the poor man’s oxen with his pistol and then departed.”[12]

Obliging villagers to buy weapons at lucratively higher prices to make financial profits, killing the peasants’ livestock, or beating them when they refused to oblige with the Dashnak demands can hardly be described as self-sacrificing actions meant to protect villagers.

Likewise, the Russian Vice-Consul in Van described how the Dashnaks plundered the Armenian Church of Akhtamar, taking possession of all the valuables found in the church as well as its establishing control over its considerable incomes.[13] Rather than serving the people or providing for them, the Dashnaks seem to have only used and abused them in the service of their own selfish goals.

In view of the discussion and materials used above, it becomes quite clear that Arnavoudian’s idealization and worship of the Armenian Fedais is based on wishful thinking and lopsided ethnocentric views that ignore a variety of non-partisan sources which present a more balanced and critical appraisal of the Dashnaks’ armed wing. While inside the closed circle of the Armenian Diaspora, Arnavoudian’s articles might be welcomed and even actively encouraged, they cannot convince an informed and impartial reader.

As noted by an Armenian critique of the Dashnaktsutiun, the Dashnaks “as an organization has degenerated so far, that it can be compared with the Italian Mafia, and the gangsters of this country [the US] ... Its hands are raised against everybody, its plottings and crimes have rocked the conscience of all decent Armenians, and have disgraced our people before the civilized world.”[14]

* Photo: A gang of fedais

[6] K. S. Papazian, Patriotism Perverted: A discussion of the deeds and the misdeeds of the Armenian Revolutionary Federation, the so-called Dashnagtzoutune, (Boston: Baikar Press, 1934), p. 21.