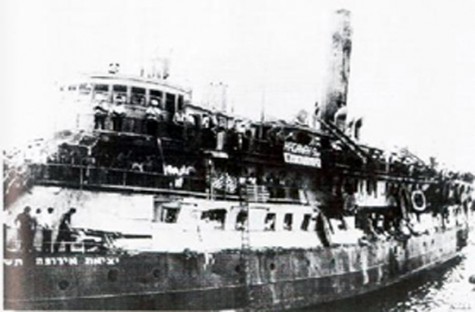 The Struma, a Bulgarian ship sank with its passengers and crew off the coast of Şile on February 24, 1942. On February 24, 2015, a state ceremony was held in Sarayburnu to honor the victims of the Struma tragedy. Turkish-Jewish Community Deputy Leader Moris Levi also took part in the commemoration honoring the people killed in the ship.

The Turkish Foreign Ministry, in a written statement expressed that, 73 years ago, on February 24, 1942, 768[1] passengers, including 108 children, living in Romania departed from the Port of Costanza to Palestine on board of the Struma, a Bulgarian ship registered under the Panamian flag, in order to escape the anti-Semitic laws and propagandas in Europe due to Nazi pressure. Mentioning that the Struma sank after it was torpedoed by a Soviet submarine off the coast of İstanbul, the statement pointed out the 70th anniversary of the Holocaust, commemorated all those who lost their lives on Struma and extended condolences to the Turkish-Jewish Community. [2] Moreover, it was emphasized that the Turkey adopted a humane approach to tragedies that occur in its neighborhood and it was pointed out that  the memory of this sad event will be passed onto coming generations.

In the state ceremony held in Sarayburnu, Minister of Culture and Tourism Ömer Çelik stated that the Turkish-Jewish Community was also a part of Turkey and said that the Struma disaster was a shared pain.[3] He emphasized that this ceremony was held to prevent anti-Semitism, Islamophobia, racism and xenophobia in the future, within the context of commemorating the sinking of Struma.[4]

In his speech, Deputy Leader Moris Levi pointed out the importance of commemorations for the community ones who lost their live on Struma and emphasized that inhumane practices as seen in the tragedy 73 year ago, both anti-Semitic and Islamophobic hate speech and its pain caused despair. Levi said that he understands the troubles and feelings of the people who are exposed to Islamophobia and marginalization and stated that this problem could be solved only by improving the education and justice systems. Thus, he wished to leave a better future for the next generations and on behalf of the Turkish-Jewish community, he thanked all who shared their sorrow.

Anatolia and this land witnessed many humanitarian tragedies and many people lost their lives. Every community who lost lives had to bear this common pain together. Every tragedy in these lands are shared and embraced by all communities. We commemorate the victims of Struma and other corresponding tragedies.