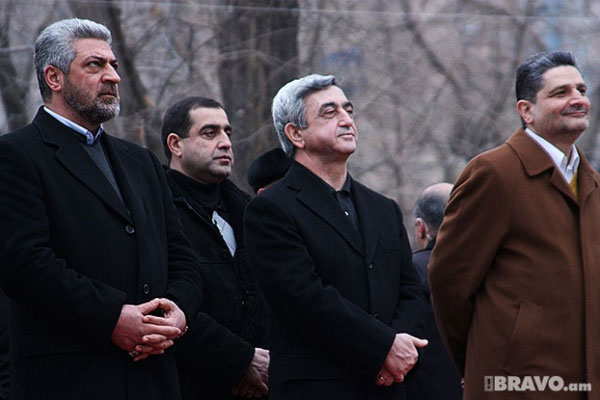 A very interesting article written by philosopher Henry Theriault titled “Before We Talk about Armenian Genocide Reparations, There Is Another Accounting Due” was published by the Tashnak Armenian Weekly last week. Theriault was one of the contributors to the Tashnak reparations committee and he is known for his active engagement and writings in support of Armenian reparation claims. In that aspect, this long critical article can be seen as having highly representative value for debates ongoing within the Armenian diaspora and homeland.

Its oligarchs are pale imitations of Putin and his cronies, its leaders are the same authoritarians that are such old hats around the post-colonial world, its economy features the same kind of debilitating corrupt parasitism that has marked many societies across the globe since the mid-20th century and before, and on and on.

According to Theriault, even one denies the whole passive objectification of Armenian identity as a result of Sovietization, it is still clear that a whole range of Armenian organizations “around the world reveals the same kind of imitative mimicry.” Theriault questions the motives behind how Armenian NGOs, universities, artists etc. “invest their resources in order to see their names on letterhead and be invited to meaningless meetings with celebrities and government officials, so they can adorn their walls with photographs announcing their own importance and relevance.” According to Theriault, Armenian studies academic research have produced [nothing] of significance other than the “most blandly traditional ways.”

Additionally Theriault rigorously argues that today being Armenian is now dominated by “personalities and wealth, not commitment and insight… internal infighting and inter-organizational conflict.” According to Theriault, there are some Armenians who successfully “shattered old boundaries”… find “new directions unexplored before in the Armenian community and beyond it”… reflect upon “a complex, ever-emerging, never fixed, multivalent Armenian identity”, produce “a new conceptualization of the Armenian-Turkish relationship, mediated through both an engagement of history and a material object that cannot simply be ignored or put aside, and in its persistence is embraced as itself an instrument (in both senses) of reworked sensibilities and relationship”… and finally come up with “something richer, flowing between worlds in a manner that recognizes and forges connections along lines of human rights concern.” But these seem to remain a minority in Armenian community.  Theriault declares that in the end Armenians became “a small, weakened, marginalized group politically, geographically, and in terms of identity.”

Very interestingly Theriault argues that at the heart of the failure of Armenians to “just to preserve some semblance of Armenian identity” lies their “poverty”, which is mainly caused by Armenian political elites’ “great drain of resources.” He claims that one central problem to be faced today is the “rampant corruption through which an obscene elite class of the super-rich has gorged itself on the lifeblood of the masses and pushed a large percentage of the population into often abject poverty.” Thus today, in his view, Armenians replicate some very basic negative features that are inherent to a post-colonial country, i.e. “corruption, post-colonial/post-Soviet authoritarianism, cronyism/nepotism, ineffectual electorialism.” Theriault blames Armenian governments/regime since 1991 for building a legacy of:

a thriving industry in the trafficking of women and girls into sexual slavery; an all too frequent disregard for and active repression of human rights, from violence against peaceful political protesters to tacit consent to widespread domestic violence and active support for brutal oppression of the LGBT community; and a bureaucratic rigidity and narrow-sightedness that has prevented the government from such basic things as developing an active international political campaign to explain the Karabagh “conflict”

Theriault also points out that whatever propaganda and other political attempts helped achieve Armenians can be undermined by these authoritarian tendencies. According to Theriault “Armenia’s political elites and oligarchs and their minions… enriched themselves by skimming foreign aid… extend their power and take advantage over the bulk of the population.” Therefore, in Theriault’s understanding, it would not be wrong to assume that the oligarchs and political elites are a real threat to the preservation of Armenian identity, i.e. to overcome their poverty. If the Armenians are to be saved, they have to be provided “a basic opportunity for a decent life to the Armenian multitudes who have lost out due to political repression, expropriation of wealth, and exploitation.” Claims to return property and territory are rendered meaningless since oligarchs and the Armenian political elite will be the main obstacle to support the survival of Armenians as a people and Armenia as a political entity. For Theriault, it is not only oligarchs and the elite, but also business leaders and other power holders who are responsible, since,

without the slightest prick of conscience they have used Armenia as a vast wealth reserve open to pilfering, their actions are morally deplorable. Indeed, every one of their thefts is a treason.

That is why, according to Theriault, reparations or return of territory is not a cause worth pursuing. He argues that without meaningful change in Armenia towards a democratic, open, ethical government and political structure, the whole case for reparations will only help “to further enrich the corrupt leeches dominating Armenia today… [and] to extend their power and advantage over the bulk of the population.” Theriault calls this process as “irresponsible reparations” and argues that this kind of political cause is nothing more than asking for “blood money.” On the ‘return of territories’ issue, Theriault is more critical as he argues that Armenians would not be be allowed full access to the lands “for business and residential purposes, with tax benefits going to the republic”.

Theriault argues that the system that is imposed today on even the newer generations in Armenia which “retained authoritarian, violent/repressive, and other elements of the Soviet system coupled with a new unfettered, amoral capitalism” is how neo-colonial domination of Armenia by Russia is maintained. So in Theriault’s view “post-Soviet cleptocratic/plutocratic/authoritarian state and civil society form” must be held accountable and transformed, as well as the state and civil society. Theriault argues for the development of a new national identity and a new economic and political form that is different that liberalism/capitalism, socialism, or any of their variations of distinct challengers, even if some of those new possibilities “will be discarded for bad consequences or their inadequacy for the problems faced.” Thus according to Theriault, there is no “comfortable previous state nostalgically to return to”, although he does not specify a concrete model to build this new system upon.

In total, these are interesting remarks coming from a pro-Armenian activist with a lot of truth in them. Thus, Theriault’s article points out the confusion both the Diasporan and homeland Armenians are facing today, mainly their understanding that all their attempts were in vain and now they are challenged by building a sustainable future for the Armenians. As Zygmunt Bauman says their “insecurity does not derive from a dearth of protection, but from the ‘lack of clarity of its scope’ in a social universe that ‘has been organized around an unending pursuit of protection and a frantic search for security.’”