REGIONAL COMPREHENSIVE ECONOMIC AGREEMENT: A SIGNIFICANT TRADE AGREEMENT THAT WILL SHAPE THE REGION AND THE WORLD
Commentary No : 2020 / 46
AVİM
02.12.2020
5 min read 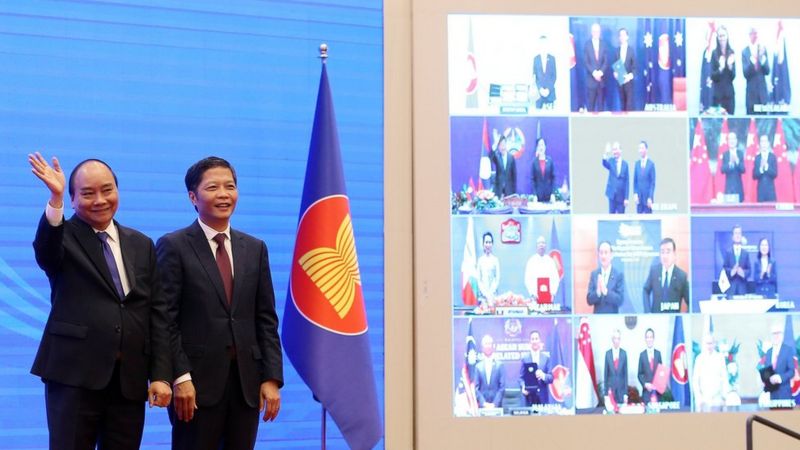 In recent years, there has been a debate about China and whether it is widening its influence in its region and in the wider world. The debate centers on whether global trade and its leadership are shifting towards the East from the West. The idea of the decline of the western trade leadership is not a new phenomenon, having come to mind since the 2008 financial crisis. However, the financial crisis of 2008 was just an oscillation in the international political economy’s axis. Despite the speedy economic recovery in the Asia region after the crisis, it was not yet possible to talk about a definitive shift in the flow of global trade. However, the signing of the Regional Comprehensive Economic Partnership (RCEP) has intensified the debate about the global trade and the future of the international political economy.

RCEP, signed on 15 November 2020, is one of the largest trade deals in the world. Negotiations about this trade deal started in 2012 and it was signed primarily by the Association of Southeast Asian Nations (ASEAN) countries in 2020. This trade deal includes the ten ASEAN member countries; which are Brunei, Cambodia, Indonesia, Laos, Malaysia, Myanmar, Philippines, Singapore, Thailand, and Vietnam; and also includes China, Japan, South Korea, Australia, and New Zealand. The signatories of this pan-Asian trade deal constitute about a third of world’s population and economic output[1] and this provides a crucial significance to the RCEP. Another crucial point is that RCEP is the first regional multilateral trade pact signed by China.

The RCEP is predicted to bring several economic benefits to its signatory countries. The first one is quick economic recovery because of the increased regional trade. In addition, RCEP is expected to provide a boost of foreign investment for the ASEAN countries with lower wage and unskilled labor[2]. RCEP provides tariff reductions or elimination, standardized customs procedures, and services, which will lead to easy flow of exports of the member countries which signed RCEP. It is thus forecasted that this trade deal will contribute to the global economy by adding an extra 186 billion dollars’ worth of economic activity and by contributing 0.2 percent to the GDP’s of member countries[3]. A reduction in manufacturing costs and an improvement in conditions for companies by providing exports of the signatory countries within the bloc is going to be one of the future outcomes of the deal as well. RCEP also contains provisions on intellectual property rights, which is a highly relevant topic given today’s fast-paced technological progress and that RCEP signatories are, overall, manufacturing hubs for various high-tech goods. Considering all these, RCEP means a great contribution to global commerce.

On the other hand, RCEP contains controversial parts as well. First, there is the suspicion that RCEP is going to benefit China, Japan, and South Korea more than the other signatory countries[4] despite the explanations of the ASEAN Briefing claiming the opposite. There are concerns that exports of countries such as Thailand will suffer from this huge trade deal because of cheap Chinese exports.  Another matter of dispute is India’s withdrawal from the RCEP due to its concern of lower tariffs hurting its economy[5]. Indeed, the absence of India is considered to be a great loss, since its participation could have led to a greater increase in commerce due to the fact that it is a huge economy with relatively few trade agreements. Yet, India pulled out of the deal claiming that there were not enough assurances given to it for the protection of its exports against cheaper Chinese exports. Other than those, there are several criticisms such as the absence of regulations on the agriculture sector and e-commerce in the pact. Information technology is one of the sectors that is absent in the RCEP deal as well.

According to analysts, this pan-Asian trade deal has a potential to decrease US influence in the region after US President Donald Trump’s withdrawal from the Trans-Pacific Partnership[6]. Whether this isolationist approach will gain ground or not or maybe another trade war will greet the world, RCEP means a considerable cornerstone for the global economy. The significance of this trade deal must not be underestimated, as the possible outcomes of this pan-Asian trade deal will probably influence the whole Asia-Pacific region and the world as well.

This development is also important for Turkey. It is a call for Turkey to adapt its economy to new conditions. A new trade strategy will also be needed for Turkey to align its policies with the possible outcomes of the trade deal. Since the signing of this trade deal means the birth of a new trade bloc and as Turkey has considerable bilateral trade with China, South Korea, and Japan[7], Turkey must initiate action and appropriate new policies to maintain and increase trade with those countries. Turkey does not have sufficient connections with many of the signatory countries, which makes it necessary to introduce new trade and investment policies. In this vein, Turkish industrialists need to be given incentives to invest to the Asian countries to increase the export levels to this lucrative regional market. Another aspect of interest for Turkey is the area that lies adjacent to RCEP, which is the Central Asian Republics (CARs). With its deep-rooted ties with CARs, Turkey is faced with an interesting challenge of developing policies of mutual interests with both CARs and RCEP.