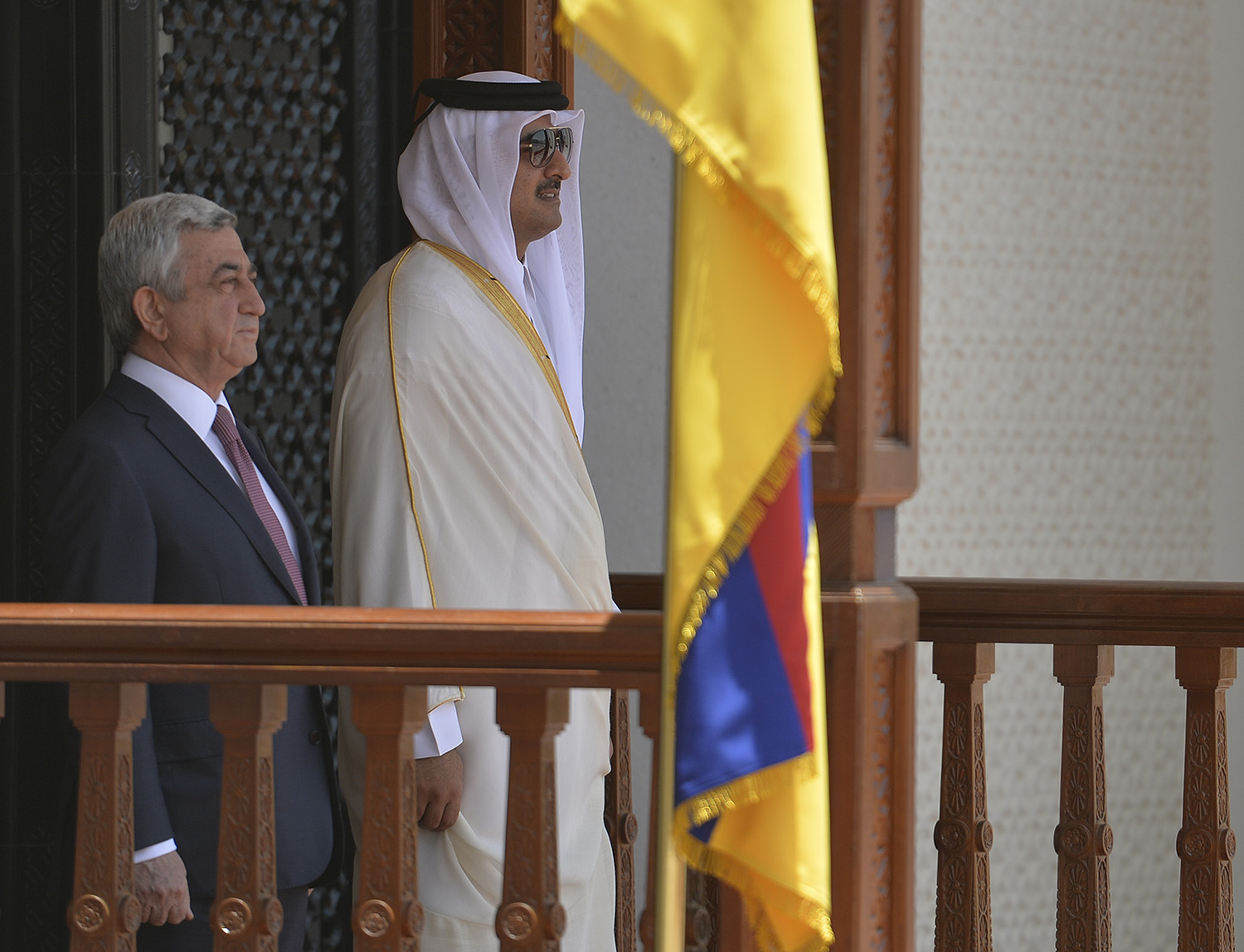 In mid-May 2017, making his first official visit to Doha, Qatar, Armenian President Serzh Sargsyan met with the Emir of Qatar, Sheikh Tamim bin Hamad Al Thani. During their meeting, both leaders discussed further developing bilateral ties and boosting the mutually beneficial trade and economic relations, along with opportunity of the visa liberalization and possibilities of cooperation in a multilateral format. It was also reported that upon Armenia’s proposal, the sides also discussed a number of investment projects in different areas, including “the use of Armenia’s transit opportunities, especially access via Armenia to the countries of the Eurasian Economic Union.”[1]

Within the framework of his visit, President Sargsyan also met with the Chief Executive Officer of Qatar Airways and discussed cooperation in the area of aviation and prospects for development. Reportedly, President Sargsyan underlined the importance of direct flights from the countries of the Persian Gulf, including Qatar, for Armenia’s tourism sector, and that Armenia would encourage and support Qatari investment in different areas such as aviation. It should be noted that “Qatar Airways entered the Armenian aviation market in May 2016 and is carrying out Doha-Yerevan-Doha regular flights”.[2]

Furthermore, a couple of weeks after Sargsyan’s visit to Qatar, on 1 June 2017, it was announced that Armenia lifted visa requirements for citizens of Qatar.[3]

In addition to Qatar, it should be noted that President Sargsyan also made an official visit to the United Arab Emirates in March 2017 to attend the Armenia-UAE investment forum, which was agreed to conduct at during the President’s official visit to the UAE in November 2016. During his visit, he also met with Vice President, Prime Minister, Minister of Defense and Emir of Dubai Mohammed bin Rashid Al Maktoum, during which, according to press reports, the two sides discussed ways of enhancing investment partnership between the UAE and Armenia with a focus on tourism, water and agriculture, and agreed on reciprocal exemption from visa requirements.[4]

It is also noteworthy that in a time of Armenian activity towards Gulf States, the spiritual leader of the Armenian Catholicosate of Cilicia Aram I made a visit to Kuwait in May 2017 to “anoint the newly constructed St Vartanantz Church and inaugurate the new prelacy [in Kuwait]”[5], during which he also met with Sheikh Sabah IV Ahmad Al-Jaber Al-Sabah, the Emir of Kuwait.

The recent activity in Armenia’s relations with the Gulf States can be seen within the context of developing economic ties and attracting investments from the Gulf. Furthermore, Armenia’s interest in the Gulf countries can be considered as part of its desire to become a conduit for trade from the South to the North and vice versa. Indeed, at the Armenia-Iran Business Forum, which was held on 21 December 2016 on the occasion of Iranian President Rouhani’s visit to Armenia, President Sargysan stated that “as a neighbour and friendly country for Iran, Armenia may also become a gateway and additional transport corridor towards the EU and CIS member states. With this regard, I stress the importance of the North-South highway as the shortest transit route linking the ports of the Black Sea to the seaports of the Persian Gulf.”[6]

However, the recent crisis involving Qatar has the potential to disrupt the dynamics in the Gulf, and therefore, impact Armenia’s interests in the Gulf. Initial reactions from Armenia suggest what Armenia’s position will be regarding the crisis. According to a press report, an unnamed senior government official said that Armenia will continue to seek closer links with Qatar despite serious sanctions that have been imposed on it by Saudi Arabia and other Arab countries. Armenian Deputy Foreign Minister Shavarsh Kocharian’s is reported to state that the Qatar crisis “is connected with the situation in the Middle East. It is connected with anti-Iranian sentiment in Saudi Arabia. It is connected with the fact that Sunni Muslim Qatar is not joining the anti-Iranian coalition and is more inclined towards cooperation [with Iran]”.[7]

As implied by President Sargsyan’s above-mentioned statement, Armenia enjoys good relations with Iran. In fact, Armenia is dependent on Iran as it is one of the two gateways for Armenia to the outside world. Iran plays an indispensable role in Armenia’s aim of becoming a conduit between the North and South. Therefore, Armenia will want to avoid any action that would offend Iran. In this context, it is apparent that Armenia follows Iranian guidelines for developing relations with the Gulf States, and that Armenia will consider Iranian sensitives in its relations with the Gulf States in the coming period. Furthermore, another factor that could affect Armenia’s stance is the fact that there are no diplomatic relations between Armenia and Saudi Arabia, the leader of the bloc opposing Iran, due to Armenia’s illegal occupation of Azerbaijani territories.

*Photo: Presidency of the Republic of Armenia

[2] “President Serzh Sargsyan Met With The Chief Executive Officer Of Qatar Airways”, Presidency of the Republic of Armenia, May 15, 2017, accessed June 12, 2017, http://www.president.am/en/press-release/item/2017/05/15/President-Serzh-Sargsyan-met-with-Executive-Director-of-Qatar-Airways/.