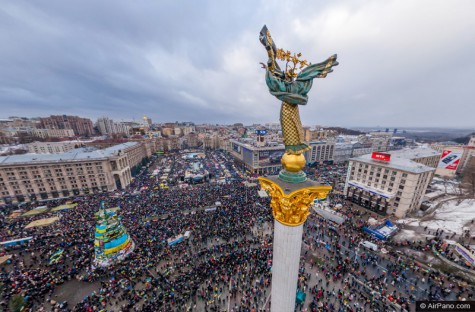 A BRIEF EVALUATION AFTER MINSK SUMMIT

EuroMaidan is the name given to general demonstrations in Ukraine that started in 21 November 2013, with an aim to demand having closer ties with European Union and focusing on European integration. Protests were a reaction to the corruption and the violation of human rights taking place in Ukraine and protesters called for President Viktor Yanukovych and his government to resign. According to the surveys made by “Research and Branding Group”[1] in December 2013, the ongoing conflict in Ukraine stems from different tendencies of western and the eastern regions of the counrty over their preferences. While the western part of Ukraine wish to integrate their markets into European M-markets, the eastern part of  Ukraine wish to merge itself and its markets with Eurasian Customs Union (ECU). Whereas %81 of the population isin favor of European Union (EU) in the West, %61 of the population support Customs Union in the East. So even though, in general, the Ukrainian population choose the EU with %46, preferences differ from region to region. This causes differentiations among future prospects of the population in Ukraine, therefore, effects domestic politics directly and international policies indirectly, since the east of the country claims independence from Ukraine. Like many other economic and social dynamics, such as trade relations and deeper political integration, energy sector - which is an important issue both in domestic and international politics - is affected by current developments.

Over the last months, the conflict in Ukraine escalated into a crisis  and both Western Allies – EU, NATO and United States (US)- and Russia did not take any steps back. Even though NATO warned Russia several times,[2] and the US and the EU have imposed sanctions together with their pro-Western ally Japan,[3] Vladimir Putin has made it seem  like Russia is ready to sit on the table and reach to a common solution only if the West is also ready to compromise and take Russia’s interests into consideration.[4] Russia, with her new foreign policy trends and strategies, underlines her discomfort caused by the unipolar global system. Therefore, Russia uses energy resources as a tool of diplomacy, and as we have experienced in the Ukrainian case, it tries to take a more active role in the international community. Also considering the recent initiatives such as Eurasian Customs Union, which aims to integrate economic systems of the ex-Soviet Union countries -although being part of the Soviet Union in the past is the only common ground for most of them- Russia offers alternatives to the EU. It is still possible to cooperate with the EU in the political area but since the regulations of the both unions are not compatible, in terms of the customs application and further integrating regulations into their national systems, if a country chooses one over another, she automatically joins a bloc. Currently, the ECU has three members and Armenia also decided to start the process in September 2013, which will end up as being a full member by September/October 2014.[5]

Even though the future of the ECU remains  unknown, its rapid process concerns the West. The EU, being highly depended on Russia in terms of energy, has no other options in the short-term, and thus continues talks with Russia over Ukraine. On the 26th of August, Russia's President Vladimir Putin, EU foreign policy chief Catherine Ashton, President of Belarus Alexander Lukashenko and President of Ukraine Petro Poroshenko sat on the table and tried to figure out if they can reach to a common solution or not. Lukashenko, president of Belarus, stated that "The parties have different ideas for the solution, but the both sides believe in dialogue to resolve the crisis,"[6] yet concrete actions seems not to be possible at the moment, thoughthere are promising developments. For instance, Russia has raised her concerns on Ukraine-EU Association Agreement, the Assistant to the President of Russia said that "the Ukrainian side may agree to introduction of amendments to the text of the supplement at least", which will be offered on 12th of September.[7] This attitude shows that Russia will raise her concerns in order to find a common solution in the numerous ways as possible. Secondly, "We have agreed that consultations between the border forces will begin immediately with the aim to ensure the implementation of this condition [the establishment of control over the border of Ukraine and Russia]," said Proshenko yesterday, and this established control mechanism will be monitored by OSCE officials.[8] Russia and Ukraine agreeing on a common ground on the security border issue, creation of a three-sided contact group and including OSCE in the process actively can be taken as a good sign. On the other hand, Russia’s recent actions such as Russia sending two aid convoys despite all the reactions remains as a problem.

Influence of Russia in the former-Soviet area and negative perceptions of the Eastern European countries will not be overcomed in the short-term.[9] Poland already asked for 10,000 troops on its territory from NATO in April.[10] Estonia, Lithuania and Latvia also requested NATO to strengthen its existence in the Eastern Europe[11]. However, these countries are for the most part completely dependant on Russian gas. Despite the fact that they are concerned over Russia’s interference in Ukraine and ask for more help from the West, energy might be a huge issue in the upcoming months. Catherine Ashton, who is very well aware of possible crisis said: “We’re in the summer now. But the winter is coming and there are places [in east Ukraine] that don’t have any power, don’t have the capacity to provide heating”. This statement has been followed by the EU energy commissioner Gunther Oettinger who supported the idea of an "interim" deal on Russian gas to avoid future energy problems that might occur in the Eastern part of Ukraine and the Eastern European Countries relying on pipelines carrying Russian gas via Ukraine.[12] Coming from this concern, Oettinger and Russian Energy Minister Alexander Novak decided to meet on 29th of August to discuss South Stream[13] and possible consultations on Russian gas among Ukraine, the European Commission and Russia - which had previously failed.[14] But this time, outcomes might be different due to the time constrains and the outcomes of the Minsk Summit.

Additionally, there are more pro-Russian regions in the Eastern Europe such as Transnistria and Gagauzia, within the borders of Moldova, a country with good relations with EU and member of Eastern Partnership Initiative that might be triggered with the growing crisis in Ukraine. All  parties should agree on common grounds in order to avoid any other Ukraine-like examples.

Minsk Summit is an unsuccessful initiative in terms of taking concrete actions and finding an immediate solution to the crisis in Ukraine. But in terms of bringing concerned parties together and trying to reach to an inclusive solution, starting a dialogue, establishing a promising process that enables Ukraine, Russia and the EU to discuss and raise their concerns openly; it is a promising step. This step might contribute to the efforts to change perceptions of the Eastern European countries towards Russia, as well as Russia’s attitude towards these countries and regions. Considering economic ties among these actors, Russia’s new ECU initiative, opening Russian gas market to new partners such as China, the EU’s dependency on Russian energy resources, outcomes of the sanctions imposed against Russia,[15] all of the actors will gain a lot from a much more balanced and transparent platform.

[1] A research and consultancy company based in Ukraine, http://rb.com.ua/eng/

[2] Latest warning came from Rasmussen over entry of Russian convoy into Ukraine on 22nd of August, during the press conference at NATO HQ, http://www.nato.int/cps/en/natolive/news_112089.htm

[13] South Stream created a lot of discussions between EU and Russia as well as EU members who are signatories of the agreement. EU within the scope of the legal regulations and sanctions imposed against Russia told EU members to not to allow South Stream pipeline Project to proceed.

[15] Some countries such as Greece, Bulgaria and Poland might suffer from these sanctions particularly in the agricultural area.