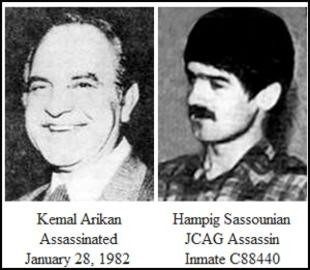 On 14 December 2016, the court in California decided for the release on prohibition of Harry (Hampig) M. Sassounian, one of the assassins who murdered Turkey’s Consul General to Los Angeles Kemal Arıkan in 1982. This decision, which is open for appeal, will be enforced if the governor of California approves the court decision.

The decision for Harry (Hampig) M. Sassounian’s release on prohibition is by no means an ordinary event and requires to be addressed.

The orchestrators of the 1975-1985 terror campaign were the Armenian Secret Army for the Liberation of Armenia (ASALA) and the Justice Commandos for the Armenian Genocide-Armenian Revolutionary Army (JCAG-ARA).

Whereas ASALA, which is better known in Turkey, was a left-wing pro-Soviet organization, JCAG-ARA was right-wing. In fact, while ASALA framed its terror campaign against Turkey within a more general rhetoric of anti-imperialism, JCAG-ARA did not adopt an open ideological stance and depicted its reason of existence solely as the assassination of Turkish targets.  As a matter of fact, while ASALA launched attacks also on non-Turkish targets, JCAG-ARA targeted only Turks. Ultimately, JCAG-ARA murdered twice as many Turks as ASALA did.

Harry (Hampig) M. Sassounian, the murderer of Turkey’s Consul General to Los Angeles Kemal Arıkan, who was released on prohibition on 14 December, was an assassin within the ranks of JCAG-ARA.

It is almost anonymously believed that JCAG-ARA was the armed branch of the Armenian Revolutionary Federation-Dashnaksutyun (ARF-Dashnaksutyun). As it is known, ARF-Dashnaksutyun was founded in 1890 with the goal of “liberation” of the Ottoman Empire’s Eastern provinces. From its foundation until the 1920s, it played a major role in the bloody events that took place in this region. It was also the main player in the violent events in the South Caucasus between Azerbaijanis and Armenians in 1905 and 1918. Between 1918 and 1920, ARF-Dashnaksutyun ruled the short-lived Armenian Republic during which carried out an ethnic cleansing against the Muslim population in Zangezur region in the south of the present-day Armenia.  Between 1920 and 1922, it was again ARF-Dashnaksutyun that carried out an assassination campaign that victimized a total of ten Turks, Armenians and Azerbaijanis, among which were some top-ranking former Ottoman officials. It is widely believed that the 1975-1985 terror campaign took its inspiration from this assassination campaign between 1920 and 1922.  During World War II, some ARF-Dashnaksutyun chiefs took side with the Nazis and formed an Armenian legion within the Nazi army. Following the collapse of the Soviet Union in 1991, the newly independent Republic of Armenia banned ARF-Dashnaksutyun for its illegal activities. This ban was lifted in 1998. In 1999, ARF-Dashnaksutyun-linked terrorists raided the Armenian parliament and killed nine people including the prime minister.

It should be clearly stated that the release of a militant of JCAG-ARA, the armed branch of ARF-Dashnaksutyun, will embolden Armenian radicalism. Recalling the role of the afromentioned 1920-1922 terror campaign and the Tehlerian trial as an important episode in this period as two of the main components of the Armenian nationalist narrative, as well as the role of the double assassinations in 1973 in the emergence of the 1975-1985 terror campaign would help to grasp the potential relationship between Sassounian’s release and the encouragement of Armenian radicalism.

This narrative instills into the minds of the Armenian youth the idea of “revenge for justice” or “revenge that brings justice” and that murdering the Turks is fair, legitimate, forgivable and an act that would not require a price. As such, the Tehlerian myth had been a central role-model for the militants and the sympathizers of the 1975-1985 terror campaign. Likewise, the double assassination committed by Yanikian in 1973 had been a motivating factor for ASALA and JCAG-ARA; The Yanikian role-model of the revenger that “made the Turk pay for his deeds by his blood” had been used to radicalize the Armenian youth to convince them in adopting terrorism as a method.

It would not be wrong to expect that the release of Harry (Hampig) M. Sassounian will help to re-instill similar ideas - the idea that violence and terror are legitimate and forgivable methods that is subject to impunity. It is not wrong to expect that ARF-Dashnaksutyun and other radical Armenian groups will use Sassounian’s release to strengthen such ideas and perception. As to that, it is necessary to remind that USA, France and several other countries are already homes to potent Armenian organizations that act upon radical ideologies and an essential enmity towards Turks. One of the latest practical manifestations of this radicalism and hatred was staged on 10 November 2016 in California, the American State that decided for the release of Sassounian, by the youth branch of the ARF-Dashnaksutyun. On this day, ARF-Dashnaksutyun youth raided two conferences organized by the Turkish community in California at which Prof. George W. Gawrych was to speak about Ataturk at California State University Northridge and Chapman University. Unfortunately, assaults as such take place quite often in the USA and Canada, and observing an increase in the frequency and intensity of such events will not be surprising following the release of Sassounian.

It is highly expectable that a myth similar to the Tehlerian one, which is being touched upon more frequently in the recent years by nationalist Armenian authors, that encourages hatred and legitimizes violence and terror will be created by radical Armenian organizations and nationalist intelligentsia.  As a matter of fact, Armenian-language press from time to time quotes Sassounian as saying that he is not regretful for the murder he committed.

It is necessary to question what the release of a terrorist that murdered a person means when the ugly face of terrorism is more apparent than ever, the number of the victims of terrorism has reached enormous numbers, and fight against terrorism is at the top of the agenda of the international community. Those who made this decision will certainly be responsible for the consequences of their decision.